Yes, there is one in the nightmare, and until the DLC I think it was the only one.

All of the other Blood Rocks come from chalice dungeons. IIRC you can get up to 3 from treasure chests in random dungeons and beating the final boss of any Depth 5 dungeon has a chance to drop one.

It just occurred to me that this game’s analogue of “going hollow” (being blood drunk) is almost exactly the opposite, conceptually. I don’t think it’s really significant, but it is interesting, to me anyway.

Oof. You said it.

We thought we had the fight figured out after we finally managed to get it down to half health and then whamo, second phase time.

Ran out of steam (and blood vials) after that. Going to hack away at him solo for a while before heading back in there with my buddy.

This DLC has been amazing.

Should I go back and kill Laurence before Orphan? Or does it matter?

I don’t think it matters, but Laurence may be a bit anticlimactic after Orphan. He was hard, but not Orphan hard, and OoK has some nice set dressing after the battle that will make you feel as though the DLC has been brought to close, which may make it feel a bit weird to have to turn around and go back to beat Laurence.

Made a new character and fired this up for the first time with PS+. Wow, what a change. Messages and bloodstains everywhere. Also I missed killing the tutorial beast with my bare hands by one hit again.

Is this because of the return to old yharnam event?

"The event runs from October 5 to November 5, and the rules are simple: start a new character, dress to your liking or choose from a list of costumes to assemble, and invade as much as you can. The subreddit explains that the event is being shaped by responses that garner the most upvotes. So far, the community has decided on two unique costumes, the exact start time, and instructed participants to use invasion and resonant bells to “add a lot of life and community vibes to the game for the month we are returning to Yharnam.”

The Return to Yharnam Halloween event begins just after midnight on October 5 in no specific timezone. Check out the subreddit for suggestions on costumes or to make your own impact on Bloodborne’s 2019 community-driven Halloween event."

One day online Bloodborne will be free from the shackles of PS+. I’ll wait for that day to join online.

Oh actually, we already know a way. I should get a month of PS Now sometime. That will give me online access for a month without paying too much. I wonder if there’s lots of messages in the Old Hunters?

That first “corridor” in Central Yarnham really does suck ass.

I restarted the game couple of times and always lose interest, when I reach the turret/sniper level. It is annoying, and the guy is also tough to beat. Reminds me of the silver archers in Anor Londo …

old yharnam area? he’s on top of a roof …

Ohhhhh, yeah. Djura. It is somewhat annoying, but thankfully quite brief, and you don’t actually have to kill him (although of course I did, much later on after I was considerably stronger and had the drop on him).

I don’t think I really like the summoning system in this one.

On the plus side: I can signal my desire for a summon.

On the minus side:

I definitely prefer the old soapstone system, where I could see both that there were people offering help and where exactly they were offering it, and I knew when I summoned them they’d pop in right there. I wish they would have just added a stone that allowed you to put down a sign signalling your desire for help with a boss that players could just run up to and touch to get summoned into your world.

The Insight consumed gets returned to you if you abort the summon. (That got added in a patch at some point)

Bosses are way easier co-op (at least so far). And with Fr. G’s demise my outfit is complete: 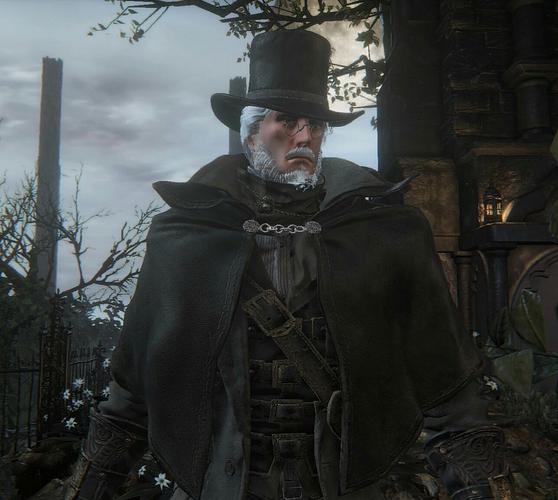 Been bashing my head against Orphan for what feels like months now. I’d jump in once or twice a week and go at him until I ran out of vials. DLC in souls games have a way of knocking my feet out from under me, really halting my momentum, but I was determined to finish Bloodborne before the end of the year.

Had a good chunk of free time on Saturday, so in an effort to knock the rust off, and get our mojo back, my buddy and I each took down Laurence (separately) and then polished off the remainder of the base game (Mergo’s Loft; Micolash; Brain; Wet Nurse) before going back for Orphan.

I don’t know if it was the extra levels we got (was level 91 on all previous Orphan attempts; ended up at 101), or if going through a new area really had us on our game, but we ended up taking down Orphan on the first attempt in my buddy’s game, and on the second attempt in mine.

I’ve felt some really high highs playing these games. I didn’t think anything would touch the joy I felt after beating the final boss in Sekiro, but the Orphan kills were on another level.

Gehrman and Moonchild weren’t much of challenge coming off Orphan. Fun fights nonetheless. We ended up co-oping both on my buddy’s game, and since he was funneled back into NG+ immediately after, I took them both down solo. Which was a nice wrap for a game I played almost exclusively co-op. This is the only souls game where I managed to complete all of the DLC and all of the “optional” bosses.

I’m a little bummed that I sat out this whole souls thing for as long as I did, but that said, playing them all in one year has been the best gaming experience of my life.

I don’t think I’ll be able to finish Demon’s Souls before the end of the year (but maybe? I have a stretch of time off starting Friday…), but I had a good run taking on DS 1-3, Bloodborne, and Sekiro (along with Hollowknight, Surge 2, Remnant, etc…).

Bloodborne turned out to be my favorite souls game. One of the best games I’ve ever played. And probably THE game of the generation for me.

If they remaster it for PS5 I will probably never stop playing it.

Bloodborne turned out to be my favorite souls game. One of the best games I’ve ever played. And probably THE game of the generation for me.

Yes this is the correct response to Bloodborne. Grats!