Sequel has been announced: BloodLust 2: Nemesis.

Good, good. Hopefully, the guy doing this has sat down and had a hard think about streamlining the loot system, and has learned enough from the first game to not repeat those “oops, this is my first game so plz forgive me” design stumbles.

Oh yay! I really loved what I played of the original, until I got stuck and gave up.

Good, good. Hopefully, the guy doing this has sat down and had a hard think about streamlining the loot system, and has learned enough from the first game to not repeat those “oops, this is my first game so plz forgive me” design stumbles.

To be fair, the guy has made a lot of games over the last 20 years, it’s just that they were all apparently adventure games.
http://www.lasthalfofdarkness.com/

That’s a far cry from the Bloodlust game. I liked a lot of what he did but things kind of broke down and became repetitive with the endless dungeon scaling so I hope he refines that. I thought the RPG elements of the game were very solid and overall it gave me a good VtM - Bloodlines vibe. I’m really looking forward to the sequel. It was obvious that the first one was done by one guy on a budget. The second one looks a lot better asset wise.

It’s early access, Brian. Get out of your bunk ;)

Okay, I couldn’t wait, I bought it, and WOW is it already better than the original. Less janky, larger levels, more weapons, more enemy variety, simple controls, great sire system. I am sooooo liking this so far.

You guys, even in early access, this is a blast. I’ve made it down to the fifth level of the dungeon for the quest I’m on, and the variety of bad guys just keeps improving, along with the variety of weapons. I also love some of the quality of life stuff, like your stash being on nearly every level, along with a merchant.

You’ll still be doing the inventory tango because there’s SO MUCH STUFF and a lot of it needs to be identified, but it’s still so cool.

Also I like how your class changes based on your stats. I started as a witch, but because of some of the equipment I got, I got moved to thief. This changes, it seems, abilities you can learn. Also turning in artifacts to the various clans and improving your rating with them also unlocks new skills. I can now summon two crows and spiders to fight alongside me, ALONG with fire, lightning and my two sires. It’s GREAT.

Bloodlust Shadowhunter uses the Unreal Engine so performance should be very good and the engine’s lighting has always been great for colors, mood etc. The dev outsourced assets this time around so I’m sure they’re much better. Especially the animations which were janky in the first game.

Although I did love the first game, the amount of actual content and story before you got to the endless dungeon as your only choice was pretty small. Although that’s to be expected with a single dev.

I think the first one worked pretty darn well as a first person diablo style, dungeon diving loot quest except for a few things. First, the number of classes were very small so there wasn’t really all that much to experiment with as far as class building. Second, the loot and the dungeon levels were very repetitive without a lot of variation to keep you going. Third, there weren’t that many mob types which also made it repetitive.

I was excited for the second game but from what I’ve read so far, it looks like those may still be the main problems. The story is only about 10 hours long before your get to the random, endless dungeon diving part, so still very little content in the new one. It’s early access so hopefully he can expand on that. There’s only 3 classes and they appear to be basically the same ones as the first game. I’m not sure about the enemy variety.

I’ll probably get it anyway because it’s a lot like Vampire the Masquerade Bloodlines in a lot of ways. Plus, the developer really knows how to nail mood/setting for these types of games. I find it hard to be quite as enthused about it as Brian is, though.

I find it hard to be quite as enthused about it as Brian is, though.

Some of us are merely human.

Did development on the sequel end? I was reminded of this project, and it looks like nothing has happened since the beginning of November.

Weird, the SteamDB Depot says it’s been updated more recently than that: 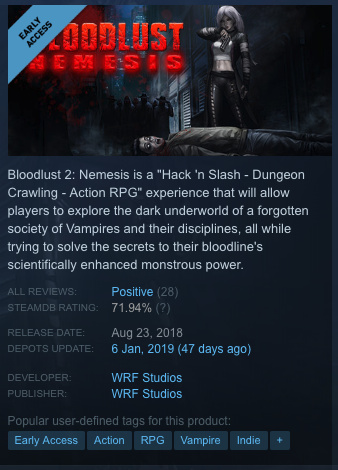 Neat. I enjoyed the first game for all of it’s single-guy indie flaws. And $13 sounds like just amount for entertainment I want to spend this weekend