As for “not a very good one”, I believe I quite enjoy several games you think are not very good. :)

It should go without saying that I’m sure there are plenty of people who enjoy the Shadowrun deck-builder. I look forward to your glowing comments!

He, he. Fair enough. That will unfortunately have to wait until I finally manage to source Dune Imperium and Lost Ruins of Arnak, the 2 Deck Builder / Worker Placement hybrid games I’m currently eyeing as a nice twist on the genre.

I have the original edition and it’s quite hard and the campaign elements/variety aren’t strong, but it’s kinda fun? And yes, it’s coop. And a deckbuilder, not a bag or pool builder. I’m curious about the Prime Runner changes but…probably not enough to rebuy it. Actually, while it’s not yet across my “eliminate from your collection” threshold, it’s probably going to hit that point whenever I get rid of the stuff that is and still need to make more room. Just not that into it compared with the competition.

I have not. I see the Dahlgaard’s Academy expansion adds a David Turczi bot for solitaire play. Have you tried it? Unfortunately, it looks like the core game isn’t available anywhere.

I emailed Mindclash about this recently and a new print run is coming “soon”.

He, he. Fair enough. That will unfortunately have to wait until I finally manage to source Dune Imperium and Lost Ruins of Arnak, the 2 Deck Builder / Worker Placement hybrid games I’m currently eyeing as a nice twist on the genre.

Seriously, though, if you’re a big Shadowrun fan, the theming will probably carry it for you. I just need more than “blue = magic” and “green = hacking” in my gameplay mechanics. In Dune Imperium, for instance, the different factions and resources have distinct roles in the gameplay systems, in how they’re used, in which other systems they feed into, in their role in the gameplay economy. It’s a really imaginative implementation of the theme. I would have loved to have seen that done with Shadowrun’s goofy fantasy-meets-cyberpunk world, but I felt like they just slapped labels onto generic resources and called it a day.

I do think there’s some distinctions between what magic, hacking, etc do mechanically, but there aren’t a ton of different cards and you don’t get to buy them very often so it doesn’t come through very strongly.

RE: the Shadowrun deck-builder

I do think there’s some distinctions between what magic, hacking, etc do mechanically, but there aren’t a ton of different cards and you don’t get to buy them very often so it doesn’t come through very strongly.

Where it really falls apart is in the cards you have to beat. Events or crises or nemeses or challenges or whatever they call them. Good luck finding any meaningful theming there. It’s incredibly half-assed, like they couldn’t even be arsed to try. So 90% of the game is absolutely “if it’s blue, it must be magic!” with a couple of cards you might add to your deck possibly hinting at some rationale for how magic could, perhaps, if you squint, work in some way to sometimes, on occasion, be slightly different from hacking and shooting. And don’t even get me started on how utterly irrelevant the different races are.

I mean, I can see the game Shadowrun is supposed to be. Unfortunately, I’m invariably left playing the half-assed game they actually made.

Yeah, they really missed a trick by having the race options be purely cosmetic. And even the “levelling” barely matters. Some of the expensive karma stickers have more dramatic effects but since the base game only came with 3 scenarios and 2 of them expect you to grind the first one quite a bit to be “on par” with them (if, again, the stickers actually upped your power level very much), that’s a lot of doing the same thing to get there. Which, sure, most deckbuilders that’s just the game and that’s fine. But Shadowrun doesn’t have the game to game variety of most deckbuilders or the modularity of many, and it teases this progression mechanic.

Warp’s Edge is currently my main candidate for a solo game purchase alongside Under Falling Skies .

I’ve been having difficulty locating a copy of Under Falling Skies, at least for anything approaching a reasonable price. Haven’t heard of Warp’s Edge though, have to look that one up.

Under Falling Skies is really good…except for one really important thing. :( I’m finishing up a review now which I’ll post soon. But I like it more than I thought I would.

Warp’s Edge is currently my main candidate for a solo game purchase alongside Under Falling Skies .

I’ve been having difficulty locating a copy of Under Falling Skies, at least for anything approaching a reasonable price. Haven’t heard of Warp’s Edge though, have to look that one up.

Just grabbed both of these…UFS was pretty expensive but oh well…will try them both after playing a few solo Dune Imperium games.

Part of the issue sourcing it is that I’m definitely not willing to overpay while stock is low. It’s a smaller game with relatively modest components that retails at £26 in UK. It’s not mean to be expensive. I’ll get it when it gets restocked.

That said, I’m sure you’ll have a great time with it. Looking forward to some impressions.

Nice! Although that requires synchronous play and Discord is asynchronous.

Sorry if this has been pointed out, but most games on BGA allow asynchronous play, including Quetzal.

So my board gaming group was talking about the various aspects of games we like and one of the guys said he likes “turning things into other things” which sounds simplistic and yet resonated with me. For example, our group likes a number of Uwe Rosenberg games including Le Havre, Agricola and Feast for Odin, all of which involve “turning things into other things” in interesting and/or strategically demanding ways.

I’m wondering what other good medium to heavy Euros out there involve “turning things into other things” in interesting and strategic ways. Resource conversion, production chains, etc. What are some good suggestions for my group to contemplate?

Have you checked out Oh My Goods? It’s all cards, but is all about setting up production chains. And it’s super compact; easy to take anywhere.

And if you haven’t tried Rosenberg’s Ora et Labora, you really need to.

The last caveat is storage. Between the small core box, the flimsy Dunwich Starter Set and the plastic wrapped mythos packs, you will be out of storage in no time and wondering how to sort and store your cards.

LoTR and Arkham Horror in the same box. All cards sleeved. The total solution costs about $30. 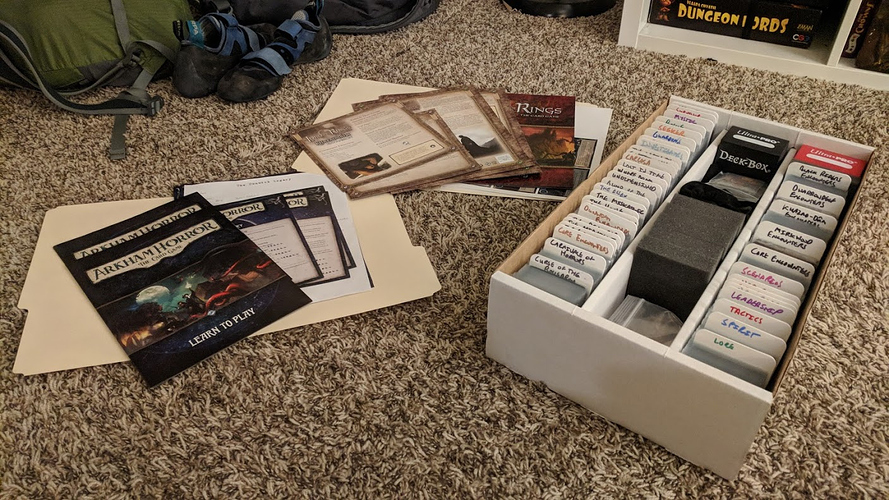 Sorry if this has been pointed out, but most games on BGA allow asynchronous play, including Quetzal.

True, but we were talking about TTS.

Tom,
I won’t deny the miniatures are a total gimmick but they really do add to the table appeal and theme. That said, the game offers multiple paths to victory, 4 different types of workers, asymmetrical clans to play and tons of modules (all of which are good and make the game feel different).

The cataclysm is a warning bell that the game is almost over. Now actions on the board are going to speed the game up even more. It’s one way to score a lot of points but it’s not the only way and you can win even if you don’t prepare for the cataclysm, but you miss out on a lot of points. I love the puzzle of how many mechs am I going to pay for and hopefully be able to send to the main board this round? Am I going to do that first or use what’s on my board first? What loan am I going to ask for and how am I going to pay off the 3 I already have? I love the constraint of not enough workers, worker spaces or time to complete everything I want to do. You feel the pressure of being under the gun to get things done. I will say watching Anachrony played is not as fun as actually playing it. I can go into more of the game if you want, but I think you really just have to play it. I’m not saying it’s for everyone, but if you like unique worker placement games that burn your brain, take a look. Besides, I’ll take time travel Armageddon over farmers and sheep any day of the week. I have yet to play a bad Mindclash game.

Oh! Did I mention the customer service is amazing? I was missing a piece in the game and wrote them asking if they could send it. A few days later, I realized that one of my mechs was missing an arm ( did I mention I had already started painting them) . Well they sent me one of those too. 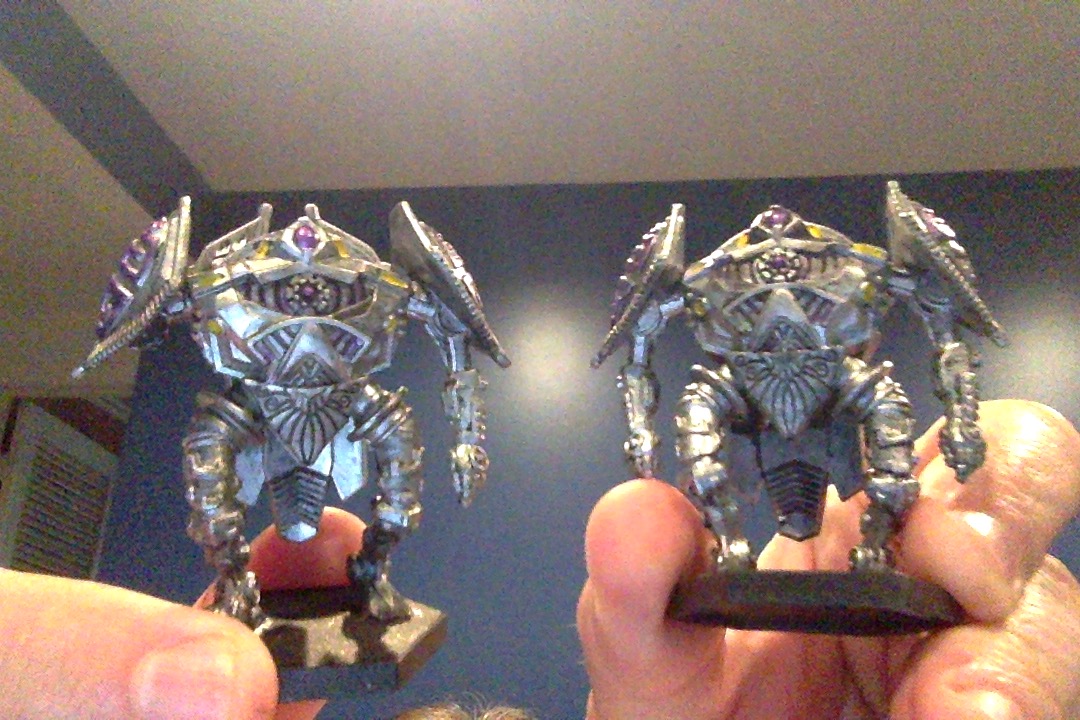 Have you tried Agra?
Full disclosure, I haven’t played it and I hear the rules are a bear to learn. That said, once you know the rules game is really, really good (so says, Paul Grogan).

Ora and labora and Merkator are all about resources into other resources.

Yeah, we play Ora et Labora - we love Uwe. One of the guys actually scanned in the Ora cards and tiles and made our own TTS mod for it, which we use.

Is this based on the video game or vice versa?