Rule book says each character gets their own deck of 80 of each.

Doesn’t say nothing about sharing cards, at least not that I’ve seen so far.

Right. In any given campaign, you will play with up to one character of each color, each of whom will have a card pool (but not active deck) of 80 cards. But there are three characters of each color, one for each campaign, and Niamh is a switch hitter. So the blue cards that don’t have Beor’s name on them will be used for the blue characters in Last Knight and Age of Legends as well. Same with the other characters. You can also, if you have Niamh, choose to use her in place of the character that would usually occupy a given color in that campaign, and she will use the cards of that color, but add in the ones with her name on them instead of the ones with their name.

That makes slightly more sense but strikes me as quite the opposite of elegant.

And I think I have figured out the attribute advancement, after having read the rules for…hmmm…the 8th time.

And this is how I would have written that rule. 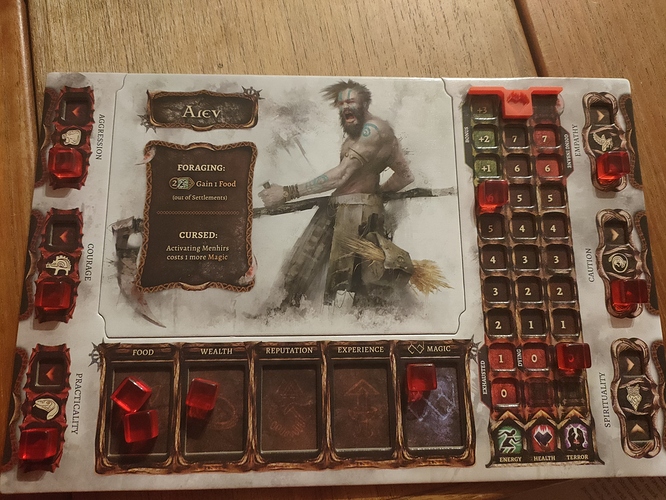 Agression and empathy are a pair.

So are courage and caution.

So are practicality and spirituality.

Count the number of existing red blocks in the pair, in this case 2.
Then add the attribute you wish to increase, which makes a total of 3 red blocks.
Then multiply this by 2.

And this is the actual rule. 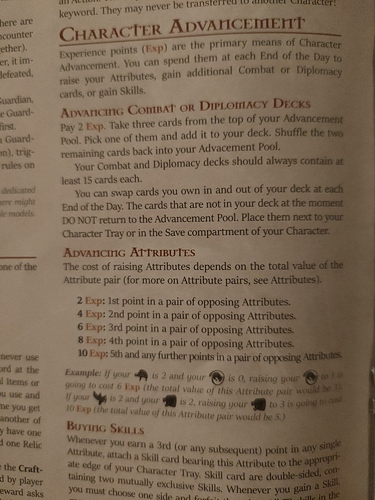 I don’t really see any difference except that you explicitly state which attributes are opposing, which they do earlier in the rules and is pretty obvious from layout IMO, and the exp cost actually caps out at 10, so your formula is only how it works for the first five points. -shrug- Anyway. I can try and help (preferably in the 2021 thread) with any questions you have but obviously you and I had different experiences parsing the rules. :)

I hate to say this, because I went all-in as well, but Tainted Grail is trash. Seriously, one of the worst designs and implementations I’ve tried to slog through in a long time.

That said, I’m kind of tempted by ISS Vanguard. But I’m not buying it now. I’m going to wait for wave one to ship and reviews to come out. If Awaken continues this policy of reopening pledge managers after wave one ships (like they’ve done for Etherfields), maybe I’ll buy it then and just play it when wave 2 ships.

If they don’t reopen the pledge I’ll probably have forgotten about Vanguard by then so I can make myself feel better buying something else.

Both great examples. The various problems with Twilight Struggle that have since been solved with the invention of good boardgame design are 1) the playing time, 2) the overreliance on the whims of a d6, and 3) the importance of having to know the entire deck in order to play well. @Brooski will argue that #3 is actually a feature, and I don’t necessarily disagree. But it means that Twilight Struggle is not a good game to play unless you’re playing with someone of the same skill level (i.e. who knows the deck as well as you). And I’m sure Twilight Struggle fans who know the cards value how this informs the game, but it makes it less friendly to casual boardgamers, and especially to boardgamers who play a bunch of different games with a bunch of different people of different skill levels.

As for what games specifically obsolete it, The Expanse is a good sci-fi version of the basic concept. You’ve played it? I only got in one game before the pandemic. :(

I really like the 13 Days and 13 Minutes games as much shorter and compressed Twilight Struggles. For the specific Cold War theming, Ian Brody’s Quartermaster General: Cold War is my favorite in the Quartermaster General series. Really awesome interplay among three asymmetric sides and a great system for tracking escalating tension and possible nuclear exchanges. It does have that same issue as Twilight Struggle in that knowing the cards will give someone an advantage over someone who doesn’t know the cards, but it doesn’t dictate the game as much as it does for Twilight Struggle.

As for what games specifically obsolete it, The Expanse is a good sci-fi version of the basic concept. You’ve played it? I only got in one game before the pandemic

Not as much as I’d like. We usually have (had) more than four in our group.

The various problems with Twilight Struggle that have since been solved with the invention of good boardgame design are 1) the playing time, 2) the overreliance on the whims of a d6, and 3) the importance of having to know the entire deck in order to play well.

Thanks for the suggestions! I’ll check out The Expanse and the 13 Days game you mentioned. What mitigates #1 (and to some degree #3) for me is that the digital version of the game supports asynchronous play and is a really good implementation. But it get it that we’re talking about pure physical games here.

The various problems with Twilight Struggle that have since been solved with the invention of good boardgame design are 1) the playing time, 2) the overreliance on the whims of a d6, and 3) the importance of having to know the entire deck in order to play well.

Thanks for the suggestions! I’ll check out The Expanse and the 13 Days game you mentioned. What mitigates #1 (and to some degree #3) for me is that the digital version of the game supports asynchronous play and is a really good implementation. But it get it that we’re talking about pure physical games here.

Ah, yes, excellent point. My whole thing about “the invention of good boardgame design” is entirely about the act of gathering friends around the table for an evening. For instance, I think Through The Ages is terrible boardgame design for various reasons (too long, too demanding to new players, too easy to spend too much time in last place). But it’s an awesome videogame. I can definitely see that case being made for Twilight Struggle.

I like TS a lot, but will agree with this. It is, however, a strength when playing the game with someone who knows it.

It is a game that justifies learning the cards and interactions, there is a deep rich strategy there, but winning because someone didn’t consider the DEFCON implications for holding Duck and Cover and Olympic Games, because they didn’t know those cards existed, isn’t ideal. It is absolutely not a game I would play with my wife. But is one I would, and have, enjoyed playing with Bruce.

I fully expect ISS Vanguard to be another banger of a game, since unlike Tom I loved Tainted Grail and would rate it among my all time favorites. But there’s doubtless no rush. And that would give you the chance to get opinions from first wave shipment folks. 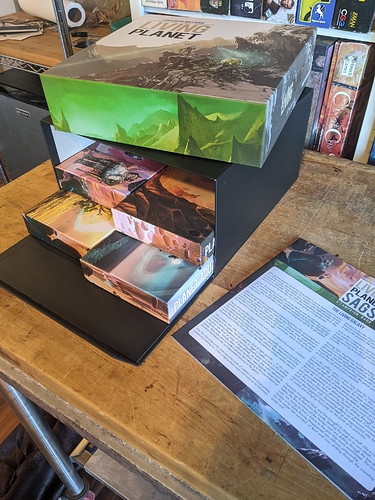 Got my fancy Deluxe KS edition of Living Planet in the other day. After looking up info on it, I really wanted the additional planet expansions, and it looks like they aren’t getting released to retail? So hunting up the Deluxe version was the only way to go.

Going through it, though I see that it has a SAGS (Scenario Auto Generating System) system for combining the various parts- an idea appropriated from Boelinger’s cool/weird-ass small unit tactics boardgame Earth Reborn that never took off, sadly. But in the LP SAGS book it also has a bunch of campaigns, including a couple of solo ones. So I’ll get to kick it around sooner than expected, at least a little. @tomchick, do you have the retail copy? Did it come with the Campaign book? I’m curious.

My shelves would appreciate it if you didn’t make me want to play Tainted Grail.

Tom can you sell me Tainted Grail?

Just sold 1700 USD worth of games from my collection ie most of it. And the one overriding emotion I’m now feeling?

Of course I have great memories from all* the games that just headed off in the courier van. But I wasn’t creating new memories with them. To go all ‘Marie Kondo’ - they weren’t sparking joy any more. Mostly just guilt…

So if you find yourself in a similar situation, let me recommend that 2021 be your ‘year of the purge’. It feels good. :)

*Excepting my nearly three year old copy of Star Wars Legion. As I was packing the partially painted minis back in the box for shipping I noticed that I hadn’t even gotten round to punching out the tokens. My son drove the final nail home when he exclaimed “You’re selling it? But we didn’t even get to play it.” :(

never, I almost always regretted to sell any books, videogames or boardgames. The time will come, when I will miss the one or the other. Once, I sold the Dark Souls guide book. I had to buy it again for more than I sold it earlier. Now I own all Dark Souls and Bloodborne tomes. Never sell anything. Ever.

There are actually like 15-20 games I’m trying to eliminate from my collection, but I obviously don’t want to throw them away and want to see them go to someone who actually wants them. And yet, I also don’t want to try to figure out what people think they’re worth, or package and ship them (especially now with COVID). So, they sit on my shelves. -sigh-

My girlfriend was at one point going to handle it for me (for a cut of the proceeds, natch) but I think she’s not really up for it anymore. If she ever actually got going on it. She likes helping out with stuff but is…easily distracted, shall we say?

@tomchick, do you have the retail copy? Did it come with the Campaign book?