In that case I give you permission to instead implement the “year of selective pruning”. :)

Just sold 1700 USD worth of games from my collection ie most of it.

How did you do it? I seriously have about 200 boardgames I want to get rid of, and I’m tempted to just post a list on BGG that says, “Hey, anyone who wants to meet with me to hand these off in Los Angeles, they’re yours for [insert absurdly low amount here]”.

I’ve bought and sold a few things on BGG, but I really don’t have it in me to list and price and pack and ship 200 separate games just to maximize my profit. So how did you do it?

My wife agreed to take 5% of the proceeds, but after she spent the evening wrapping individual X-Wing minis in little flannel sheets for packaging purposes I deemed her worthy of a…15% cut. Yes, generous beyond words… :)

You’re right though, the packaging step was a real hassle. It helps if you have the right tools on hand though - a large table, a stack of old boxes/cardboard, packing materials (paper or foam), a sharp craft knife, and lots of packing tape. I’m also lucky to live in a country where a significant chunk of the population lives in a single city (where I’m located) so at least a third of my sales were pickups from my home.

I was honestly looking at just selling them to Half-Price Books or giving them to Goodwill - no guarantee they’ll end up with a good home, but it’s an easy one stop dropoff and since I don’t really super care about getting money out of it, the low-to-no return isn’t a big deal, but my girlfriend thought I should at least try to sell 'em properly. I dunno.

Small country here (NZ). We have one main auction site called trademe so I just bunged them up on there for a very ‘sellable’ price ie a deluxe expansion for AH LCG plus all the corresponding mythos packs for a start price of 70 USD and no reserve.

Everything gets a bid (so I know I’ll get rid of it and not have to worry about re-listing) and once bidding starts you only need a couple of people to drive it up.

For standalone games the packing isn’t quite so bad. Everything is likely in the box already (hopefully in shipping friendly ziploc bags), so you just chuck in some foam or screwed up paper to stop things shifting about and then wrap it in cardboard or in a cut-down-to-size old box. A bit of packing tape to hold it all together and you’re done. The trademe site even prints the courier labels for you (based on what the bidder chose) and then we just leave them at our back door for the courier to pickup (it sends the booking at the same time you print the label).

For games with a bunch of extras (eg expansions that don’t fit in the main box, or…anything made by FFG) then, yes, it’s a bit fiddly. First you have to make sure you’ve included everything (eg I had spare tokens for one game somewhere in the closet), and that’s made worse if you decide to split a large collection of one game eg having to divvy up all my AH LCG cards by cycle.

Packing takes a while but, as I mentioned above, if you can set up a production line of sorts you can just chuck on some music and happily cut and tape for a few hours.

And that’s one of my problems: I can’t have carrier services pick up packages, because I live in an apartment building with no buzzers and no office. And I don’t drive, so getting them to a place to ship them is…a problem.

EDIT: posted as an addendum to my previous post (and what Tom had asked), not a reply to @malkav11’s post above! :)

Presumably you have the option of stating ‘pick up only’ on your auction sites. If you’re in a large enough population centre (and I’m guessing LA would count!) then while you are limiting your potential audience, it wouldn’t be that bad. Heck, LA has a bunch more people than my entire country, and I was pretty satisfied with what I was able to sell mine for.

Pick ups mean you can skip the whole packaging process which is 80% of the effort. I don’t know if things are different in other countries, but here in NZ it’s perfectly normal to just have buyers pick up from your house or place of work.

Aww, I didn’t mean to rub it in. The SAGS/Campaign book makes a lot of references to “If you only own the base game”, and it was in the main box, which is why I asked- it seemed like it could have come with the retail edition, and then you’d have a way to play solo. Ah, well. 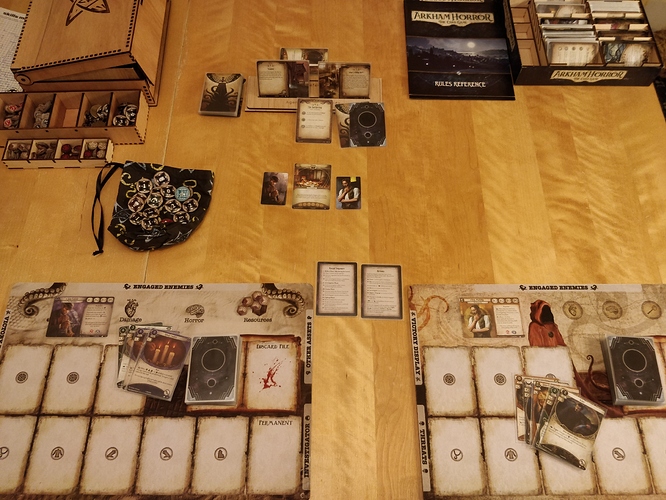 Word of warning on Arkham Horror: the game is really not that complicated rules wise once you get into the flow of a turn, but boy is it not gentle; especially if you pull the wrong skill test token several times in a row. How OK would your girlfriend be losing scenarios? Would that discourage her?

Since you are new to deck builders, you might want to consider starting on easy. Because even normal is anything but at times.

I started my first 2 handed solo evening full of hope and humming a catchy jazz melody, gathering clues like there was no tomorrow. 2 hours later, one of my investigator had lost all their sanity and the other all their hit points. That went well… :)

When we moved I let go about 100 games. I would suggest looking at Meetup for some local players that could pick up games. I was lucky enough to have two people volunteer to put all the games up on the local site and brought the games to their meets for me and I just gave them a game or three.

Another idea would be to donate them to a local game convention for their library or even the local library if you are not concerned about making any money.

The problem I found was most boardgamers I knew already had the same games. So I did donate what ever couldn’t be sold to a gaming convention.

I made about 500 dollars and still gave about 30 games away.

4 posts were split to a new topic: We’re playing Fantasy Flight’s Marvel Champions! Excelsior, ‘nuff said, clobberin’ time, I can do this all day, etc., etc.!

Yep, that’s one of the games I purged.

It was “fine”, and I liked the theming, but I didn’t feel like there was enough of a difference between a lot of the heroes. Admittedly I only owned the core set and with additional expansions I imagine you could get more into the deckbuilding and produce decks that were a little less generic, but I wasn’t prepared to go down the slippery slope that is FFG’s business model for a game that seemed…merely okay.

I’ve unloaded some games using a local (NYC) Facebook group for trading and selling games. It looks like L.A. has an equivalent group: https://www.facebook.com/groups/labgm.

Look before anyone goes crazy. I’d love to see if anyone has any games they want to trade. I have a bunch of games to sell and trade and would be happy to keep it in the family as it were.

Do you have a list on BGG as Shieldwolf?

I feel like Sentinels of the Multiverse already solved the whole superhero card game thing. Not that everything G>G put out for Sentinels was perfectly balanced or a good idea, but prebuilt unique decks for every hero (and villain, and environment) gives way more personality and identity than trying to make deck construction part of the game. And it’s a great way to have long term variety and easy expandability without the investment being in any way mandatory.

If Marvel had just licensed G>G to do a Sentinels compatible Marvel game I feel like we’d be in business. Oh well. In the meantime, maybe someday Sentinels of Earth-Prime (featuring the characters and setting from Green Ronin’s Mutants and Masterminds RPG) will come out. And at least the Sadlers are following in those footsteps, though I personally skipped their supers game as their comic book universe seemed uncompelling and I don’t really need a second supers game of that sort when the main thing it seemed to be doing differently is having a pile of minis I didn’t want or need.

Thanks for all the advice Wendelius, and Tom! She doesn’t mind losing that much, but she’d much rather win.
We’ve put this a bit on the backburner though, and will instead do a little bit of Call of Cthulhu Rpg gaming, since I’ve also aquired the Starter set of that :-D

Oh nice! As I mentioned in the RPG thread, I play that on Wednesday nights and am having a blast with it. From what I hear, the starter set scenario is a really nice little story too. Have fun!

I don’t agree that that’s a problem that Sentinels has.

But I can’t compare the two directly, because I’ve not yet played Marvel Champions. Hearing that you don’t have to deckbuild increases my interest, certainly.

I would highly recommend playing Arkham LCG on the easy difficulty if it’s your first time running through a scenario and you aren’t a deckbuilding min/maxer. The difficulty was way too frustrating for us on medium, but was perfect on easy.