The expansions help it along, but it never really becomes sufficiently better to escape its basic problems. Although it’s been a long time since I’ve played that I can’t dredge up the specifics.

Good week. The most interesting plays were Brian Boru, Shiver Me Timbers, and 1979.

I am a sucker for underrepresented historical themes, so 1979 is intriguing. I’m curious to know how it “feels,” if that makes sense - Watergate-ish? Twilight Struggle-esque? Fog of Love-y?

Speaking of dry historical themes, last weekend I played Cave Evil, which simulates the necromancer revolts of 1984. That is one goofy, fun game. It deserves to be in wider circulation.

If you haven’t played Bullock’s other game, No Motherland Without, the closest point of comparison is probably Twilight Struggle, although that doesn’t capture it very well. Its coolest detail is the way both players get to play as the “opposition,” although they have very different approaches. When the Coalition is in charge, the Shah mostly erodes their support by whipping third-party factions into a frenzy and protecting his oil interests; when the tables are turned, the Coalition uses worker strikes. In both cases, there are multiple forms of influence on the table. For example, at one point the Bazari or Ulama factions might be useful to you, so you’ll encourage them to spread across the map, but once you take power they’re now extra groups you need to be wary of. It’s a cool system.

Speaking of dry historical themes, last weekend I played Cave Evil, which simulates the necromancer revolts of 1984. That is one goofy, fun game. It deserves to be in wider circulation.

Can you tell us more about this? I bought this game for some reason and even pulled it out when some people came over to play games but we shelved it so I dunno.

First board game night in a long long time tonight. Took it slow, with just a small group of five.

We played Gods Love Dinosaurs, a new game I’ve had for a bit and hadn’t tried out yet. 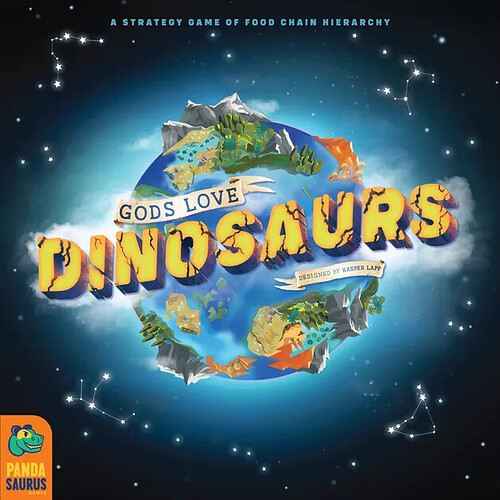 The premise: You’re a god designing a new world and its animal inhabitants. You’re supposed to make a balanced ecosystem, but actually you just want to make lots of dinosaurs. Those dinos WILL need food, though, so you’re basically seeding your world with prey species (rabbits, frogs, rats) and predators (tigers and eagles) that feed on them, and then periodically setting your dinos loose to eat those predators, causing them to lay more eggs (points).

It’s a spacial and planning challenge that emerges from a tight little ecology simulation made out of impressively few elements. The table was kind of split on it; I liked it pretty well. Turns can sometimes go a little slow as players try to plot out their optimal moves. Oddly, when it’s not your turn there feels like fairly little planning/plotting of your own you can do, which might have compensated for the analysis paralysis a bit.

Great pieces. Very clear and colorful artwork across the board. A tidy rulebook that misses some edge cases.

We also played Res Arcana with the 5-player expansion. This is my third or fourth time playing this mystical engine builder from the designer of Race/Roll for the Galaxy. 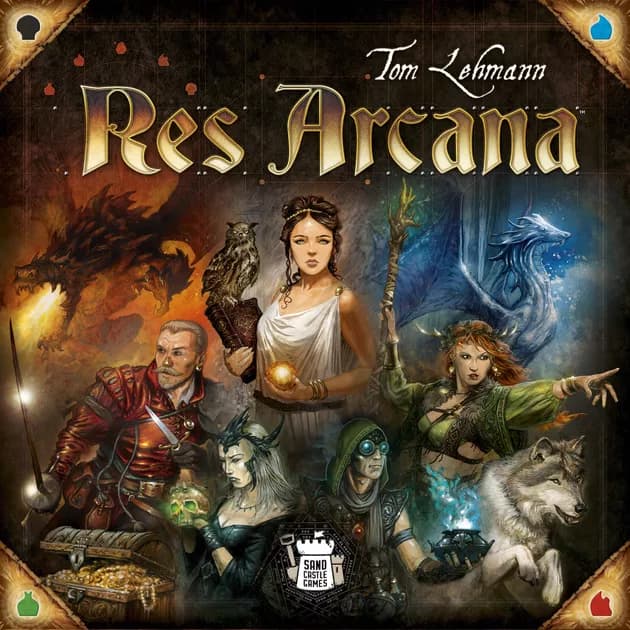 Most players were new to the game, and this one takes some ‘splainin’. (We left out the scrolls from the expansion just to ease things a little, and that worked out okay.)

I really want to play this a lot more, because I think with a group that’s very familiar with the systems and content, it will be a quick and intense game. It feels like RftG, but built off of way fewer cards. Most of the manipulation, swapping, paying, etc is done with tokens representing five colors of essences. And the potential keystones to your strategy–the equivalent of the 6-cost developments in Race/Roll–are right out there available for everyone to see and purchase from the start (not that you can afford them at the start). So you’re not digging and hoping. You’re just cranking up an engine and hoping yours is up to speed before the other guy who might have his eye on the Place of Power you want to control.

The thing with working with so few cards (eight per player, randomly distributed at the start and you don’t get any more) is that it seems impossible for everyone to start with equally capable decks. Not sure if it should be a “draw twelve, keep eight” kind of thing once players are experienced, or what. That said, a deck that looks like a total dud can often somehow lead to a win. That happened in our game tonight. 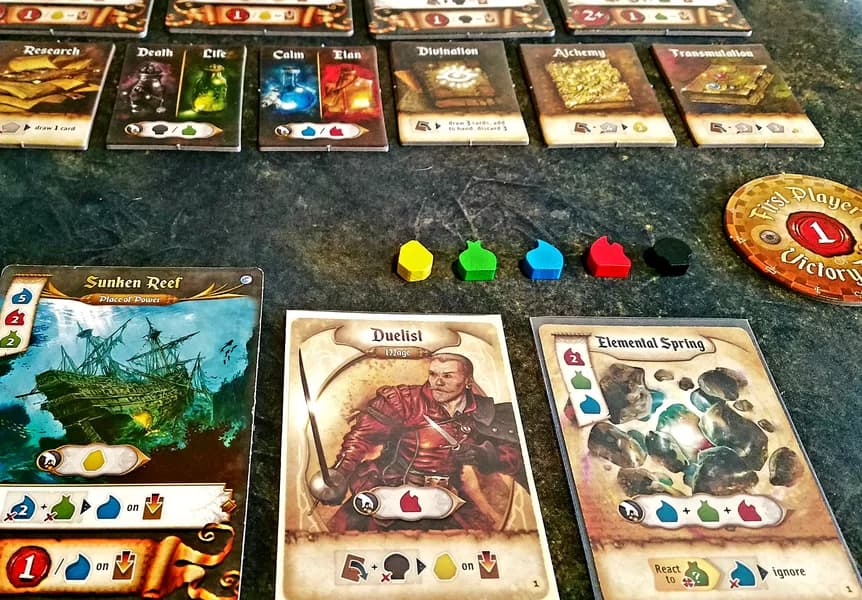 I really want to play this a lot more, because I think with a group that’s very familiar with the systems and content, it will be a quick and intense game.

Yeah, it plays totally differently with experienced players. The first turn takes ages as you’re working out your entire gameplan in your head, and a backup plan in case someone gets your PoP first or you’re unlucky in card draw. Then it plays out really quickly as people execute their plans, and then it’s over in four or five turns.

The thing with working with so few cards (eight per player, randomly distributed at the start and you don’t get any more) is that it seems impossible for everyone to start with equally capable decks. Not sure if it should be a “draw twelve, keep eight” kind of thing once players are experienced, or what. That said, a deck that looks like a total dud can often somehow lead to a win. That happened in our game tonight.

Yeah, I’ve played quite a lot of RA now and sometimes, although much more rarely than you’d think, you do get a deck that is basically never going to win, or at least you need absolutely everything to go right. But the trade-off for that is all the other games that are fantastic puzzles of trying to work out how to make your constrained deck work. I suspect a draft would ruin that magic. Maybe some more ways to get card draw would mitigate that randomness a bit, but it might throw off the balance too much.

At the end of the day, Cave Evil is a pretty straightforward dice-chucker. You’re a necromancer, summoning minions and sending them out to collect resources that are used to summon even more minions and forge equipment and spells that grant special abilities. Every character is on a shared map, which changes as you excavate and collapse tunnels. When your characters come into contact with the enemy, they fight. Last necromancer standing wins.

The theme does a lot of work to elevate the game. Everything has an evocative name: the resources are shadowflame, gore, and metal. My necromancer was the Ice Dead Sorceress. The big bad that emerged toward the end of our game was the Darkest Evil Bitch. And the white-on-black artwork is fantastic. 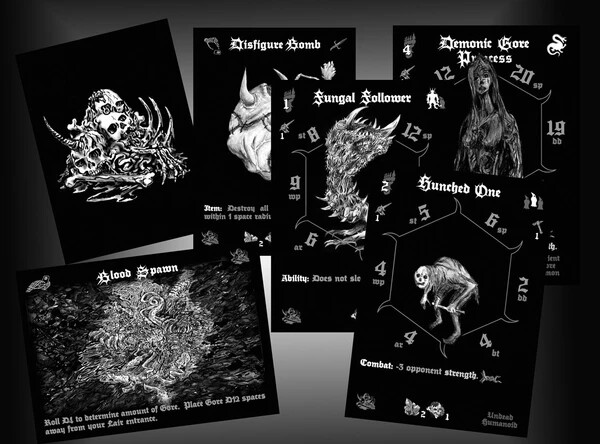 The huge variety of cards introduces plenty of chaos, but also many opportunities for clever plays. It’s just a lot of fun.

Just a heads up, lauded coop trick taking game The Crew is $5 on Amazon atm, not sure for how long:

I snagged a copy. $5 is what the hell territory.

$5 is what the hell territory

That game is worth much more than what the hell territory for me. It’s one of our favourite “quick to play a few rounds/missions” on weeknights.

You have to be ok with trick taking and limited communication. But the puzzles are fun to try and unravel, with only a few bits of information which can be shared by players.

You guys talked me into it, I’ll try just about anything for $5, definitely what the hell territory.

I’ve played through The Crew twice now. I’d definitely recommend it to anyone not particularly familiar with trick-taking games, or as a gateway to that sort of thinking. I suspect it would be far too easy for a bunch of regular bridge players. I played with 3 and 2 players; it feels as though 4 would be best but we didn’t have the players.

I believe there’s a sequel out now (or possibly soon) which addresses a few minor problems and adds more mission types.

I believe there’s a sequel out now (or possibly soon)

It’s out (at least in Europe). SUSD reviewed both The Crew and The Crew 2 a few months ago. 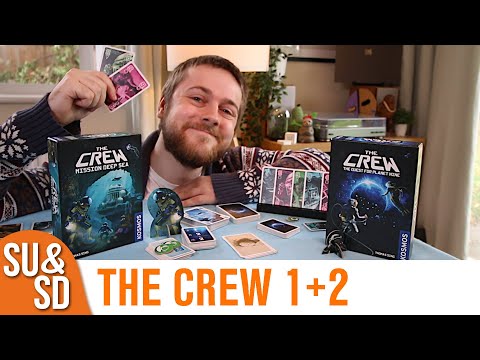 The Crew 2 adds more variety, but might be less approachable for beginners. Personally, especially at $5, I’d start with The Crew and get many hours of playtime out of that one, then decide whether I want more.

We are still happily playing through The Crew. We’ll likely get the sequel once we are done.

Hey, I recognize that picture of Gods Love Dinosaurs!

Cute game. Easy to appreciate, even if it didn’t stay in my collection for very long.

FWIW, both Crews are playable on Board Game Arena.

Die-chucker, more accurately. Combat is pretty simple: every unit has six stats. Each round of combat uses one of those stats. Roll a d12, add that stat, compare totals, highest wins. First player to win two rounds wins the combat.

The attacker decides the stat for the first round, defender for the second round, attacker for the third round. This incentives attacking play.

The end result is that you have a good sense of your chances going into any fight, but unless you have an overwhelming advantage an unlucky role could put you on the losing end.