There’s a bit of awkward Victory Point stink on the third edition of Dawn of the Zeds, but it’s still very good, mainly because the first and second editions were so good. This guy liked it ten years ago and I have it on good authority he still likes it: Clear the table for Dawn of the Zeds, a zombie game you won't want to miss -...

If I can’t livestream boardgames, I guess I can just, well, stream them. Non-live. There’s got to be a word for that. Whatever you want to call it, here is everything you could ever want to know — and then some! — about Victory Point Games’ update...

I feel like it’s a very strong contender for best zombie boardgame.

Yes, but it partly depends on what kind of game you’re looking for. It’s not a dungeon crawler or a Euro or a deck-builder or anything the average person would expect when he buys a boardgame these days. It’s very much a wargame using the states of siege template. But it’s also a perfect example of how states of siege is often an awkward abstraction when it comes to history, but it’s a perfect gameplay engine for a zombie apocalypse!

Remember all the different combat shifts! Named space vs. Town space vs. space with a barricade or whatever it’s called… and remember that shifts aren’t cumulative… no one has ever played Dawn of the Zeds all the way through without making a mistake! It’s great, though. 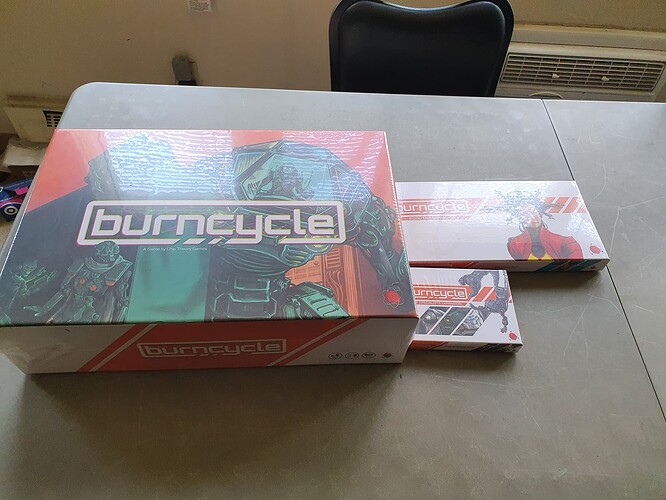 Obviously an adaptation of the classic Phillips CD-i FMV game.

Everdell, Quacks, and King of Tokyo getting to the table tonight. Color me excited

Still my son’s favorite boardgame. If he gets a vote on a boardgame to pull out, it’s pretty much always King of Tokyo.

Yes, but it partly depends on what kind of game you’re looking for. It’s not a dungeon crawler or a Euro or a deck-builder or anything the average person would expect when he buys a boardgame these days. It’s very much a wargame using the states of siege template. But it’s also a perfect example of how states of siege is often an awkward abstraction when it comes to history, but it’s a perfect gameplay engine for a zombie apocalypse!

Interesting. That’s actually a selling point to me, maybe. I find myself at times needing a couple of readthroughs of rules and watching a playthrough video or two to grasp deckbuilding or Euro worker-placement mechanics in games. But traditional war game mechanics? For someone who grew up playing SPI and Avalon Hill games with counters with numbers on them and ye olde Combat Results Chart…well, those are mechanics I think I’ll grasp right off the jump.

That’s actually a selling point to me, maybe.

The problem – this is a theory I have and it’s not based on any actual information – is that Alan Emrich’s “development” in the later editions seems to get more aggressive, introducing little tweaks and add-ons and “wouldn’t it be cool ifs…?” that ultimately weaken the original design. It turns into a messier game, a goofier game, a more pandering game, and in the process, the wargamey meticulousness gets muddied. My feeling is that the third edition is the reaction of a company trying to cash in on the popularity of zombies because, whoa!, it turns out lots of people bought the last edition, so they figured they’d make it easier to play, and think up some paid expansions, and fold in lots of extra pop culture references, and then maybe even more people will buy it! I feel the same thing happened with Chris Taylor’s Nemo’s War, by the way.

I like the third edition of Dawn of the Zeds, and I’m glad it’s a hit. But I feel like the supposed course correction it was trying to make from the second edition was mostly a mistake.

is that Alan Emrich’s “development” in the later editions seems to get more aggressive, introducing little tweaks and add-ons and “wouldn’t it be cool ifs…?” that ultimately weaken the original design.

For those that may not know, Alan Emrich was previously (in)famous as the lead designer of Master of Orion 3…

And keeping with the Victory Point video game link, Nemo’s designer Chris Taylor was a lead designer on Fallout (not to be confused with the Gas-Powered Games Chris Taylor, of Total Annihilation/Dungeon Siege fame). :)

Everdell was fun, but took us a solid 2.5 hrs to play. Hopefully with an experienced group that would be closer to 90 minutes. Only mechanic that stunk was one player who was out of it pretty quickly and had no way to come back. Most of that was from new player mistakes, but I could see the same happening to a player with runs of cards that don’t work together.

Took so long that we didn’t get Quacks out, and instead of King of Tokyo we just played straight in Yahtzee which is my favorite go to.

But it’s a solo game, correct? Why is it so hard to make and awesome multiplayer zombie game that’s good? Last night on Earth was probably the best effort I’ve seen.

In theory 3rd edition has coop rules but they’re pretty much just “divvy up your actions between players”. So yeah, it’s a solo game.

Here’s my boy schooling me tonight in Transformers TCG. Late to the party, but I picked up a couple of starters and booster boxes on the cheap. Opened 8 tonight and played our second game, but first ‘full’ game with 25 stars worth of bots. Of course he opened a super rare Nemesis Prime, then mopped the floor with me.

It’s pretty fun, but I guess covid killed it in the end. The art on the cards is awesome, retro 80’s inspired and it seems pretty easy to get into and I kind of like the randomness that card draws add to attack and defense values - it made one play super memorable.

I played a combo to add attack value and additional card draws to an attack against Nemesis Prime, drawing six cards instread of the usual two. Against the odds, this ended up only adding a single attack value to my stack, which he then drew multiple defense cards against it, resulting in Nemesis Prime escaping with one health against my well executed plan, which had him screaming for joy.

I don’t care about winning, but that’s the kind of experience I want him to have to drive an interest in boardgames and all the beneficial education I think they can bring - maths, strategic and tactical thinking, planning and social interaction. 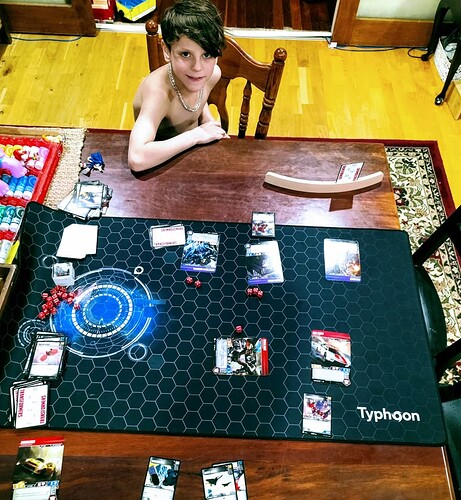 That’s pretty awesome. I can relate. I will miss those moments a lot once the kids are no longer kids and off to their own far away lives. Hopefully a memory or interest is set so that someday there will be visits with request to pull X or Y off the shelf once again.

I just need to vent

I don’t understand Kickstarter. And I mean that in the most literal sense possible. I have never backed anything, but every once in awhile I go to see what might be coming.

Today I stumbled upon the Game Toppers, but when I go to the KS page it is just an absolute mess of images and numbers and explanations and I honestly have no idea what is going on: 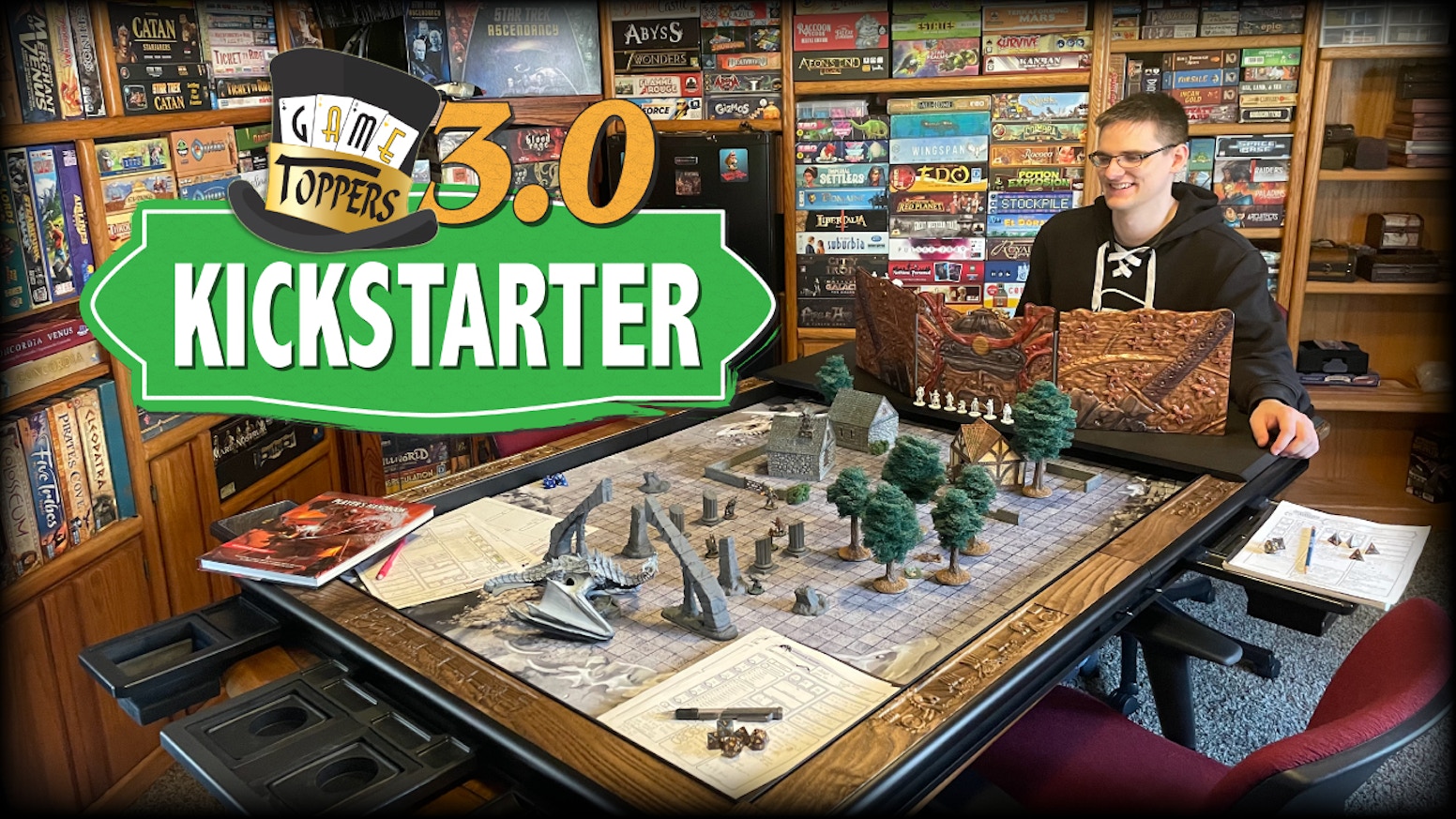 Why isn’t this just a proper store with a storefront? (don’t answer, I know why)

It isn’t just this product - I’m consistently confused when I go to KS pages to try and figure out what the product is, if it is even available to back, when it might ship and what will be included. Drives me crazy

It is, assuming your definition of “proper storefront” dates back to about 1995. 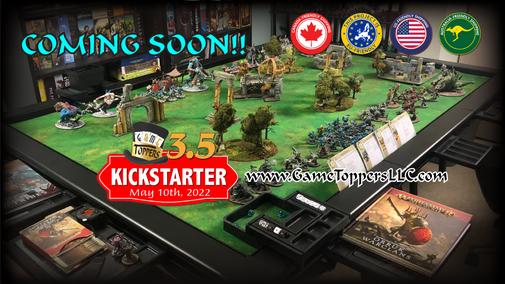 Game Toppers are a portable gaming top that converts your existing table into a high quality yet affordable gaming solution.

I mean, it’s a standard KS page. You glance at the pictures to get an idea of what’s on offer. Then you click on Rewards to check the prices and decide what to get.

I’m not totally sure as I’ve never run a KS, but I think the usage of pictures must make it easier to update the rewards (update the pictures on your CDN) as you unlock stretch goals, …

The only thing meant to act like a store front are the rewards though. And those kinds of work like they should.

As for whether it’s available to back, does it have days left on the campaign or a late pledge link near the top?

KS is still a pain when it comes to managing pledges and add ons on mobile though. They haven’t quite gotten the responsive design memo throughout.

Also, I think GameFound has a cleaner interface, but a fraction of the audience.

The only thing meant to act like a store front are the rewards though. And those kinds of work like they should.

They aren’t actually a storefront though. Never forget. The creator can abscond with your money and there’s nothing you can do about it. I have lost hundreds of dollars on just such a gaming tabletop. I personally recommend buying retail and not using Kickstarter for anything.

Oh, sure. I agree. I’m not here to tell people to treat KS as a pre-order store.

Mind you, since about 10-11 years ago, I must have backed well over 100 projects (some $10 participation to a documentary being made, some $150 on a TTRPG or board game, and many in between). Looking back, over 95% delivered. And some delivered rewards not available outside of the campaign. I haven’t personally lost hundreds of dollars. But that’s possibly luck as much as picking campaigns judiciously.

Where I lost money is on widely distributed products available cheaper after release (that’s the price you often pay for supporting a creator) or buying a dud. Some of the delivered projects disappointed in one way or another. Waiting for reviews where possible is much better. And yes some are among my favourite things (and not available commercially).

So there is a balance, but I’ve tended to back and feel FOMO less and less as time passes.

There’s some luck to it, certainly, but there’s also plenty of basis to judge projects by. I’ve backed more like 500 projects and I have been burned maybe a couple dozen times, nearly always for stuff I was only speculatively interested in and put minimal money down on. That said, it’s never risk free, and you should only put down money you can afford to potentially lose. But then, I’d say that about boardgames in general - they are not important enough to spend money you actually need on them!