It doesn’t feel like it’s been seven years since I wrote about it!

Wait a minute, @DT, are you Space Biff?

Just five minutes ago I was reading through this thread on BGG wherein the OP rails against video reviews and asks for more written reviews. Which prompts this reply:

Then I jumped over to this thread, click on your link to your Grizzled review, and I see you’re the aforementioned Space Biff!

Sorry to derail, but that was just a little bit of fun synchronicity for me. Now back to our regularly scheduled discussion of The Grizzled.

Wait a minute, @DT, are you Space Biff?

Guilty! I made my profile ages ago — “DT” is just my initials. I have no idea why I made it that way, nor any idea how to change it now. Half of the reason I began writing was because I was so enamored with Tom’s work. I’m trying to be more active in the places I lurk!

Half of the reason I began writing was because I was so enamored with Tom’s work.

Very nice! I just subscribed to your blog to get notified of news posts.

I decided to try Tovak for the second time. I watched some of Ricky Royal’s videos again. Then I lowered the city levels from the standard 5/8 to your suggestion of 4/7.

This time I won with my highest score so far of 190! I had a blast this go round. I hope to get in another game in the next few days. Thanks to all of you for your suggestions!

I played my first game of Lost Ruins of Arnak tonight (solo).

Above someone said it doesn’t really replace Clank!.. But I did get a very similar feeling in just atmosphere and design. Yes, Clank! Doesn’t have worker placement, but something just felt similar to me as I was playing.

It is a nice medium weight game, and I personally didn’t find it too fiddly. Did work the brain a bit as you tried to optimize main actions. The theme was fun as well!

The solo AI was great because it was dead simple to run. It did a decent job clogging up worker spots, and also kept items and artifacts moving through the supply. It definitely wasn’t challenging, but more of a roadblock. (I did play on 0 for my first game, so that is also a part of it).

My only complaint was that you don’t cycle the deck enough in only a 5 round game. I went with a ‘buy a ton of items’ strategy, and by round 4 any fear card penalties were meaningless because they were so diluted into my deck.

I may have also misplayed a rule on the solo AI, where I passed them for the round after their deck ran out. For the final round I probably ran 20 (maybe more) main actions to the AIs 10. I had so many items, including a variety of +1 card actions and currency swaps that I was able to both fly up the research track and buy high value items/artifacts to drive up my score at the end. I will need to double check some rules.

All that being said, I thought it was super fun and look forward to playing w the expansion.

I’m a bit frustrated with the direction Heavy Cardboard is going in. They toned down all the editorial stuff like the podcast and the Golden Elephant in favor of complete play throughs. At that point you might as well play the game. On top of that a lot the streams are now sponsored so there is no more room for opinions on the game.

At that point you might as well play the game.

“You might as well play the game” assumes you own the game (and have people to play it with consistently) or have access to it in some context where you could try it out. A lot of what they (and other playthrough videos) cover is either before release or shortly thereafter which means most people won’t have the game. And while you are free to differ, I find seeing the game in play much more informative than someone passing brief impressions through a filter of their wants and needs which frequently have little to do with mine.

But even beyond that utility, I enjoy watching people play games I like and it can feed some of that craving if I’ve been having trouble getting them to table, or perhaps have been having a boardgaming dry spell (I’ve only managed to get in two games in the last five weeks, and they were Wednesday and Thursday of the same week). Or for example, I’ll sometimes watch campaigns of games I’m moderately interested in but aren’t something I personally need in my collection (e.g. Asassin’s Creed, too many minis and too high a price tag, plus I missed the KS, but it’s been fun seeing other people tackle it. Though now they’re talking about a retail version that will have no minis (or maybe just player minis) and be under $100…so who knows.)

Just the perspective of someone who almost exclusively watches playthroughs, when it comes to boardgaming videos. (I do watch SU&SD reviews but mostly because they do jokes, not because I care about half the games they’re reviewing or agree with their feelings on half the stuff I am interested in, c.f. their burncycle, Etherfields and Sentinels of the Multiverse reviews.)

Interesting perspective. For me watching people play a game doesn’t always relate the experience of playing that game. Even if it does - it is doing so in a very inefficient way. I prefer a format that does more reflection and also presents itself in a more condensed way.

It’s certainly not quite the same experience (which is another reason why “you might as well just play the game” doesn’t really hold), but you get to see the rules in motion and the flow of the game, and reviews just don’t do that. If there were a reviewer that I felt consistently shared my tastes I’d maybe find that helpful but as it is condensed usually means “could easily have left out or glossed over something that would hugely matter to my experience” and the actual opinion is only interesting to me if I actually know the reviewer, personally, in the same way that I’m interested to know what my friends think of anything I’m either considering or have already experienced and want to talk about with them.

So my friend and I tried In Too Deep today, 2 player, on Tabletop Sim and found it both thematically and mechanically lacking. Not terrible, but not a game either of us will be buying or playing.

Mechanically, it relies on far too much hidden information and memorization for my tastes and lacks ways for the player to tweak the probabilities. For example, drawing the right mission cards is huge but there are no options for cycling or enhanced draw, or searching/scouting that I could see. If you don’t like your card you can discard it at the end of the turn and draw a new one, but that’s it, and that essentially “costs a turn” b/c cranking out missions is key.

Thematically, I just didn’t feel any connection between the game mechanics and the theme - they had a cybernetic “hooking” mechanic that just didn’t yield any connection with the characters or plot, and the evidence gathering/filing stuff just felt abstract. Also, the stuff about going “in too deep” and balancing corruption felt vastly overhyped.

Eh, that sounds a bit harsher than intended. It wasn’t terrible but it was disappointing. I had high hopes going in.

Marvel Dice Throne will be here this week, pretty excited

Dissenting opinion: my wife and I find In Too Deep very good in person.

The components are nice, which helps with the setting and immersion. I’m sure it also helps when you don’t have to deal with the clunkiness of a VTT and have for all the components and markers on the table.

The game is short and light enough that we didn’t have an issue with the luck aspect. It’s there, but not overbearing. After all, you have varied criminals with different powers to complete your story missions and side crimes. Using their ability once you are hooked on deep enough is crucial. You can also draw more side crimes to help you get more rewards and complete more missions through boost tiles.

For us, the joy is in creating those combos with the criminals letting us complete more than one objective a turn.

And having played several games, the aspect of going in to deep and what it means for your play style is definitely a strategic consideration.

It’s a pick up and deliver puzzle game. We feel it does the genre justice. But I can understand it’s not for everyone. Different tastes and all that, obviously.

I don’t mind a good play through when I can see what is being done. That said HC used to be my go to, but lately…
Same with Rahdo. I’ll chalk a lot of it to diverging game tastes, I need to find a new reviewer I like.

I also like In Too Deep. It’s quick pick up deliver game which never happens and I like the apsect of do I play it straight or go full corrupt. 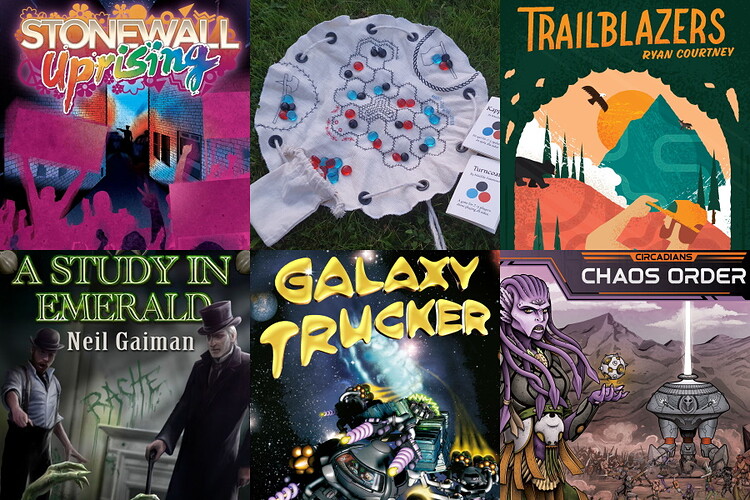 Not an especially busy week.

After having mixed feelings about Pipeline (and negative feelings about Curious Cargo), Trailblazers has become my favorite Ryan Courtney game. Mostly because it focuses on the pipe-building instead of all the unnecessary clutter that marked the previous two games. There are a few extra considerations, but they’re folded into the routes and loops more fluidly than before. Or maybe I just enjoy putting together puzzles.

Turncoats is the handmade game in the top middle. Its designer was inspired by Pax Pamir, and it shows in the design, although it goes in some interesting directions on its own. Very tight decision spaces; everybody begins with eight pieces, and wants to end the game with 2-4 of them; at the same time, every action requires you to spend a piece. So there isn’t any room for wasted moves. I’m smitten.

The main thing I’ve learned from Chaos Order, since I haven’t had a chance to actually play it yet, is that assembling tuckboxes is fun. More games should come with tuckboxes.

I can already tell that I should devote serious time to figuring out how to teach it before I bring it to game night. Seems like a pretty hefty meal even before you get to the faction-specific rules.

Galaxy Trucker and Study in Emerald 1e are among my favorite games. I should try to get my friend Tyler to bring the latter out to game night tomorrow

The main thing I’ve learned from Chaos Order , since I haven’t had a chance to actually play it yet, is that assembling tuckboxes is fun. More games should come with tuckboxes.

Yes! I loved putting together those tuckboxes. And I’m notoriously all thumbs for that sort of thing. I love how precisely everything fits in them. More tuckboxes, fewer baggies.