When a boardgame review becomes a deep dive into the history and development of a game genre.

Yeah, I think he’s real good at that. He did this as well for Sleeping Gods – his praise comes in a larger historical context of ‘narrative choice’ games. 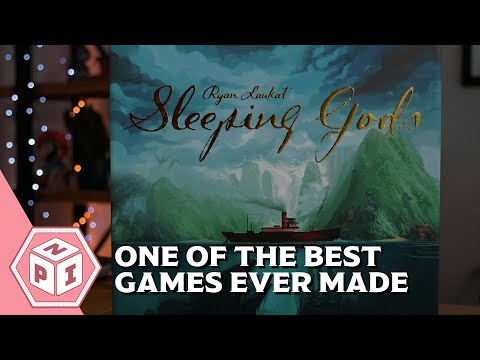 How do folk manage the ‘tableau’ when playing Marvel United? I find the played action card chain becomes quite the sprawl as you play so I need to periodically clean them up into a discard pile, leaving only the last 3 or 4 visible to enable ongoing gameplay.

Is Marvel United any good?? I got sucked into a Kickstarter hole and ended up with absolutely every expansion and every exclusive figure (that took a lot of explaining when the box showed up!), but I’ve never actually cracked open the damn game.

I think it Marvel United is a good game and especially good with younger players. I think if you play it a lot it may start feeling a bit samesy since a lot of the regular character cards can give that feeling. If I recall correctly each hero has three specific cards (out of 15) that give them their individual hero flavor. The game shine more the more heroes you own. The fun comes from trying different combinations.

Just played my first games of Marvel United, played three games, loving it so far. Really bummed/irritated/slightly angry at the whole concept of just how much stuff there is that is kickstarter exclusive though. I understand trying to give people a reason to back it, but I see no fair or good explanation for locking actual gameplay stuff behind a one and done promotion. I like how Wise Wizard Games handles their kickstarter and goals, you get extra stuff and/or alternate artwork but anything ‘exclusive’ to kickstarter can be had eventually down the road, just might not be right away.

Also got my first game of Marvel Dice Throne and so far loving it as well. Already huge DT fans here though, but we played Miles Morales vs Loki and it felt pretty good. I’m always amazed at how they can fit the theme of a character into game mechanics so well.

I would LOVE to have both All-In’s on Marvel United, but sadly our household just went unemployed unexpectedly and the prices for kickstarter bundles ain’t cheap after the fact.

My heretical opinion of Marvel United is that it’s Babby’s First Arkham Horror, and I really enjoy it.

How do folk manage the ‘tableau’ when playing Marvel United? I find the played action card chain becomes quite the sprawl as you play so I need to periodically clean them up into a discard pile, leaving only the last 3 or 4 visible to enable ongoing gameplay.

Is Marvel United any good?? I got sucked into a Kickstarter hole and ended up with absolutely every expansion and every exclusive figure (that took a lot of explaining when the box showed up!), but I’ve never actually cracked open the damn game.

TLDR: MU has been one my best gaming pick ups in a long time due to theme and flexible play group appeal.

I find Marvel United to be amazing. It fits well in that slot that has more going on than a party game, while also has the theme and pacing to hold the interest of non-gamers. It is a solid, highly modular cooperative resource puzzle in 30 minutes or less.

I see the “it’s for kids” thing thrown around a lot. I felt it before I really knew the game. In fact, that is why I skipped the first KS—and then deeply regretted it after trying the game. It cost me a bundle to chase it down later. I went all in for the MU X-Men though.

MU is very good, MU X-Men is better as they expanded in their design space (more unique cards per hero, starting hand cards, bottom deck cards, more interaction with timeline (cards already played), etc. Not that MU is obsolete. It all mixes so very well.

Yea the amount that is KS only is a crime. Especially when the game thrives only if you have enough to swap heroes, villains, and modes around a bit. I do think there is or will be enough at retail between MU and MU X-men to be way more than serviceable. I would not suggest just a core box. You need a critical mass of options for it all to feel great.

As to the timeline, I use the circular Neoprene mat from the KS. The cards just go in a circle. It does eat space but it’s nice to look at the full timeline as a thematic story presentation of turn and it also has game value as plenty of cards interact with the timeline. Also I tend to have 3 to 4 people at the table so the large circular layout works to equalize position.

Thanks! That was very helpful and very thorough! And yeah, I’ve been a sucker for expansions since Cosmic Encounter, so I love games where you can swap out heroes and villains and scenarios and add all-new combinations. (But man, they take up a lot of room! Maybe I should sell them on eBay??)

And yes, I also have the neoprene mat. :(

I like the game enuff to have pimped it out from items on Etsy:

I bought this tray because my bridge table has a soft top and this helps keep things in place: 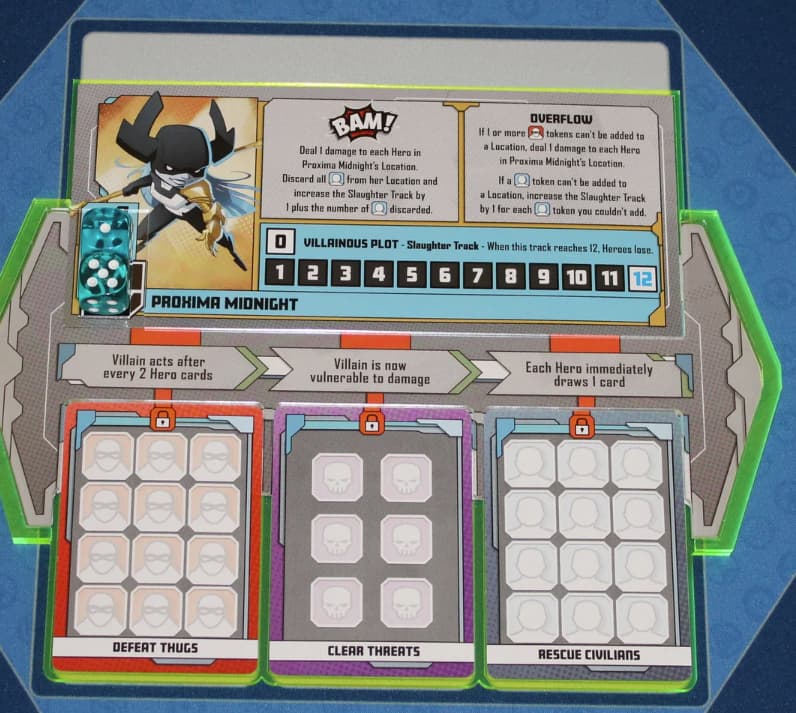 Yeah, Marvel United is a light coop with some actual depth and a liiiil’ bit of actual theme and smart enough that I actually enjoy it. I just, you know, don’t enjoy it enough to pay hundreds of dollars and have like an entire bookshelf worth of boxes of it, nor would it stay fresh if I only bought in a little bit. So I’ve not bought it myself.

I also got some tokens like that from Etsy. They are pretty cool. I don’t have the dashboard thing though. The plastic token set from the X-Men KS is also pretty snazzy. I like the stacking poker chip like health tokens from that especially.

On the space complaint side, yeah. All of KS has been like that lately. I recently got Massive Darkness 2 too; it is also a huge joy as a modular Diablo crawl. It is also just huge. And that’s the thing. So many KS games are super expensive and come in a stack of boxes nowadays. At this point my greatest issue with board gaming is the storage footprint in my house. My personal office is full of KS boxes that frankly give me more anxiety than enjoyment. I need to get better with passing along the games that I don’t enjoy as much.

That said, I successfully reduced MU and MU X-men to a few boxes plus the card boxes. It’s big, but not the wall of boxes big that it was originally. It would be even less if I just tossed the minis together and/or didn’t sleeve all the cards.

I like the game enuff to have pimped it out from items on Etsy:

Just to go one further, I like the game enough to have opened an Etsy shop to help others pimp it out. The only problem is that the shop has been keeping me so busy I haven’t had time to actually paint or play the game in several months.

The game has been a big hit with the adults I’ve played with. I’m hoping my nephews – who were raised by wolves – will grow out of their perpetually-sticky card-folding phase soon so I can introduce the game to them.

For Marvel Champions Solo play I bought these: 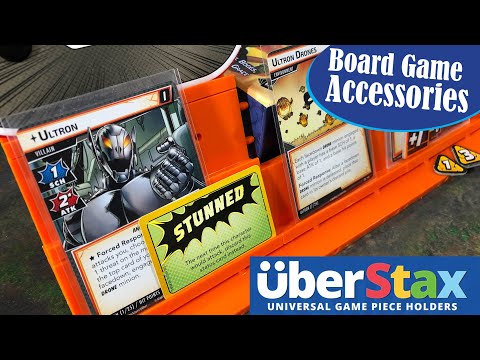 I am on vacation next week and plan to try out some solo board gaming. I think having the cards stand up will help me play easier. My eyesight seems to be getting a bit worse these days so anything that can help me is a blessing.

Been playing Welcome to the Moon, a flip and write game. There are 8 maps with all different rules and a solo mode with 8 difficulty levels, and a campaign game. Played the 1st map, the most basic and sort of a tutorial, lost against level 5 first game but beat level 4, barely, 2nd game.

Been more and more into write games lately and this one plays fast but has some decent brain burning. Hopefully more the higher numbered maps but even map 1 has been fun. 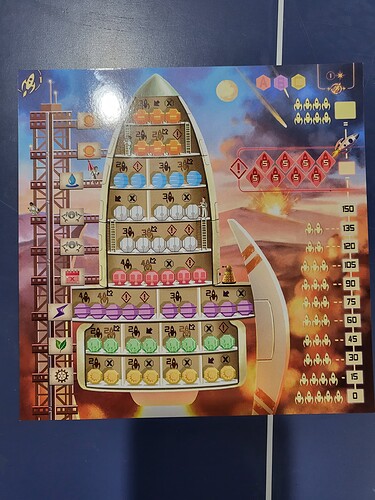 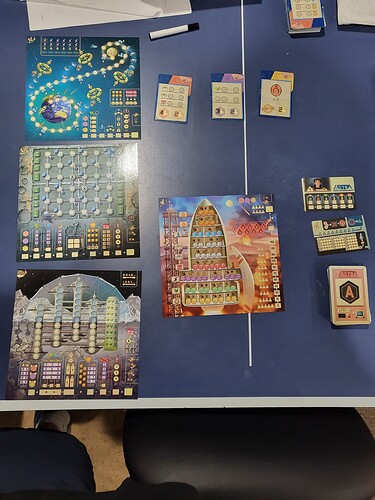 Do you sell stuff for other games?

No, it’s all Marvel United so far. I can’t keep up with demand, which caught me by surprise because most orders are going overseas from Australia. The hunger for upgrades is strong when you suddenly find yourself with 19 boxes of content for a single game.

Would you mind linking to your Etsy shop? Even though you’re all booked, I’d love to see what sort of stuff you’re creating.

It’s Minis From Mars. It looks barren at the moment because Etsy hides anything that’s sold out – not helpful! You can still get to those listings if you click through the reviews though. 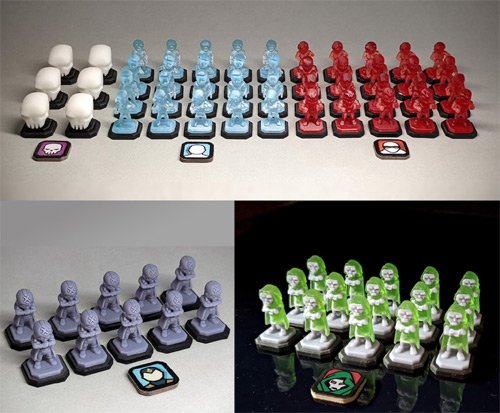 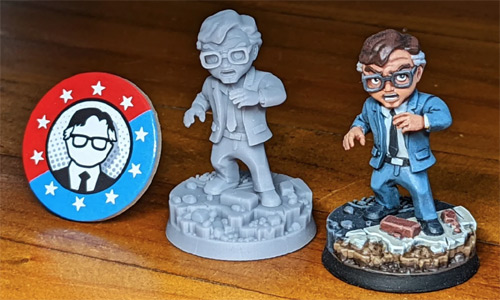 Those look great! I’ve started to upgrade a few games on Etsy (Quacks of Quendlinburg, Gloomhaven player stations). They can get pricey, but it is worth it if you love the game.

Really like those thugs, civs and threats. what are the dooms and mm’s from? I only have base set, base x-men and spider-man since no kickstarter.

Whoa, that’s awesome! And just to clarify for anyone who doesn’t know what they’re looking at, the game provides the token on the left for a character named Senator Kelly. You created that sculpt, printed it yourself, and then painted it. Amazing work, especially for how it fits in with the look of the rest of the game!

And you’ve done the same for other items in the game that would normally be represented by tokens. That’s impressive. I’m really glad I don’t know this game, because if I liked it, you would have ruined those tokens for me! :)