It’s an interesting thread, in that for all the designers’ desire to let the player choose how they want to resolve issues and play the game however they like, from the tone of the reponses they themselves seem to have a preferred methodology with which to resolve ties, which presumably is how the game was balanced. So why not just write the rules to reflect?

Scenario 1: You are a space away from the exit with move cards in hand. The killer phase brings a Terror card with Hans targeting a victim and moving to kill. You very much want to save one more victim and unlock your ultimate ability, so Hans moving into the Exit space is by far the worst possibility for you. Not only are we easily able to make the decision of what is most evil, but it is also very thematic. And yeah, sucks to be you, but this is Final Girl, not Wimpy Killer. If you want him to move to the left victim and are only interested in a mechanical experience where you can win as much as possible and don’t care about a good story whatsoever, then use the new “Rule of Befuddled Buffoonery” and enjoy your D-List Horror Movie experience.

Scenario 2: Same exact setup. You set up to search the Docks on your next turn, problem is, you have no move cards. It is mid-game and Hans is doing a fair bit of damage each turn. You know that if he moves to your space and kills the victim this turn, you could possibly be facing two (or more) attacks the next turn since you’ll only pick up the move cards after your action phase. In this situation, it is far worse for you, and again more thematic and a better story, for Hans to move into the docks and kill the victim there and really put the pressure on you.
But hey, you could again go with the Rule of Befuddled Buffoonery or roll a die to determine randomly which way he goes (neither of the other two which make that much sense in this scenario). And all jokes aside, if that is more fun for you and you don’t want to have to think about these things, then make the quick choice or random roll and go with it. The game is stout, it will hold up to head scratcher moves like that, even if the experience will suffer a bit in my opinion, it still works.

I’ve no skin in the game, since I don’t own FG, but from the praise here I am most likely going to back season 2. The rules as written aren’t particularly going to bother me, but I can see how it would bother Tom and others.

I’ve read through it as well to determine if I should get Final Girl. I don’t normally play solo but was curious. I agree with Tom that “rules” which state you can follow your heart are terrible. I want to know how the designers intended for things to be played and play it THAT way. However, he insulted them a lil bit. I feel like this got things off on a very bad foot and if I had spent x amount of time on designing a game, these comments would lead me to respond with anger. The question and criticism was warranted but the message even made me (a Tom fanboi) wince.

“The designers and developers couldn’t even tell us how to resolve ties? They instead included three broad guidelines with cutesy names and dump the issue in our laps? Oof.”

“Personally, I’ve opted for a fifth way of doing it, which isn’t supported in Final Girl’s rules: I just roll a die and break ties randomly. I call it The Rule of Loosey-Goosey Boardgames That Can’t Be Arsed To Provide A Tie Breaker. : )” 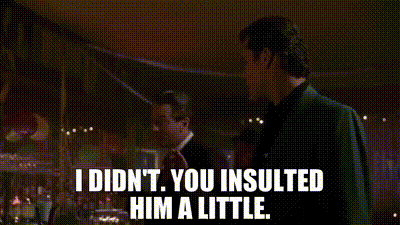 Also, are there plans to do more board QT3 board game podcasts? I miss you guys.

Personally, I’ve opted for a fifth way of doing it, which isn’t supported in Final Girl’s rules: I just roll a die and break ties randomly.

I think a little spinner with a knife as the arrow would be thematic!

if I had spent x amount of time on designing a game, these comments would lead me to respond with anger.

But, at least ostensibly, you’re engaged in a for-profit endeavor in this case. You’re not doing charity work, and this isn’t a free hobby like knitting scarves that you’re giving away, where folks will find drops in the weave to be charming.

Instead, this is a game that you’re accepting folks’ hard-earned cash for. And so you’d better have thicker skin than that – and also be at least somewhat open to consider that maybe the way you mapped things out isn’t super great, rules-wise.

Played In Too Deep with my son. We had a good time. It’s basically a pick up deliver game with a cyberpunk vibe. You go around hacking into criminals to complete missions and gaining evidence which is used as multipliers for end game scoring. As you use a criminal more and more you gain access to their special ability and eventually the ability to gain more actions. The more you use criminals (and depending on how you decide to complete missions) you take corruption which can potentially cost you a lot of points in the end game.

In Too Deep has been delivered and I really like the look of it!

With the week-end approaching, I’ve set up the game for a 2 handed solo play to learn the rules. 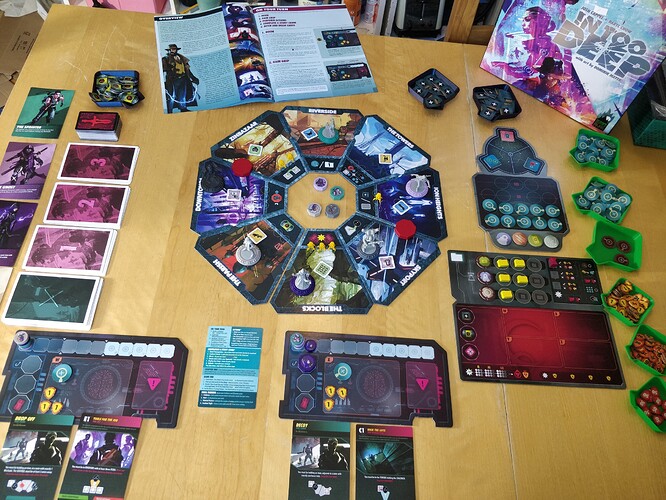 @Shieldwolf did a good job of summing up the gameplay. You hack into the mind Syndicate criminals who move about the city. 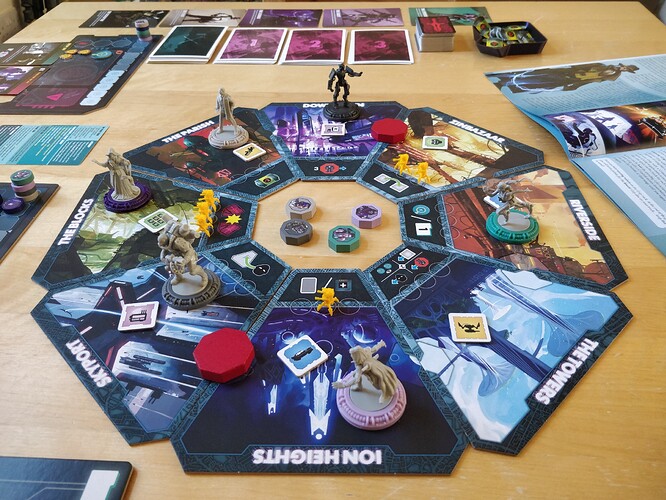 You observe / influence them as they commit their petty (side crimes) or not so petty (story crimes) misdeeds. All the while, you gather evidence (the score multiplier / co-op chapter progress currency), intel (VPs) and corruption. Gain too much corruption (go “in too deep”) and you will likely want the overarching plot not to be foiled. Otherwise, your corruption will cost you points at the end. 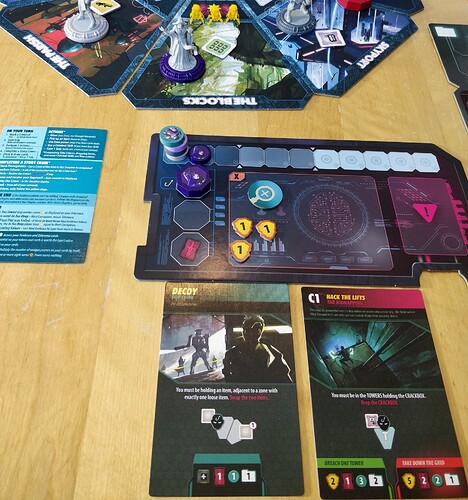 When you complete a story mission (the ones with a red top and 2 outcomes), you get to pick a cautious approach, netting you more evidence, or go for more corruption and more VPs.

As you gain more grip with the criminals and move their token on your player board, you unlock their special abilities and, later, more moves per turn.

Each game only has a selection of the criminals in play, a subset of the stories and a randomised city layout. 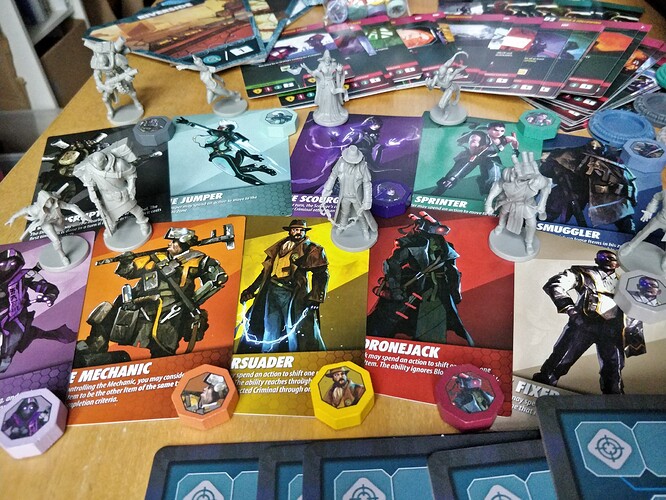 I can’t yet say how it plays. But it looks awesome on the table. And the gameplay sounds appealing to me. I’m looking forward to giving it a proper go this weekend!

What are the trays you’re using? They look really nice.

The black ones with a pour sprout at the end.

What are the trays you’re using? They look really nice.

All 3D printed by friends. The different colours come from using different filament. And one of the reasons my wife is now nagging me to get our own 3D printer.

They also printed me this awesome dice tower for my birthday. 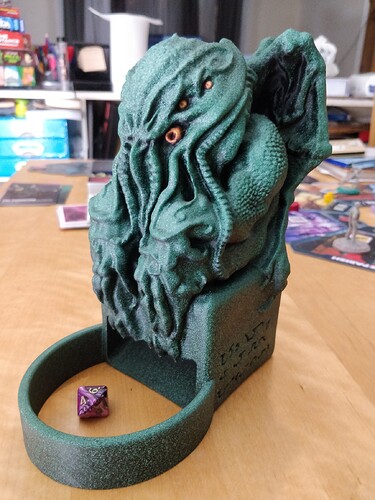 Quoting myself here, because I’m sad. After mentioning Divine Right, I looked it up on BGG today. It turns out some folks, in collaboration with the original designer had been working on a new version for a while (the last decade or so). The rights with their publisher expired, and so the original designer sold them to… Vox Day, the noted neo nazi ‘author’ . So, the members of the team withdrew all their volunteer contributions, understandably not wanting to associate with that sort of filth. Dammit. Fucking nazis ruin everything.

Hope you like it. I’m looking forward to trying it again. The last game was very close and we played very different strategies. Can’t wait to try this with 3 or 4 people.

All 3D printed by friends. The different colours come from using different filament. And one of the reasons my wife is now nagging me to get our own 3D printer.

They also printed me this awesome dice tower for my birthday.

That’s awesome. I don’t use a dice tower I would love something like that.

That’s awesome. I don’t use a dice tower I would love something like that.

Same. I normally only use a dice tray to avoid dice rolling off the table. But Cthulhu is too good not to use. You can even blame bad rolls on its evil influence.

I just backed Final Girl for four feature film sets (two each from seasons 1 and 2) along with a play mat. I really wish I could start out playing the game with the summer camp killer and location… for now I’ve got the poltergeist and carnival sets to play with. 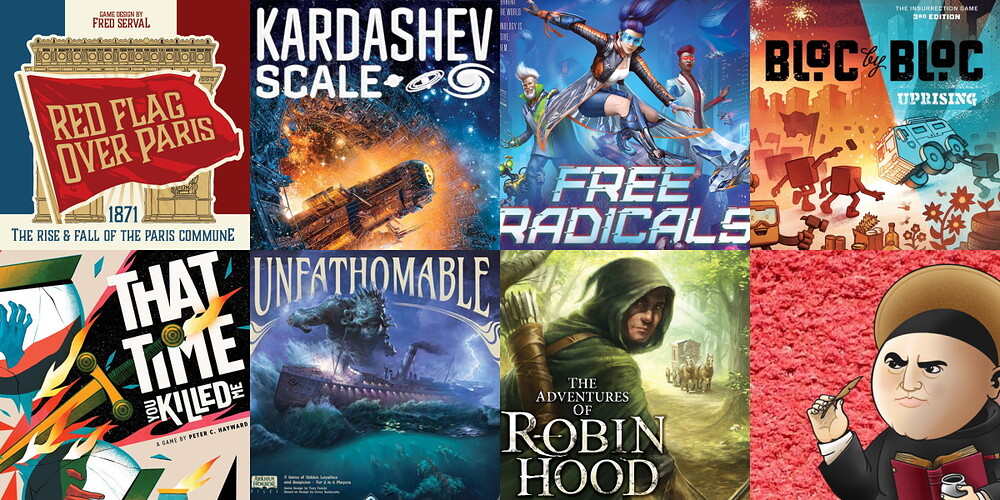 Lots of HMMMM moments this week.

Kardashev Scale is rochambeau with illustrations and a tiebreaker, which is a weird thing to say of an action that usually functions as a tiebreaker itself. Free Radicals has lots of asymmetry — ten separate factions’ worth! — but none of its minigames are worth the downtime. Unfathomable shows how far social deduction has come by not stretching past Battlestar Galactica, while also missing out on that game’s 9/11 paranoia.

The other plays were good, though.

Well, I whipped out my 7th Continent this weekend, took another run at Voracious Goddess, and failed miserably.

I was too frustrated to take another run at it, but rather than pack it up I decided to try another curse, The Veins of the Earth. I was enjoying it for a while, when it seemed kind of on-rails so I couldn’t really make a mistake and go the wrong way; eventually I’d die or get to the end.

But… then… I didn’t die or get to the end. I got released into the wider world with no clue what I was supposed to be doing, or how to make progress or complete the curse. I guess I missed something along the way.

I’m starting to wonder how much it is cheating to just take pictures of all the cards you see. There’s some cards (spot-the-differences-puzzle, I’m looking at you), where if you just took a picture of the results card you’d always succeed. But I play once every few months or so, I’m never going to remember what the answer was.

At this point, I’ve tried a few different curses, and other than the super-introductory gather-the-crystals one, I’ve never come very close to finishing any of them. I’m not sure what I’m missing. Are you just supposed to memorize the continent? I don’t play often enough for that to ever happen. Am I making some kind of rules mistake? I don’t think so. Do people just cheat all the time?

Are you just supposed to memorize the continent?

Yep, more or less. Keeping notes or even just photos is pretty much mandatory if you’re going to make much progress.

-Tom, who never made much progress

Tis the season for kickstarters to show up apparently! 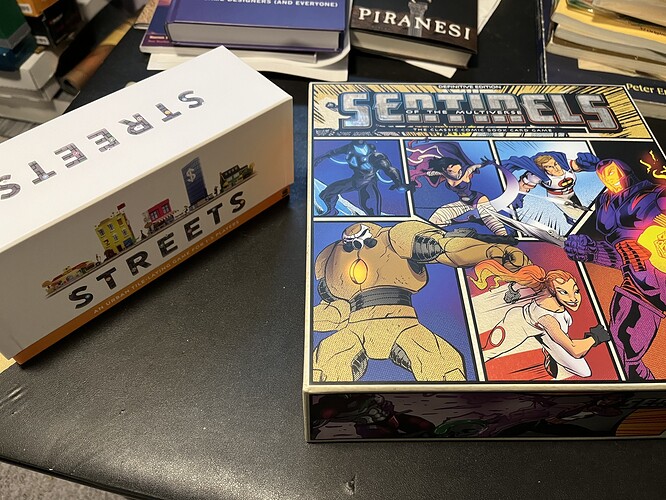 I feel like a bit of a rube for buying into the Sentinels reboot. But I was just super-curious what they would redo when they had the chance, and I could see it being a game where they had a lot of lessons learned they could apply. We’ll see if it seems any different when I get it to the table!

Oh, that’s, um, me. When I post my little played-last-week list to social media, I sometimes include that. Branding, I think.

Ahaha, okay, that makes a lot of sense actually.