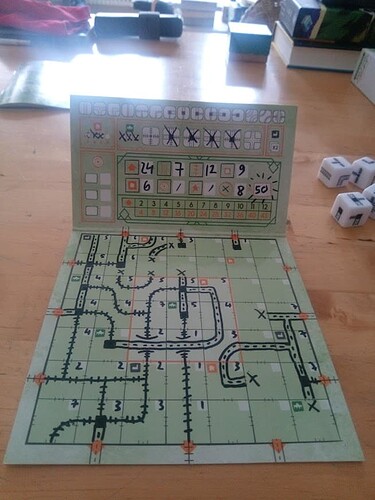 50 points in Railroad Ink. My best try so far. What I love about it, how the dice decide what you are going to draw. Like creating a little artwork by a game mechanic, like the Écriture automatique by the french modernist writers…

I also play Sprawlopolis, but could not win so far…

Just got Pitch car for $3 at a garage sale. Woooot

I got the app and there may or may not be differences between it and the paper game, but the best worldwide daily scores were over 90, and I can’t see how.

it depends if you play with expansion dice. I think then you can score higher. I have only played so far the Railroad Ink challenge base. I could try the Forrest expansion or Trails. It was in the box…

So nobody told me that Fantasy Realms is not the fantasy version of Star Realms? When it came out here in Germany as Fantastische Reiche (because more letters are always better), I thought it was reskinned Star Realms. I did not enjoy Star Realms, it is OK (I tried the app). Hero Realms (not enough letters for my taste) is the fantasy version.

However, Fantasy Realms is something totally different. A game where you optimize your hands until 10 cards are in the discard display… and it looks like a game I totally can get behind, something like the unicorn is only worth 30 points if you also have the princess. A game that I can play with my daughter… We used to play Fairy Tale a lot, a drafting game that works for 2 players and we had a good time together.

Jamie Stegmaier likes it so much he used it as the base gameplay for his Red Rising game. It adds locations, points tracks and Red Rising theming to that concept. My wife and I enjoy that one a lot. Though it’s partly because we have enjoyed the books. Fantasy Realms is more portable and easier to teach.

We meet every Monday for boardgaming and I thought I would post some impressions. I lurk too much, need to post a bit more!
As there are quite a few members I normally get to play a new game every week.

This week we started with Ankh, by Eric Lang. Not a massive fan of his games but if you like big miniatures and area control battles then his games are for you! You play an Egyptian God and wander about building and capturing temples, obelisks etc and fighting the other Gods. The most interesting (and controversial) mechanic is that after a certain amount of time the bottom two players (we played 5) merge into a SUPERGOD and gain each other’s powers and tech. This proved too much for myself and the other player (the third player was eliminated for not having enough points by a certain threshold( player elimination, how quaint!) and AmunAnubis claimed the win.

Next up was Bonfire, by Stephen Feld. I am a fan of Castles of Burgundy and think I own Aquasphere somewhere so was interested to try this one. Much heavier than CofB it is one of those games where you start thinking “I have no clue” and end with a good understanding of the game. His games are of the “point salad” variety where you must do a little of everything.

This one involves creating bonfires with your gnomes by travelling around islands in your boat and picking up unlit bonfires which you can then light by doing a task. Can’t really explain it honestly it is extremely weird but was fun. We played four but the owner killed us and I was mainly trying to avoid letting him lap me on the scoreboard!

Finished the evening with a game of Japanese Poker whose components are simply the cards 1 through 15. Provide a few coins and you have a surprisingly fun “filler” game to wind down with. 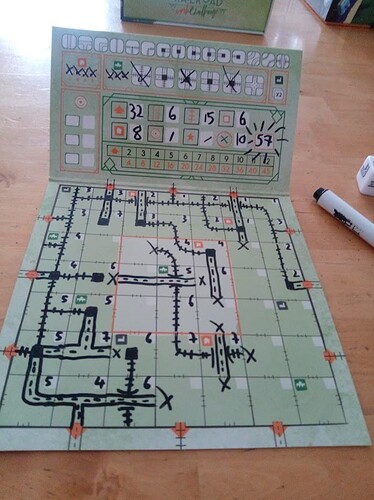 I don’t know what the maximum is in Railroad Ink, but I had 9 connected exits for 32 points. However I had 10 open ended routes. I don’t know yet if I can manage to close the routes and still get my exits.

I notice that I did not use my 4th special crossing (due to university), could have squeezed some more points.

I went to another Flesh and Blood Armory Kit tonight (holy fuck, Legend Story Studios are Kiwis, why are they spelling Armoury wrong!!), had a good night. I went last week, but was late, so just watched and learned. The website said it would be the smaller deck blitz format, but it was wrong and it was the normal 60 card constructed format, so the deck I brought was no good. Thankfully the nice fellas I played in my rounds carved their decks down to blitz size and we played anyway.

Got beaten by Bravo, Star of the Show in a not too bad and close-ish match. Actually, technically I won it by concession, but it was a bit cheeky. I was 1 life to 6 left when the clock ran out on our match. I obviously should have lost, but that would have ended the night for everyone based on my opponent picking up a win and closing out the night, so he instead graciously conceeded defeat so we all got to play another round.

Then I was arrow combo’d to death by an Frostbiting Lexi, who was again very kind enough to talk me through his turns to familiarise me with his cards, while doing so.

Small turn out, but a nice bunch of people and super generous to a new player, veritably showering me with excess cards to help fill out my pool.

Picked up a booster for the entry fee, three promo cards and one of the guys that won a playmat in turn gifted it to me, so not a bad night!

Interesting game, there is a lot more going on mechanically than first appears when reading the rules. I can see why it’s been growing in popularity, particularly with such a seemingly welcoming community. I like the idea that two heroes are wailing away at each other, but start at full power and their equimpent cards are slowly whittled away as the fight progresses. Knowing when and how to take hits and when to try to take and hold tempo creates a very risk/reward type decision space. 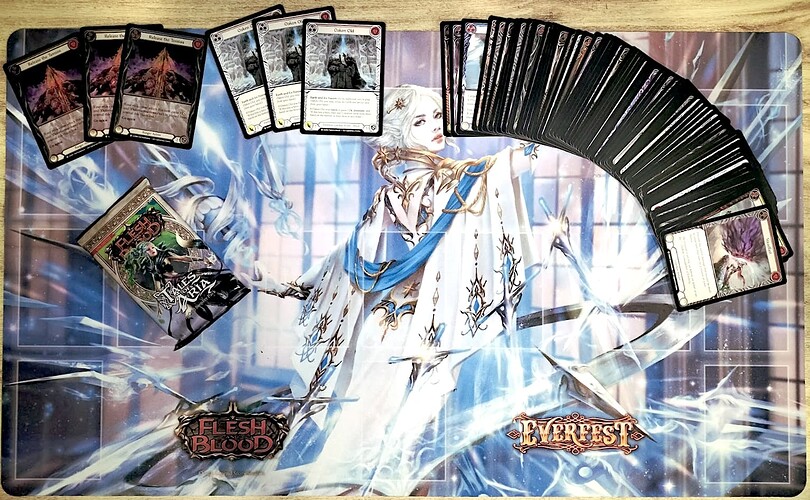 So, I cleaned out my board game collection a few months back, and have been looking at the empty shelf space.

I’ve had a week of weakness and spent way too much money:

I’m working to build up a diverse selection of game types, and I feel good about what these add… But that should just about do it for my game budget for awhile.

I’ve seen several posts about Railroad Ink. It looks interesting, but there are so many different versions. Blue, green, red, fuchsia, burnt umber. Which would you recommend for a rookie engineer?

Get the digital version. Each of the colors adds a new couple of features.

if you want to roll dice physically, then any of the 4 bigger boxes will do. I strongly suggest the green or orange one, called “Railroad Ink Challenge”, they have goal cards additonally to a slightly enhanced board. I love the factories, university and settlments. They give you bonus if you connect them. 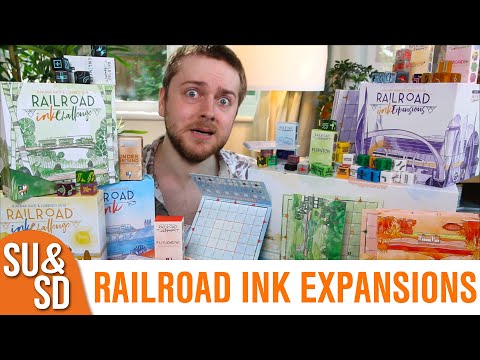 Playing digital myself. Not a bad little game.

Any thoughts on the new Butterfield Enemy Action game from Compass?

Fulfilling in August, apparently. I’ve not played the first game.

Bought a copy of The King Is Dead (2nd ed.) because I was exposed to the gamebox in every screenshot of the SOL forum game, that @Dave_Perkins posted. I watched some videos before, and liked what I see.

But now (before playing), this game should be named “Tiebreaker - The game”. Because all the games that I watched ended in a tie breaker… So, when I will bring this to the table, I will make sure that everbody understands the tiebreaker, and that they will likely decide the game.

It is a little bit like in Dune Imperium, where you should make sure to have some excess spice for tie break. Probably an issue of games where there are less than a dozen points to be made. Ties are more likely. 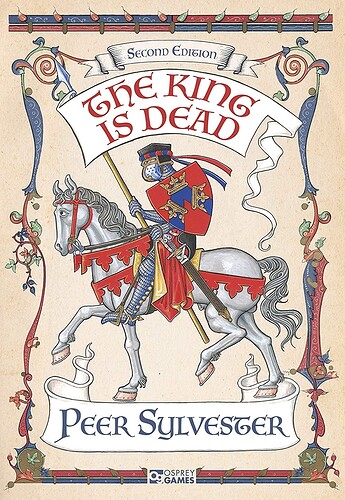 But do you like it? I have it on my wishlist

I don’t know, I bought it because I like what I saw. It is actually the third tiebreaker that is hard to grok because there are 2 different endgame triggers with different tiebreakers.

I think to win a game, you need a clear goal. A second or third tiebreaker rule is not a clear goal. I hope it does not happen too often (the third one)

The King Is Dead is such a fascinating little game in part because of its reliance on tiebreakers! It might be one of those game designer’s games, though. Its ambiguous victory space inspired Cole Wehrle to design Pax Pamir. Basically, it jumpstarted his entire design career. 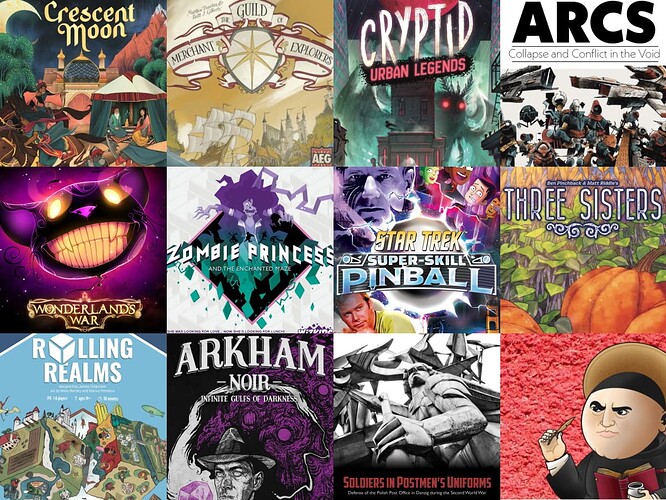 Had a good week over here. Got in a final play of Crescent Moon for review. Speaking of Cole, this tinkers in some of the same design space as Root: deep asymmetry, both shared and differentiated victory conditions, power dynamics. It isn’t quite as durable as Root, but it has a few advantages that make it worth checking out.

Other than that, it felt like a roll/draw-and-write/place week. The Guild of Merchant Explorers is a draw-and-write in all but writing, and it makes good use of that headspace. Star Trek: Super-Skill Pinball has yet to win me over, partially because we only played the first two tables, which meant enduring the obligatory intro table. Then again, there was some real charm on display, especially with the Tribbles table, which asks you to shoot for a sweet spot of tribbles without amassing too many of the things. Three Sisters represents what I suspect will be the problem with “next-gen” roll-and-writes: it’s too complicated, but since you’re playing with a pad and pencil, there’s no way to track what the hell is going on. Despite my wariness toward Stonemaier games, Rolling Realms was rather charming with its shifting minigames. I’d even go as far as to say that I’d like to see non-Stonemaier titles get their own boards.