Played two rounds of Lift Off yesterday, with two players. This is a game where each players tries to have the most successful space agency, with lots of planning ahead necessary. Although the rules made the game seem quite complicated, it plays really fast and snappy. Luck of the draw is mitigated by drafting, which applies even to the secret goal cards, which I enjoyed a lot. There are not many ways in which you can hinder your opponent, but that allows for the aforementioned planning ahead. We had a fun time hosing ourselves repeatedly with rockets too expensive to send into space or missing essential technology, and the shorter playtime in comparison to our usual staples Terraforming Mars and Twilight Struggle is a bonus too. Now to get it to the table with four players… 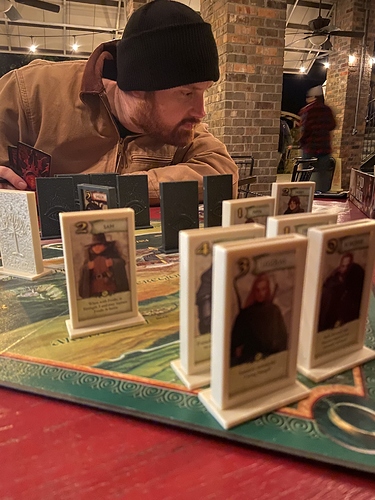 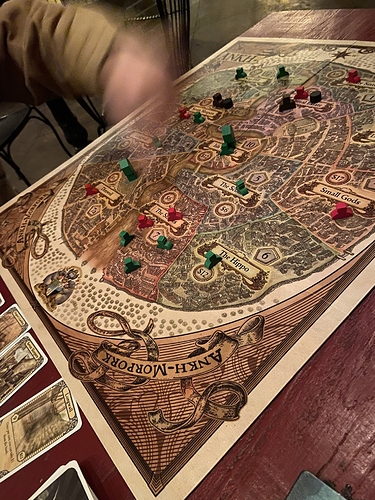 I have a deluxe copy picked up years ago via eBay. Could be my go-to favourite so-easy-to-teach but dang, so wonderfully tricky and chess-like once you get a game or two in. I have played maybe 6-10 times and am still yet to use any of the rule variations and alternative characters such is the entertainment from the base game.

Has anyone tried Yggdrasil Chronicles yet? I’m a bit on the fence about it. The tree looks beautiful of course but I still don’t find a lot about the game itself. Even Dice Tower only an an Unboxing video and a video about assembling the tree.

Also if you are into easy to teach 2 player Knizia games you should also check Battle Line Medieval, the new version they just released finally has good artwork and a neat expansion that mixes up the terrains and makes them more interesting. I really dislike the huge box they ship it in but at least you can get rid of that easily enough. Air Land and Sea is another great card game in the vein of Red 7.

For anyone who thought Glorantha: The Gods War sounded cool but missed the original Kickstarter, Petersen Games has announced the followup Kickstarter for January 20th (there’s a cosmetic first player mini if you back day one, not that that especially matters). This brings three main things as far as I can tell from the preview: 1) a reprint of the core game and Empires expansion, 2) a new storage solution for those two releases from Gametrayz, standard in the reprint and a fairly inexpensive addon for veterans (SO happy to see this), and 3) oh yeah the actual new content: namely, three new gods for each faction, a War god, a Secrets god, and a Magic god, sold in boxes by type rather than faction. I’m not quoting pricing because that could still change before the 20th.

I’m definitely in, at the very least for the storage, and probably for the new gods as well.

(I crossposted to the podcast about the game and the Kickstarter thread also, since it feels relevant in all three places.)

I finally got to play my copy of Glorantha over the weekend. The boxes are so large I did not want to carry it out to meetups. We definitely had fun with it as a dudes on the map sort of game, but the the cost is not worth the gameplay. I’m not saying the cost isn’t worth it, just you are paying for plastic. If you want the experience of a mountain of plastic and the full 3D experience that comes with it, this is one of the few options. Plus, the theme and art are really unique and interesting.

Finally got to try out my KS copy of Small Box Games’ The North - took the full session to grok the strategy to any serious degree, but it’s a neat little grim robot future with great art. Basically, you have 40 points each to start, and a small deck of four Ancient cards, and you’re facing your opponent across Wastes composed of a shared field of Ancient robots and a deck of Facilities. Every turn you’re using limited actions to a) knock points off the other guy (one player hitting 0 is one of the endgame conditions), b) compose a deck that’s useful, c) compose a tableau that’s useful, and d) set both up to score points at endgame. Each card has an Ancient face with a Protocol you can use when playing it into your tableau, and a Spark you can use when it’s going from the center into your discard, and a Facility side with a Protocol that you can use when playing it into your tableau. But by default, you can only play Ancients into your tableau from your hand (which is freshly drawn from your entire deck every turn), you can only add Ancients from the center into your discard, you can only play Facilities into your tableau from the central facility deck. So any other permutation - flipping cards, pulling stuff from tableau to hand or discard, using abilities on cards already in your tableau, and so on has to come from Protocols on Ancient or Facility cards. And that, by default, sticks them in your tableau for the rest of the game. Oh, and each Ancient has a value between 0 and 2. This matters a bit in game, but it’s also what they’re worth in your deck at the end of the game. Whereas every card in your tableau is a flat 1 point. Upgrade for 0s, the same for 1s, but oh, those 2s definitely want to be in your deck. Lots to think about.

Also played Temporal Odyssey the way it’s really designed to play, as a duel. Used Welsie (who can summon future selves to assist her and coordinate archery attacks with them) against Alicia the Medium (who has a Summoning Circle and the ability to steal cards to summon from it). We had a bit of a stalemate for a while, but I finally edged out a win thanks to a pair of artifacts and using the fire breath of a couple of artifact-hoarding Collectors (dragons, really) to wipe out my opponent’s entire forward line and then quickly move in for the (final) kill on his main time traveler. Pretty neat game. 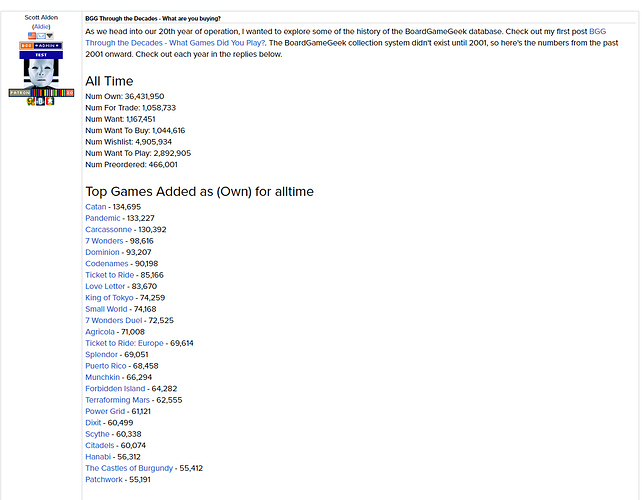 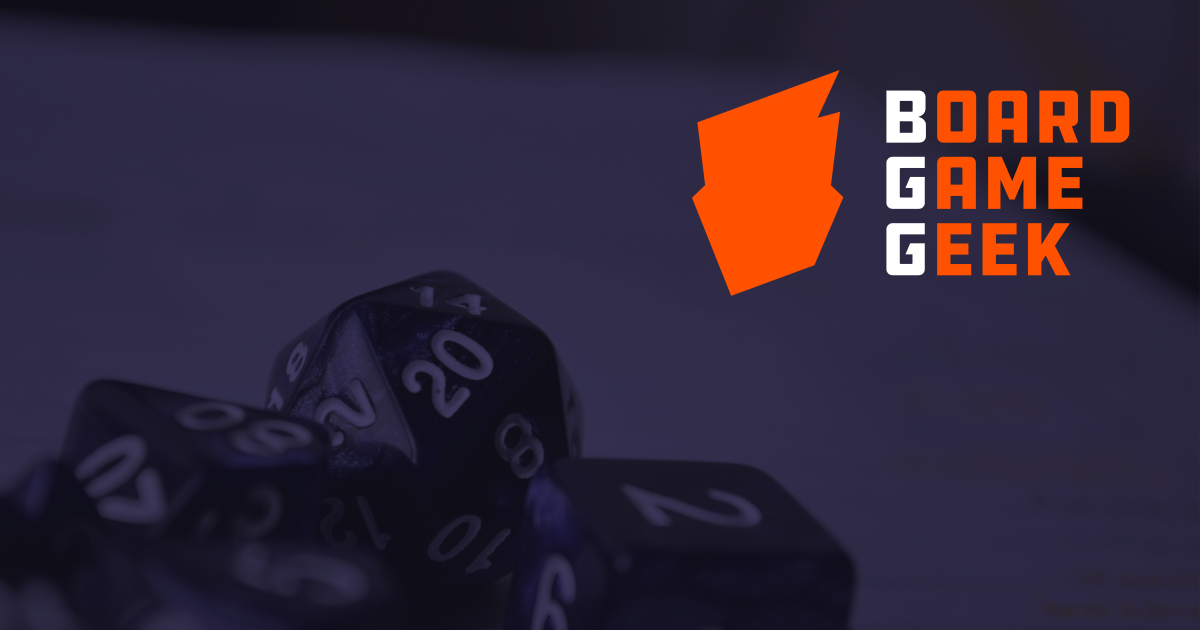 BGG Through the Decades - What Are You Buying? | BGG

As we head into our 20th year of operation, I wanted to explore some of the history of the BoardGameGeek database. Check out my first post [thread=2343352][/thread]. The BoardGameGeek collection system didn't exist until 2001, so here's the numbers...

Patchwork is a good little 2-player game. Not super heavy, but not bad at all. I’m not surprised to see it on a list like that- it comes up all the time in lists of great 2-player games.

Thanks for sharing that link!

I have some questions about the KS for Glorantha.
Not sure if they clarified, but if I back the core do I get the new map? Also does the new content add additional gods or gods that you replace for each faction?

I own 10 of those, and have bought another 3 as presents for friends and family. Real boardgamer status preserved. :)

Of that list, Gloomhaven is by far our most played over the past year. Such an awesome time playing with my wife and daughter. And we have plenty more to finish before Frosthaven this year.

I also have a shrink-wrapped copy of Pandemic Legacy that’s been sitting on my wheels, waiting for its turn. Finding enough time for gaming is hard. :/

Edit: For the “all time list” (screen grab), I own 9 of them physically and have bought another 2 as presents. That’s indeed a pretty who is who of boardgame modern classics.

I’ve bought, either physical or digital, for myself or family, 14 of the ones in Bruce’s screengrab. I own three of them physically.

This is interesting, I feel like these Top Games Added as (Own) lists are much more relevant than any of the list BGG normally surfaces.

The new larger map is an addon (well, two - one for the 3-5 player board and sideboards, one for the 6-8 player that comes in Empires), AFAIK what comes in the core hasn’t changed except for the insert. I already can barely fit the game on my table so don’t know why I would want a larger board. I’m not actually sure what the answer to your second question is but once the project goes live hopefully there will be more details.

Here’s the Kickstarter preview page for The Gods War.

I only want the new map for the art. The core board is UGLY. Especially when you look at what they said it was going to look like in the KS and what it ended up being.

I own 12 of those games and have played all but 3 (Love Letter, Dixit, and Hanabi.)

This is probably “old man yells at clouds,” but I think board games are going in a direction where there is just a lot of crap being produced, and most of it is now just derivative money seeking. Yet another LCG, oh this one’s Marvel/LotR/Arkham. Another worker placement, this one about working in a kitchen in Venice (the last one was Tuscany, this one is completely different).

Before I get too criticized, I’ll note that I do not feel this way at all about computer games. I really do think board games are going through a glut period right now - there’s so much being released, and frankly it feels like very little reason to buy much of it versus just playing what I already own from the last 5-10 years.