Almost but not quite Deja vu.

That last conversation was more geared around hosting games in my apartment.

6 Nimmt would be a good option.

Oh I remember that game. Onto the wishlist it goes.

Not Alone is really good, I need to get that out more. It lives and dies by the ability of the player playing the alien planet though.

I think Exploding Kittens fits the bill pretty well, along with all these other great suggestions.

I second any version of Code Names. Those are off the top of my head. I know I have a few others that hit that 6 player mark but portable is making me draw a blank.

Innovation takes up very little space and plays quick, with weird-but-simple rules. Only plays up to 4, though.

Plenty of suggestions. Too many to action all of them.

Shall narrow it down to maybe 3 or 4.

Tsuro is a fantastic game! It’s a little larger to transport, though. But it’s easy to pick up and games are quick, so it’s easy to cycle people in and out if there are more than 8 of you waiting to play.

Calliope Games (makers of Tsuro) has a game called Roll For It that is extremely portable and easy to pick up. And you can expand it to a greater number of players as long as you have the extra dice for it! I recommend getting the deluxe version; it plays 8 right off the bat and also has really lovely art.

The Mind is fun (and harder than you think it is!) and simple, but only plays 4 people. However, it can be really exciting to watch and feels pretty intense (it’s a co-op game where you’re trying to predict what everyone else has in their hand so you can play numbers in ascending order).

I also suggest Coup. With the expansion, it can play up to 10 people and plays quickly and simply. It’s a bluffing/hidden identity game that appeals even to people who don’t tend to love hidden identity games like Avalon or Resistance (which are also portable, if that’s your jam).

I definitely second Love Letter and Codenames, which I saw mentioned in other replies. Hope you find some fun stuff to play!

Tsuro is a fantastic game! It’s a little larger to transport, though

Not if you play the iPad version. Same for a lot of big board games that are on iPad.

Same for a lot of big board games that are on iPad.

I keep hoping Scythe actually comes out on iPad.

I’m really in love with this game. It’s so simple, but there’s still so much in it. I feel like we’re always discovering weird strategies, and the table meta worried about feeding particular combos by discarding is always developing in fun ways. Great little push-your-luck style game.

Yeah, Tsuro isn’t the MOST portable game, as the box is rather large, but it’s a really fantastic game.

Munchkin might fit well? It’s a little bit longer, but portable and easy to pick up. (We played it in line before Avengers, sitting on the floor waiting for them to let us in.)

Absolutely! You can always tell when someone drops something that another player needs, haha. And I’ve held cards in my hand before and debated dropping them because I was afraid getting rid of it would pave the way for someone else to get a boatload of points. I enjoy this game a lot, and everyone I’ve taught it to has had fun with it as well.

I’ve been looking into a game called Ex Libris lately - has anyone played this and do you have an opinion on it? The reviews seem pretty solid and I think it would be enjoyable for me and my friend group based on what I’ve seen. I’d love to hear from you guys, though - I’ve seen some great suggestions in these threads and have used some of your input to help curate both my collection and the collection I manage for the comic convention. Thanks!

This upcoming game seems targeted at everyone like @tomchick who love that technicolor 70s-fantasy-novel art style of Dungeon Degenerates. 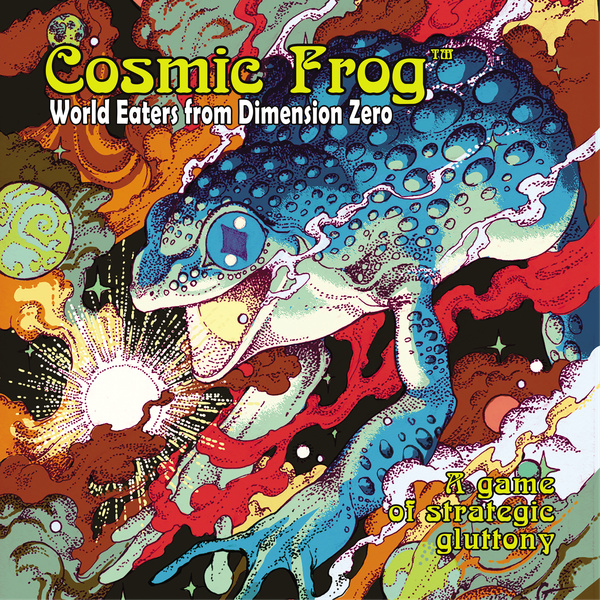 Each player controls a two-mile-tall, immortal, invulnerable frog-like creature that exists solely to gather terrain from the Shards of Aeth , the fragments of a long-ago shattered world.

(Found out about this via the So Very Wrong About Games podcast, which I’ve really enjoyed recently. Thanks to whoever recommended it!)

I am a sucker for a cool theme and an interesting box, that is something I will be keeping an eye on.

Does the game come with shrooms?

Return to Dark Tower kickstarter now available. Pretty spendy but looks cool. I’m glad the tower is still an electronic gizmo even if it’s not the same:

For those interested, Rob Daviau did an extended session on the recent GWJ podcast about it

(About 30 minutes starting at the 22 minute mark)

Rob Daviau from Restoration Games joins the crew to talk Return to Dark Tower, reviving The Witcher 3, Slay the Spire, Wattam, your emails, and more!

Wow that’s way more than I was expecting! Not in the budget for me but I really hope a friend picks it up because it looks fun and pretty simple (based on watching this dice tower playthrough this morning).

Yeah, with both Dark Tower and Fireball Island, I would love to play a modern redesign because of the cool gimmick, but I absolutely have no interest in paying north of $100 for either. I don’t even balk at paying that much for a game - I have dropped more than that on a bunch of Kickstarter coop games. But I do balk at that much for what these games are.

I’m always concerned about player interactivity with deck-building, race-to-the-win games. And will AI cards really be able to play this game? We’ll know more when the Kickstarter campaign officially launches and the manual is posted in a few weeks.