I had some in my regular X-wing group that got into it. However they dropped off because the delta in set quality was just too high.

Plus it was a game that seemed to favor live formats. Otherwise you would eventually get one OP deck and the imbalance overwhelmed design.

Keyforge struck me as a gimmick first and foremost. And not one that holds the slightest appeal to me, at least in that type of game.

I had some fun with Keyforge and played a bit in the local scene for the first two sets (the launch decks and the blue decks.) One issue, in retrospect, was that players didn’t have a lot to talk about at meetups. With Netrunner, you’d have a lot to say about certain cards, potential deck changes, upcoming releases, which faction needed a boost, awesome games you’d had, etc., but with Keyforge, you’d talk about the nature of Keyforge. There was little curiosity about cards, factions/faction combos, or individual skill.

So this may seem strange coming from the guy who owns a game store but:

What version of Clank should I play if I’ve never played any of them? (Original, Space, Legacy)

I"m looking for some new games to play at our 4 person gaming weekend coming up (we are holding this when we normally would be at GenCon). One of our players is far from a hardcore gamer, so I’m looking for stuff that is a little bit on the lighter side while still having interesting mechanics and Clank came to mind for this purpose. Or, if you don’t like Clank, I’ll take alternative suggestions. :)

Personally, while I hear the Legacy version is great (haven’t played, but have looked into it in depth as I plan to some day), the games tend to take 2-3 hours with lots of interruptions for reading in the middle of each game. The writing is great, but the length of each game and legacy aspect might not be ideal if the people with you won’t be around to finish the campaign.

Between the other 2, it’s mostly a question of theme. The mechanical differences between the 2 are small.

Personally, I love the fantasy setting. And if you want a change of map, I’d bring the Underwater expansion too. That way, if you play it enough and people want a change, you get new items, having to contend with underwater rooms and new paths to consider. But that’s without adding any significant burden rules wise.

There are people who don’t like Clank on this forum. But as a light deck builder with a sense of humour, a neat board and a race that finishes with the big bad hunting the players as they run out, I think it’s a great game that a new group should enjoy.

Some alternatives, complementary welcoming games for 4: Colt Express (programming game about robbing a train with a cool train model), If you don’t fear a 3 hour story: Forgotten Waters (feels like there is a lot of components, but each player is only looking at one or 2 counters, the story is a delight and it can mostly be explained as you play), Treasure Island (one player hides a treasure the other pirates try and find before the first player escapes and recover it themselves. Fun drawing on your mini maps as you get clues).

Yeah, Clank is a great threshold game. Simple enough to teach but introduces a lot of concepts that carry over to more complex games, and also there’s enough meat to it to hold the interest of more experienced players, at least for a while. Can’t really speak to which version, though, I’ve only played the base game.

Legacy is probably the best experience but will be a little longer until you finish the game.

Space Clank is more of a gamers game as it adds an interesting way to escape and changing map.

Clank is a little lighter than the other too but no less fun.

So I think it really depends on who you’re going to play with and what theme you like more.

Another (minor) thing to consider is the maps. Clank! In! Space! uses modular maps which’ll mean you can get more diverse scenarios all in one box, but also makes the maps look and feel more bland / less cohesive. Base Clank! only comes with two maps, but they’re more coherent and look a lot better. If you have access to the expansions, Clank! has a ton of great maps which ups the replay-ability and each of them has a twist that the whole map is built around.

High five! For player interaction, theme, and interesting deck-building decisions Quest for El Dorado beats Clank with a stick up one side and down the other.

Another good recommendation. I also own and enjoy that one. It lacks the fun effect of putting clank in a bag and drawing it and the card effects are simpler, but it’s a very solid game too. Easy to learn and competitive.

If I had to pick one to bring to a convention for a few games, I’d probably still bring Clank (the game and maps have got more “personality”, if that makes sense?). But as a longer term purchase, it holds its own.

Well these guys are doing something interesting:

Lone Shark Games wants to help our Friendly Local Game Stores recover as quickly as possible. To help, we put together this Recovery Booster Pack with the hopes that the sales of this product will help in the recovery of your store.

Your Recovery Booster Pack will include: 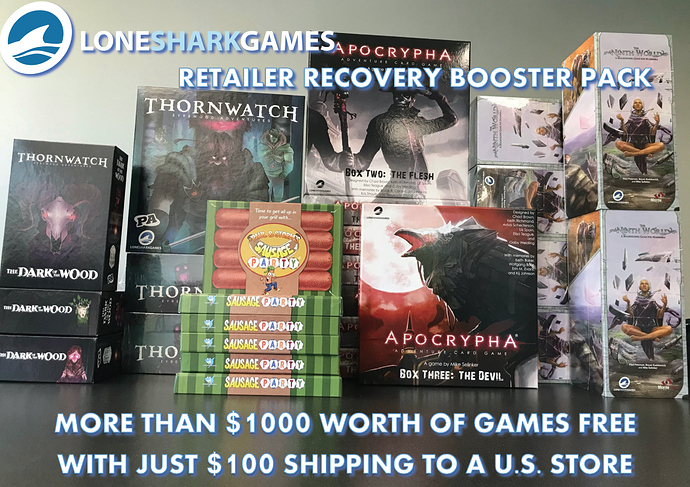 Lone Shark Games Recovery Booster Pack More than $1000 worth of games for your game store, for only $100 shipping & handling Lone Shark Games wants to help our Friendly Local Game Stores recover as quickly as...

The not so fine print!

Thanks for posting this!

I hadn’t really followed the game, but I just watched this video and it sold me on it: 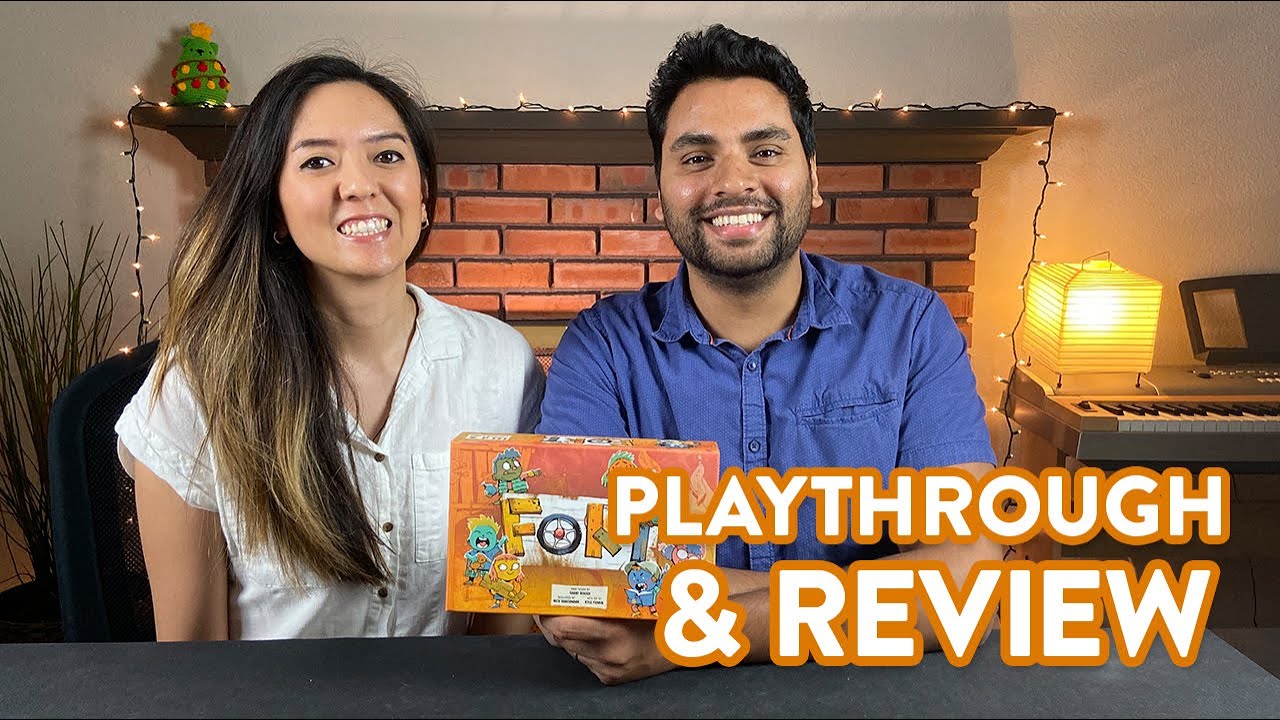 Finally, a deck builder where you can’t simply build the perfect combo and play your turn for 10 minutes. 😄

The mix of deck building (pick friends to make better combos and help you build your fort) and hand management (you only technically play a card on your turn. Any friends you didn’t put in play are up for grabs by other players) and the increased player interaction (you can follow one of the actions on your opponent’s turn, if you have the right cards) sound great. The playthrough is well worth watching (or at least the rules explanation at the start).

It’s not a long game, which means it should also fit during lunch times at the office once that’s a thing again.

I pre-ordered. That said, shipping only seems to be scheduled for late August.

Fort is a card game for 2–4 players about building forts and making friends. In Fort, you’re a kid! And like many kids, you’ll grow your circle of friends, grab a bunch of pizza and toys, and build the best fort. By drafting and playing cards you’ll...

For player interaction, theme, and interesting deck-building decisions Quest for El Dorado beats Clank with a stick up one side and down the other.

With a stick, even!?

I’m confused, are you in Europe? I’m in the US and for me it says Fort preorders start the 21st.

Anyway, really excited about this game as well. I love Imperius and Cry Havoc by the same designer. Short but deep card games tend be my favorite. In one of the bgg threads, Grant said experienced players can get through a game in 20 minutes! The theme and art on this game just tickles me as well.

Space Biff has a great review up.

I’m confused, are you in Europe? I’m in the US and for me it says Fort preorders start the 21st.

I am. Same pre-order date for us. But I pre-ordered from my FLGS, not Leder Games. I don’t fancy paying the extra shipping charges and would rather support the shop.

Ah I hadn’t looked at FLGSs. Thanks!

No worries. I believe it does mean I will get the game late in August instead of early August. But I don’t absolutely need it ASAP. So it’s fine by me.

Like you, the theme really tickles me. It has a lot of charm and it seems to match the game style really well. Collecting pizzas and toys as we build a cool fort with our friends, I’m in!