They are gonna fix stuff!

A thank you, a look back, and major announcements regarding highly requested quality-of-life enhancements.

Wow, skippable cutscenes are finally coming. Props to them for investing the hefty development time it must have taken to add that new feature.

Does this technically make Borderlands 3 the first next-gen title?? The tech behind that must be insane. Skipping cutscenes? At the push of a button? This is the future people imagined 2020 to be.

I think the level cap increase will take that crown for next gen development. They are adding 3 whole levels allowing you to add not one or two but a matching three points to the same ability tree. That’s just crazy talk and I’m hoping it doesn’t push the release time back too far.

'Borderlands' Movie Adaptation in the Works From Eli Roth, Lionsgate

He’s only really made horror films, which I don’t enjoy, but the Borderlands movie certainly won’t be that. Should be outrageously violent and funny, if they do it right.

I think a key part will be music. Borderlands has used pop songs very effectively for the opening montages and the marketing, and I really hope they nail that part in the movie.

I’m only familiar with his work as the Bear Jew. Hope he can direct.

The game comes to Steam in 13 days.

And if anyone wants the EGS version, Humble Store has sale going on for the Super Deluxe Edition w/subscriber discount at $43.49 (57% off!). 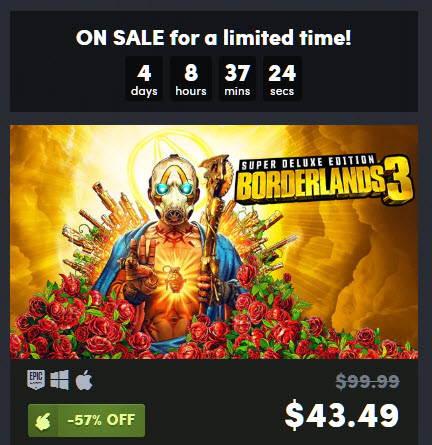 I wonder if EGS will offer a huge discount on Borderlands 3 on the Steam launch date. That might get interesting.

I finally burned out on this after untold hours, grinding all four classes through the story and three of them fully through it a second time in True Vault Hunter Mode (the fourth ended up almost through the story a second time, but by then I was burned out). Got three of the four to 53 after the level cap increase, did a few solo Maliwan Takedowns, farmed a butt-ton of bosses, and had a lot of fun. But I don’t think I can jump back in for the next DLC. Maybe in the fall with sales, but while I had a good run with this (and highly recommend it if you’ve been holding out for it to come to Steam), I’m done for now.

Their not wanting to add new classes pretty much kills my interest in DLC. And the need to replay with campaign with each character kills my interest to try other classes. Borderlands 3 is looking like a one-and-done for me (well, 1.5 and done, given how much of the campaign I had to play due to EGS eating my cloud saves), which is too bad. These looter shooters usually have long tails for me.

Right, that all falls into BL3 not learning from Diablo 3. They needed to add adventure mode, so once you go through the campaign once you could level up other classes elsewhere.

Right, that all falls into BL3 not learning from Diablo 3. They needed to add adventure mode, so once you go through the campaign once you could level up other classes elsewhere.

Bingo. I mean, I’m a masochist I guess, but seven times through the full campaign on four characters…by the last one or two it was a chore.

BL3 like, aggressively learned nothing from D3. It seems almost deliberate to me. Still a great game but it could have been so much better.

Maybe they incorrectly thought, “hey, we’re a FPS, Diablo is not” or maybe they didn’t even see that the two games are essentially the same with different mechanics. Either way, I agree it is a strange failure of vision at the very least.

What’s also strange to me is how little thought they put into why people weren’t playing through the campaign again with DLC characters. They just assumed it was because people weren’t interested in new classes, which in an ARPG is just… what?

I get the feeling there’s not a whole lot of analysis going on over there.

So the daughter and I finally finished B3 last Sunday. It was a fun play, pretty much like the previous games, although we had much less trouble with most the boss fights. I don’t know if they were easier or we have just got a better understanding of the game. Probably a little of both.

Ironic, since the DLC characters (loved Kreig) were the reason why I even attempted to play through the Borderlands 2 campaign multiple times. If it weren’t for the new characters and their classes I honestly would have had my fill of BL2 by the time I finished the game once over on my first character.