Are there any recent and good boxing games for the PC?

Title Bout Championship Boxing from OOTP Developments is really about the only thing out there currently, and it’s a text sim so might not be at all what you’re looking for. It’s mostly a historical replay type sim as well, as running your own “career” takes a fair amount of work on the user end.

As far as an actual playable boxing game I can’t think of a decent one on PC since 4D Boxing.

…oh you mean, THIS decade?

I played that so much. I don’t even like boxing, but god damn I loved that game.

Where are you going to plug in your Wiimote?

Back in “the day”, me, my brother and one of our friends played this ALL the time.
Ringside Seat for the C-64 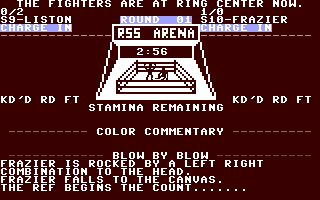