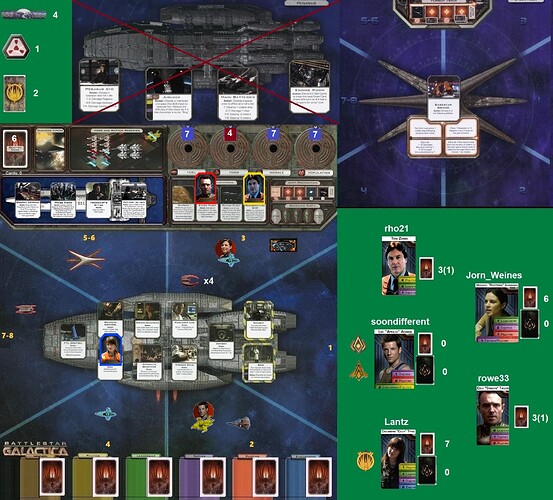 You’re up, whatever model number you are, @rowe33

What do you think, @rho21? Could try the choice of two crisis cards and hope for a food one or try and deplete their card reserves.

It feels as though with 2 pilots and not all that many cylon ships, the humans should have space covered. That’s going to make it difficult to win by population.

Food is the only other low resource, and it’s really difficult for us to target it.

They do have one engineer, but aiming to destroy Galactica seems like a possibility.

We could try for centurions. In particular, we can land that heavy right now if we want. The way the dice have been rolling this game though it might just die immediately.

The humans currently have 13 cards between them, so now is not the worst time to send down some crises. I’m never a huge fan of the regular crisis option as it gives jump prep but no ship activation, so we would risk helping the humans at the same time. Not necessarily the wrong choice here though, especially as card reserves are low. I assume your super crisis isn’t worth running right now.

I think I’d be happy with any of:

I’ll head over to Caprica and play my Super Crisis. It’s an interesting card drainer I think. 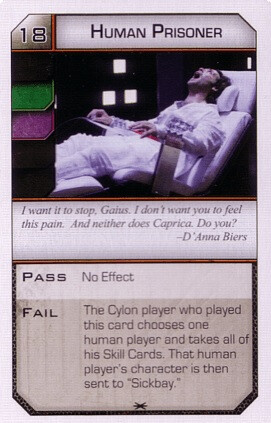 I guess we await discussions until @rho21 has added? Unless there are any pre-check cards?

I can contribute if we go for it.

scatters ashes of Fisk and Faust at crisis

I have tried out a new type of craft today. I am not sure it is the best choice to replace the old Vipers… 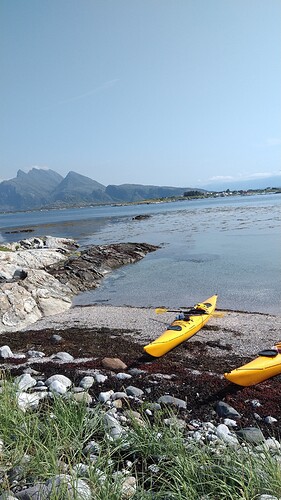 An hour or two.

In both cases, not great.

@rowe33 You choose what order this happens in, and you can use QT to take either Red Tape or Bait into your hand…before they trigger, no cheating. It’s tempting but nay, I say. Down by the bay, what the hey, I just may.

Also since this failed, pick your human target.

You can also retrieve Bait after it triggers, of course.

Cally has more cards, but Racetrack might be the better choice if we want to pick off that civvie.

You can also retrieve Bait after it triggers, of course.

That’s the worst rule, and I won’t do it.

I guess Bait, then Quick Thinking to take Red Tape.

If you want to take Bait take Bait, it’s in the rules, I just think it stinks.