I still have some cash lying around from my tax refund, and now that I have the pressing things (HDTV, PS3, CPU upgrade, Absolute Sandman) either here or on the way, I’m kind of thinking about bumping up to an LCD monitor in place of my (conservative estimate) 8 year old 17" offbrand CRT monitor. This is something I’ve long resisted, under the theory that if I target 1024x768 indefinitely - the native resolution of this monitor - it will be much cheaper to keep my computer otherwise up to date and capable of running high end games well. But at this point…I dunno, I can’t see it hurting much to go to a 17-19" LCD display, and I have this feeling my gaming experience will be significantly improved. I’m making more money now anyhow.

So, are there any such monitors, say at a sub-$150 level, that particularly stand out as a good buy?

I wouldn’t skimp on something I’m going to use for 3+ years, but that’s me.

I agree with RyanMichael. The prices of LCD widescreen monitors have come down tremendously in the last few years, and 22" is a good value point.

I just bought the Acer X223Wbd 22" for the $170 price listed. I was really pleased with it for the 24 hours I used it, before my computer fried itself. I expect it will be fine once I build my new system.

what video card do you have?

My Samsung Syncmaster died last week so I ordered 2 Acer X193W+BD 19" Widescreen yesterday on Newegg for $120 (each) and free shipping. It seemed to be a good price for a DVI compatible monitor thats supports 1680 x 1050 resolutions. When I was shopping around I decided on a dual monitor setup rather then a little nicer 22-24" monitor. I’ve never owned a Acer monitor before so when I get them later this week I’ll be able to give a better assessment of them.

What kind of system/video card do you have?

If you intend on hooking up hi-def components like the PS3 or an HDTV signal, and you want to do that on a computer monitor, then yeah you really have to go with a 22" widescreen.

You can’t give an honest assessment of an Acer product until you’re 2 weeks out of warranty and it breaks on you. Or it shows up on your doorstep DOA.

Yeah, who are these people advising the OP to upgrade from 1024x768? It’s downright spacious compared to the screen on my ten year-old iMac.

You can’t give an honest assessment of an Acer product until you’re 2 weeks out of warranty and it breaks on you. Or it shows up on your doorstep DOA.

The monitors I bought come with a 3 year warranty if I get past the warranty period on a $120 monitor I’d be satisfied with my purchase, but DOA would suck! Keeping fingers crossed XX

Consider the native resolution and the video card you’re using. It’s hard to recommend one without knowing what you’re using to push pixels.

Only caveat I really have right now is if it’ll run nicely on my 360.

I’m getting a new custom built computer this summer, so I can tailor the vidcard around the monitor.

The monitors I bought come with a 3 year warranty if I get past the warranty period on a $120 monitor I’d be satisfied with my purchase, but DOA would suck! Keeping fingers crossed XX

You’re lucky. Some of the older Acers had a 1 year warranty. I know at least 2 people that had them die before 18 months had passed.

Compared to the Samsung I linked earlier, which would you suggest buying? 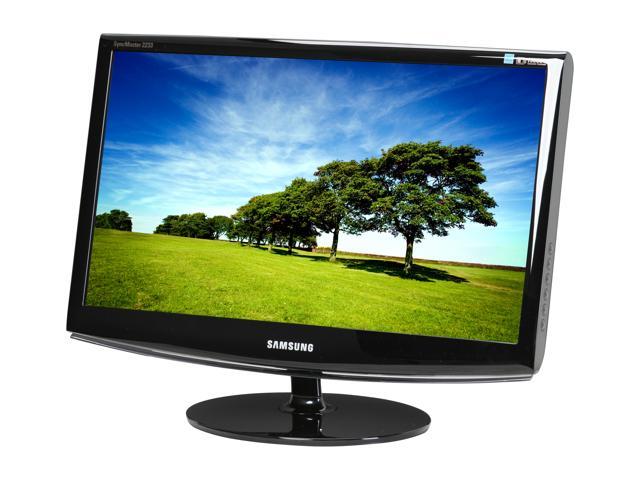 Asking Xaroc, compared to his that is.

Is that a good gaming monitor?

Compared to the Samsung I linked earlier, which would you suggest buying?

Asking Xaroc, compared to his that is.

Is that a good gaming monitor?

Yeah, I’m pretty wary about bumping up to 1920x1080 for precisely that reason. Any video card you buy today is not going to be very happy a year or so down the line with whatever new hardware-destroying engine (Crysis 2 anyone?) thats released. And dropping down to a lower resolution always looks awful on these monitors.

I bought a Chimei CMV 221D (22" 1680x1050) a number of months back for $180 after rebate. While not a top of the line monitor, it has been perfectly sufficient for gaming. Granted, I haven’t tried one of the pricier monitors so I don’t have a good point of comparison (and that’s done on purpose… can’t miss what you don’t know…)

I have no interest in dual-purposing an HDTV as a computer monitor or vice versa. My 26" Samsung HDTV is a wonderful fit for my console games (and BluRay), and my computer will remain hooked up to a separate monitor. I currently have a 9800GTX+ and I’ll have a 3.0 ghz dual-core Athlon in a few days, so I think I’m probably good for a couple steps up from 1024x768 (I can currently run pretty much anything I’ve tried comfortably at that res and reasonably high settings, including Crysis.) and I wouldn’t be surprised if I’m comfortable maintaining that level of performance. But 22" plus just strikes me as way too high maintenance and overkill.