I haven’t tried it mainly because of 2 points.

Please try it and let me know what you think of the game, haha. I also search for +Card Games on steam too, some nice stuff on that too.

If there was a PG version I might’ve been tempted to buy the game. I wonder if the XXXness of the game will actually help sales.

Going by the description, it’s pretty much the entire hook of the game, so not sure how they would do that without a complete overhaul. If they covered up the naughty bits it would still qualify for the rating, I think.

I’d say Chrono Ark is an easy recommend in its current sate. For $14 I find it a great coffee break game.

A quick summary:
It is a deckbuilder - you recruit two characters at the beginning of your run - these will seed your deck with abilities and cards specific to that character, as you level up.

The battles play sort of like a combination of a DRPG and Trials of Fire. You draw from a shared deck made up of your characters cards, as well as a very small pool (you start with 1) of neutral draw cards. Each turn, a character can play one card at-cost, then any additional cards played by that character cost an additional mana to play. The characters have different roles and sub-archetypes to build within that role. For example, Joey is a healer class, but can also be specced (by choosing new cards during level-ups) to perform powerful debuffs and buffs.

Another interesting mechanic i’m still learning the use of is card fixing. You can take almost any card, and fix it, making it available at all times, once per turn, regardless if you draw it or not. This comes at the cost of +1 mana when used. I’m sure you can think of how this would greatly accelerate a deck if you’ve played Magic or almost any card game of that variety.

This has a decent amount of meat on its bones with somewhere in the upper teens in terms of numbers of characters, with each character playing wildly differently. As you complete combat encounters you gain points that can be spent to level up a character and gain new cards, or gain draw cards/mana regen, each of this things with varying costs as you progress.

Theres quite a bit more to this game like the inventory and equipment system, but I’ll just cut to the chase and say its a solid recommend for card game fans or fans of anything relatively within the realm of Slay the Spire or Trials of Fire, but it is probably a big bonus if you look at the screenshots of the anime characters and say “Yes, I like this.”

Thanks SweetJP for making it hard to break my no EA rule :-/ :)

This just went to full release and the reviews look good.

Been playing this single player.

Its pretty fun single player, but the expansion and play the campaigns, then play against bots.
Scratches the “I wanted Hearthstone with WW2” itch. Gameplay is vanilla, doesnt do anything fancy.

No idea how multiplayer is if thats your thing.

Unfortunately, while it does some cool things, in the current state runs are much too long and fights are repetitive.

I enjoy Kards, but it isn’t a deckbuilder by genre, it’s a card game where you build your deck sure but that isn’t what defines deckbuilders

Just got my first win in Nowhere Prophet (on the base difficulty). Really liking it so far, and it does some things differently than anything else I’ve played in the genre.

There’s no deck cycling – each follower card is a named individual, and once you run out of cards in a battle, you’re not getting any more. This results in making the battle of attrition over the course of a run more varied than just “how much health did I lose and did I use up any consumables?”

In addition to your leader’s a health pool, followers that fall in battle become wounded. You can rotate them out of your active battle deck before the next battle to keep them safe until they can be healed. But if you leave them in, they lose 1 health and cost 1 less mana to play (generally a favorable tradeoff that makes them more powerful/efficient). If they’re destroyed again, they’re dead for good, but if they deal the killing blow to the enemy, they heal for free and get a +1 power “blessed” buff for good measure.

So there are lots of tricky tradeoffs between damage to your leader, wounds to your followers, when it’s worth the risk to play a wounded follower, when it’s worth risking damage by prolonging a battle to collect extra resources or control who gets the killing blow, etc.

Glad you like it. It was one of the better games I played in this genre. Now that the Dev fixed the unlocks system it’s quicker to try different race/leader combos.

Also, I like how some battles can go really wrong REALLY quick.

Strangely enough, I just picked up Nowhere Prophet on the Switch thanks to 50% off. I am midway through my first run on base difficulty and liking it a lot.

In addition to what Thraeg has said, the energy system is similar to Hearthstone - you start with 3 and refill +1 every turn, so 3, then 4, then 5. There’s two decks though, representing your followers which come out on the field, and your leader’s actions, which are basically sorceries. I like this addition.

I also like that there’s two ways to remove cards from your decks - your follower deck, you can intentionally play your follower when wounded to remove it permanently. But you can also edit your follower deck at any time, so you don’t really have to. Your leader deck, every level up you have to add a card and you get a token to allow you to remove a card. So that’s more limited.

Followers so far have neat abilities, and I imagine the unlockable factions will play with that even more.

Events call out your followers by name which I think adds to the story a bit and makes me more attached.The story overall is neat post-apocalyptic weird.

Overall I am quite psyched to explore more!

I still play Monster Train but I am starting to burn out on it pretty hard. And I haven’t touched StS in ages. Anyone else pick up a new one of these lately? Still so much in early access…

I still play Monster Train but I am starting to burn out on it pretty hard. And I haven’t touched StS in ages. Anyone else pick up a new one of these lately? Still so much in early access…

Griftlands is great in my opinion. Closer to Slay than Monster Train but with a couple of its own systems and superbly sublime Klei quality.

Griftlands entered Early Access today (yay) but only on the Epic store (boo). It got a complete content rework (huh) from an open world RPG-ish thing (aww) to a more long roguelike experience (hmm) with strong Slay the Spire influences for the combat (Hell yeah! All the Slay the Spire dislikers can burn in hell - this is a great decision you plebeians). The different player characters will have different story-quests within the game world. You meet lots of NPCs, making friends and enemies that…

Slay also has a good selection of mods and a smart guy made a list of recommended mods that are worthwhile and change the game a lot.

Updated mod suggestions The best rougelike and game of the year for 2018 and 2019, and most other years. If you haven’t tried Slay yet apply the warpaint and finally join before the price increases! Experience a game of exceptional makeup. Eyeshadows will mark you as you won’t be able to stop playing this great game. For those who already enjoyed Slay a lot and want to try out additional stuff here are my personal mod recommendations. This is an updated list of my previous mod overview. Dis…

Thanks! Yeah, Griftlands is great. I played through both characters who have a full story. Will probably do the same for the new character once their story is finished, and then wait for official release.
One thing I’m wondering about that game is whether I will get into playing the game solely for the cardplay aspect, or “just” enjoy replaying for story differences. I like the cardplay but I’m not sure I could do endless runs like I have for StS or Monster Train. I guess I’ll see once it’s been thoroughly polished to a fine sheen.

As for StS mods, I have messed around with Downfall, which is very interesting and also hard, and a couple other character mods. I don’t think I want to do the ascension climb any more, even with new characters. I’ve been more reluctant to play with mods that just add stuff, but I’ll take a look at the ones you suggest. The Jungle was fine for a couple times through as well. Ultimately though I’ve just played a LOT of StS.

Two days ago Vault of the Void was released in Early Access.
Well designed and implemented so far.

Pretty close to Slay the Spire mechanically. The main difference is that your deck always has 20 cards and you can freely adjust it before each fight using the pool of cards you accumulated on your run. 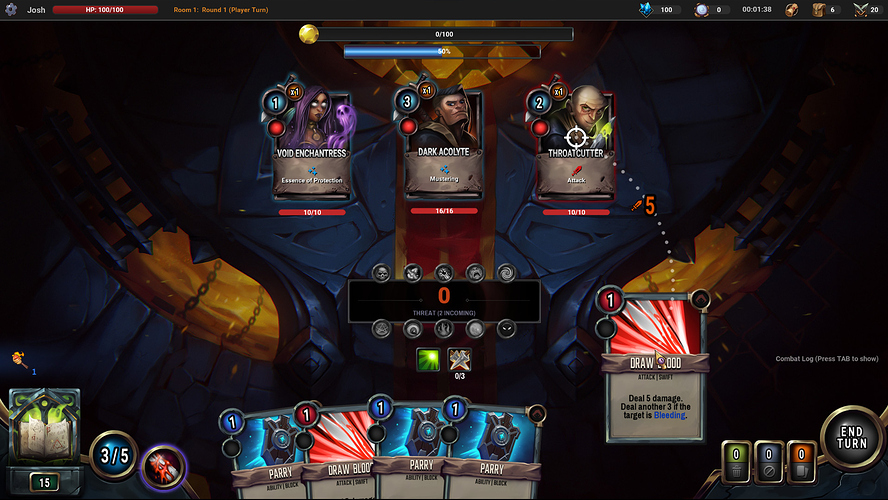 I’m sure many people will like that one (Seeing a lot of praise), but fiddling with cards in my deck between fights is exactly what I don’t want in a deckbuilder, personally.

Don’t know if this belong here but I saw this on Steam. It’s looks like a Dominion/Ascension clone.
The art work is absolutely beautiful.