Looks like both motorcycles and night-time racing will be added to Burnout: Paradise in August. I have to say, this is very cool.

Support like this is what will get me to probably pick up a copy at some point, even though the demo left me a bit cold.

Adding motorcycles to Burnout will be either gruesome or conspicuously out of place. Given Burnout’s E-rating (!), I’m guessing it’ll be the latter.

Motorcycles are weird where cars don’t have drivers, unless they are going to add drivers to cars too?

Will they have riders?

There’s a rider in the screenshot.

Adding motorcycles to Burnout will be either gruesome or conspicuously out of place. Given Burnout’s E-rating (!), I’m guessing it’ll be the latter.

Now don’t lose your head over this. That’s right, you won’t be able to.

Having riders is a mistake, and flies against the entire spooky vibe of Paradise City. The cycles should really be ridden by skeletal defleshed Terminators.

I suspect that things like Showtime mode will have the rider tumble off harmlessly at the start and then have the bike continue on riderless as it gets smashed to bits.

Though it does make you wonder if perhaps they’re now trying to chase down their newly-sentient, out-of-control former rides as the mastermind behind the whole scheme laughs at them from his radio transmission bunker.

I’ve always had an interest in motorcycles with Burnout, but how they’d work, well, I’m not sure. Given the nature of Burnout, though, I always imagined motorcycles would end up in some pretty sweet Road Rash style action with riders duking it out. How they’ll compete with cars, though, is another question.

…fuck, now I just really, really want a new Road Rash game. Get on it, EA!

Not too hot on the motorcycle idea, but the night driving should be cool and it’s great to see them continuing to support the game.

Will they have riders?

Of course they will.

I don’t think the dynamic is going to work well given most of the modes in Burnout-crash mode with a motorcycle-really?

…fuck, now I just really, really want a new Road Rash game. Get on it, EA!

I was kind of thinking the same thing, actually.

Anyway, I’m a little surprised that people have taken a slightly cautious tone with this one. In my opinion, motorcycles will only add to the game. I don’t honestly see how they could detract. In fact, if they had an option for a motorcycle only city…

And the fact that people are mysteriously missing from Paradise is not too much of an issue for me. The constant stream of advertisements are much more disturbing. Especially, if it’s a city of ghosts… Ghosts who wear ‘Diesel’ jeans. Now that’s horror.

I’m gonna be online tonight with my brothers and a friend or two trying out the new stuff and playing the online modes. The game will be open to friends if you want to jump in (or send a friend request, I’ve got a few spots open). We start at 6pm PST and will go for two hours or more. 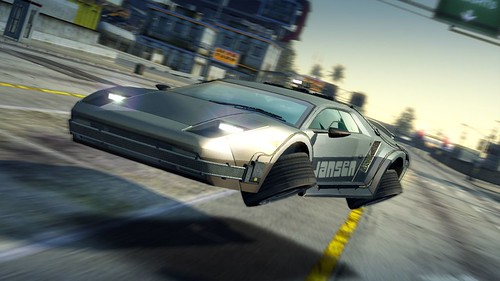 Will it leave flame trails after hitting 88mph?

Hmm, where is the flux capacitor???

Will it leave flame trails after hitting 88mph?

They actually announced that it will. When you use your boost, anyway.