Looks like the studio behind the Dead Space games and the still-in-development Star Wars game is no more. EA strikes again!

EA is shutting down Visceral Games, the studio behind games like Battlefield Hardline and Dead Space, the publisher said today. The Star Wars game in development at Visceral will be revamped and move to a different studio, EA says, although it will...

Absolutely awful news, but their Star Wars game is still in the works at EA Vancouver and others (though the release date is now TBA):

Our Visceral studio has been developing an action-adventure title set in the Star Wars universe. In its current form, it was shaping up to be a story-based, linear adventure game. Throughout the development process, we have been testing the game concept with players, listening to the feedback about what and how they want to play, and closely tracking fundamental shifts in the marketplace. It has become clear that to deliver an experience that players will want to come back to and enjoy for a long time to come, we needed to pivot the design. We will maintain the stunning visuals, authenticity in the Star Wars universe, and focus on bringing a Star Wars story to life. Importantly, we are shifting the game to be a broader experience that allows for more variety and player agency, leaning into the capabilities of our Frostbite engine and reimagining central elements of the game to give players a Star Wars adventure of greater depth and breadth to explore.

This move leads to a few other changes:

A development team from across EA Worldwide Studios will take over development of this game, led by a team from EA Vancouver that has already been working on the project. Our Visceral studio will be ramping down and closing, and we’re in the midst of shifting as many of the team as possible to other projects and teams at EA.

Lastly, while we had originally expected this game to launch late in our fiscal year 2019, we’re now looking at a new timeframe that we will announce in the future.

I really enjoyed the first two Dead Space games. I feel so sorry for the team.

I sure hope Visually Stunning Studios isn’t next. :(

Dumb joke, but I really do feel bad for the people let go. I hate EA.

I really enjoyed the first two Dead Space games. I feel so sorry for the team.

I love all three Dead Space games, the third mainly because of its openness in the space section, letting you go EVA, and then the insane final boss. I’m going to need to replay those soon.

the third mainly because of its openness in the space section

The space graveyard section might have been my favorite part of the whole series. I wish they set the entire game there!

Sounds like the Star Wars game is basically cancelled and being retooled into a multiplayer game. Is Amy Henning still on it?

An odd bit of irony there. I read Jason Schreier’s Blood Sweat and Pixels last week, and the last chapter told the story of Star Wars 1313. After the sale to Disney, a group of Lucasarts employees went to Visceral to give a pitch meeting about 1313 to see if they would take on the project. After a lengthy discussion of the game, the head Visceral guy stood up and told them “I’m not sure what you were told about this meeting, but we aren’t going to take over your game, we just wanted to interview some of you for jobs.” The Lucasarts guys were crushed.

And now Visceral has its own Star Wars title yanked away.

but their Star Wars game is still in the works at EA Vancouver and others (though the release date is now TBA):

Okay, that’s obviously just P.R. talk for scrapping everything and starting over again with zero continuity outside of the publisher and the licence.

EA says Visceral's Star Wars game is moving to a different studio, but it's clearly going to be a brand new game kotaku.com/ea-shuts-down-… https://t.co/5G2bX3YQZg

I would play that.

I’m actually pretty surprised Visceral lasted so long after Hardline tanked. This sucks for the folks at Visceral obviously. I hope they can get shifted to other spots at EA or pick up new jobs elsewhere.

I was surprised they lasted so long after Dead Space 3 tanked.

I wish them well. The original Dead Space eventually turned into one of my favorite games of all time despite all the problems I had with it.

I had been hearing rumors for months now that Visceral's Star Wars game was in trouble - now it's essentially canceled.

Which lines up with the EA statement. Amy Hennig/Visceral’s story-based Star Wars game is dead. Whatever EA makes now will just use whatever Visceral assets they can repurpose, but the game will be completely different.

And the only bit we saw of whatever Visceral was making:

A former Visceral dev discusses how Dead Space 2 wasn’t profitable back in 2011, so I can imagine, even with the Star Wars licence, the market would be too harsh by 2019. 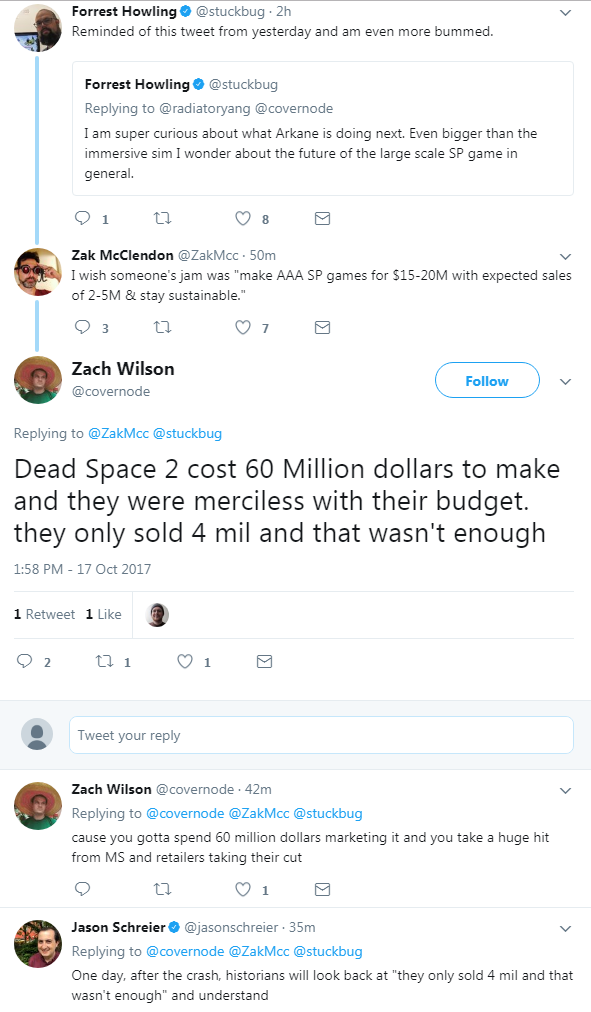 Kotaku updated the story with new details (will assets from Visceral’s game and will be lead by someone else):

In an e-mail to employees obtained by Kotaku, Söderlund offered more details on the Star Wars game, which was codenamed Ragtag:

A development team from across Worldwide Studios will take over development of Ragtag, led by the EA Vancouver team that has already been working on the project. Steve Anthony will lead this team, and we will use much of the work that has been done to date by Visceral – the assets of Ragtag that have already been built will be the foundation of this new game.
(Steve Anthony is an executive producer at EA.)

It’s safe to presume that the new incarnation of this Star Wars game will involve “games as a service” elements, as has been EA’s mandate for quite some time now.

EA was not clear about the status of longtime Uncharted director Amy Hennig, who joined Visceral to direct this Star Wars game after she left Naughty Dog in early 2014. In an e-mail, an EA spokesperson said: “We are in discussions with Amy about her next move.”

I’d been hearing rumors for quite some time now that Visceral’s Star Wars game was in trouble, and that studios across EA were brought in to help give it vision and direction. Now, that game is no more.

It is in line for that location. When we built The Sims 3 etc at Redwood Shores the allocations for that campus were very very high. It is a beautiful place with world class facilities but was more expensive per head than renting an office in the financial district in SF.