So, time to take a look at CA’s plethora of ballot props. It’s a heavy year for props, with a wide range of topics and some big ticket proposals. Historically, I have leant very heavily towards “NO” on most Propositions, due to what I perceive as abuse and overuse of ballot initiatives in CA. If the topic was too technical or detailed, I wanted it handled in the Legislature. If it involved funding for ongoing needs, I wanted those handled through the General Fund rather than bonds or “dedicated tax revenues” (which I consider tax micro-management.) In general, if it was coming from corporate groups, corporate funded groups, or even corporate-exploited/adjacent groups, I was a NO. Over the last 15 to 20 years I’ve only voted YES on a few narrow propositions. This year, gestures broadly at everything I was feeling more open-minded. So here are my takes, for discussion and comment:

Warning: this is super long b/c there are many props and I have something to say on most.

Prop 14 Stem Cell Funding - YES - This is a bond measure and fairly technical but it has strong positive policy bona fides IMO and the analysis convinced me the prior round of funding of this type a few years back was well spent, so I’m a YES. In prior elections this might have made the grade to Yes for me but it was would have been closer. This year is like, well when I read the GOP tax-hating BS opposition argument I literally wrote “FUCK YOU” on my voter guide.

Prop 15 - Partial Reform/Repeal of Prop 13 in regard to Commercial Properties - YES FUCK YES FUCK YOU GOP YES - Prop 13 has long been a hated devil in my view of CA politics and this prop seems like a reasonable adjustment, allowing owners with commercial properties of $3 million and up to be taxed at fair market value. The GOP anti-tax jihadis are opposing so I wrote FUCK YOU on their ballot argument too. Buncha whiners. This is looooooooooong overdue.

Prop 16 - Allows consideration of racial diversity as a factor in college admissions, hiring, etc. - TBD - This is a partial repeal of the “Ward Connerly Initiative” from the 90s which did away with affirmative action in CA. I’m pretty conflicted on this issue. I don’t want race to be used to discriminate but I understand that affirmative action has a potentially positive role. On the other hand, this doesn’t include consideration of economic status which I feel needs to be in the mix as well as racial/gender/etc. diversity considerations. Part of me wants to support this b/c the usual GOP jerks are opposing it but I dunno. I appreciate input on this one.

Prop 17 - Restores voting rights to felons on completion of prison terms. - YES - This is a good example of something I would support even in a normal year - something fairly straightforward and good policy but hard for the Legislature to fix due to anti-crime-pandering and cowardice. CA already restores voting rights in most cases but only after completion of all parole etc. After seeing the idiocy in Florida with fines, a nice clean “restore voting rights when prison term completed” seems extremely reasonable to me.

Prop 18 - Allows 17 year olds to vote in primary and special elections if they would be eligible to vote in the next General Election. - YES - This seems relatively straightforward to me - if you can vote in the general election, voting in the preceding special or primary elections makes sense. Also, something the Legislature can’t do b/c it requires a change to the state Constitution.

Prop 19 - Essentially limits some property transfer rules that enable certain types of estate tax dodging. - YES - It’s a little technical but it limits the kind of BS I hate, and that is hard for a lobbied legislature to fix so I’m for it.

Prop 20 - Restricts parole for certain offenses and elevates some offenses to felonies. - NO - I’d be against this on my old general principles and also on policy grounds but on top of that when reading the arguments, the “Yes” argument is such a facile evocation of FEAR CRIME!! CRIME BAD!! TROPE TROPE!! that I wrote “FUCK YOU” on my ballot guide yet again.

Prop 21 - Increases ability of local governments to enact rent control - TBD - On the one hand, I really want more affordable housing in CA, but I’m not sure direct rent control is the best approach. This is pretty technical, and I saw a lot of conflicting claims in the arguments. I’m open to input on this one.

Prop 22 - Exempts businesses like Uber and Lyft from the new law and allows them to continue to treat employees as independent contractors - NO HELL NO!! F U UBER AND LYFT HELL THE F NO! - This is an issue I’ve studied very intensely as a workers’ compensation lawyer and yeah, Uber, Lyft and the whole gig economy need to comply with reasonable labor laws and treat their employees like employees. I can discuss this in more detail if folks care.

Prop 23 - Some complicated thing about kidney dialysis - NO - Why is this an initiative? Probably b/c some deep pocket thinks it can hoover up some bucks. It’s complicated, it’s medical, it’s technical, and it’s a classic example of why we need Legislatures with staffs and committees.

Prop 24 - Changes consumer privacy laws - TBD - I am in favor of better protecting consumer privacy and more strongly regulating corporations, but I’m not sure if this does that. There are arguments that this prop actually weakens a stronger law the legislature already passed, but it’s so technical and out of my area it’s hard to tell. I’m leaning NO but I would appreciate input.

Prop 25 - Reaffirms a law that replaces money bail with a system based on public safety and flight risk. YES - Based on my deeper understanding of the prison-industrial complex and systemic racism in recent years, this is a no-brainer to me.

I don’t live in CA but that was a really interesting read. Thank you, @Sharpe.

Rent control is definitely not the best approach to affordable housing, but if it is the best you are going to get?

I’m all in on give-no-fucks @Sharpe.

Me too. Parts of this cracked me up.

Thanks for this. I live in California and appreciate any honest input on the propositions as they can be confusing. A good read.

Wow, this is awesome! Thanks so much. If you don’t mind, I might copy-and-paste to a few friends.

Not sure how I feel about 16. I read bell hooks’s argument for AA and it made complete sense. You write a job description with requirements. Any candidate who meets those requirements should be considered, giving preference to candidates from underrepresented groups who have historically faced discrimination. (A proxy for this is groups covered by any state or federal law that defines a protected class in that jurisdiction.) Then again, it’s kind of an albatross and it lends itself to nefarious capture. And I’ll have to read the prop to see how it’s worded. I lean no because I feel like this is something technical that should be handled in the legislature.

I haven’t received a voter guide or ballot yet. Has anyone else?

Wasn’t there something on the last elections California ballot about Kidney Dialysis and what entities should be allowed to do it? It threatened to close down several places that did it. I don’t remember the reasons why though.

I received a voter guide yesterday. Ballots go out Oct 5, I believe.

I don’t remember the reasons why though.

It’s mostly a set of regulations requiring specific reporting, permission from the state to close, requiring an on-site physician during operating hours, but the most troubling one is this:

treat all patients equally regardless of how they pay for care.

This should already be happening.

Kidney disease is a rising problem in the US, treatments are expensive, transplants are expensive and not plentiful, and CA has tried to tackle issues before. Keep in mind, people getting dialysis, we’re talking multiple contacts a week kind of the whereas many of us might be hard pressed to engage healthcare every couple of months, if that. This is a very sick part of our population with an ongoing need. The death rate in this group, those getting treatment and waiting for a transplant… not great.

I think a lot of the patient complaints are coming from the privately run dialysis clinics, like Davita.

I couldn’t say one way or another whether or not the ballot would actually result in what they want, safer, cleaned (infection is a problem here too), and a better patient experience over all. I believe the physician requirement is to ensure someone is there to provide emergency treatment. I’ve heard having someone pass out or enter some sort of emergency type situation during treatment is not as rare as everyone would like to be… but I don’t see requiring more physicians would actually save costs either.

CA had a different dialysis issue on the ballot a couple of years ago, and that failed. As this number grows, I suspect CA and other state will likely see more like it.

Have to stare at this for a bit to make sense if it, but it’s pretty good. 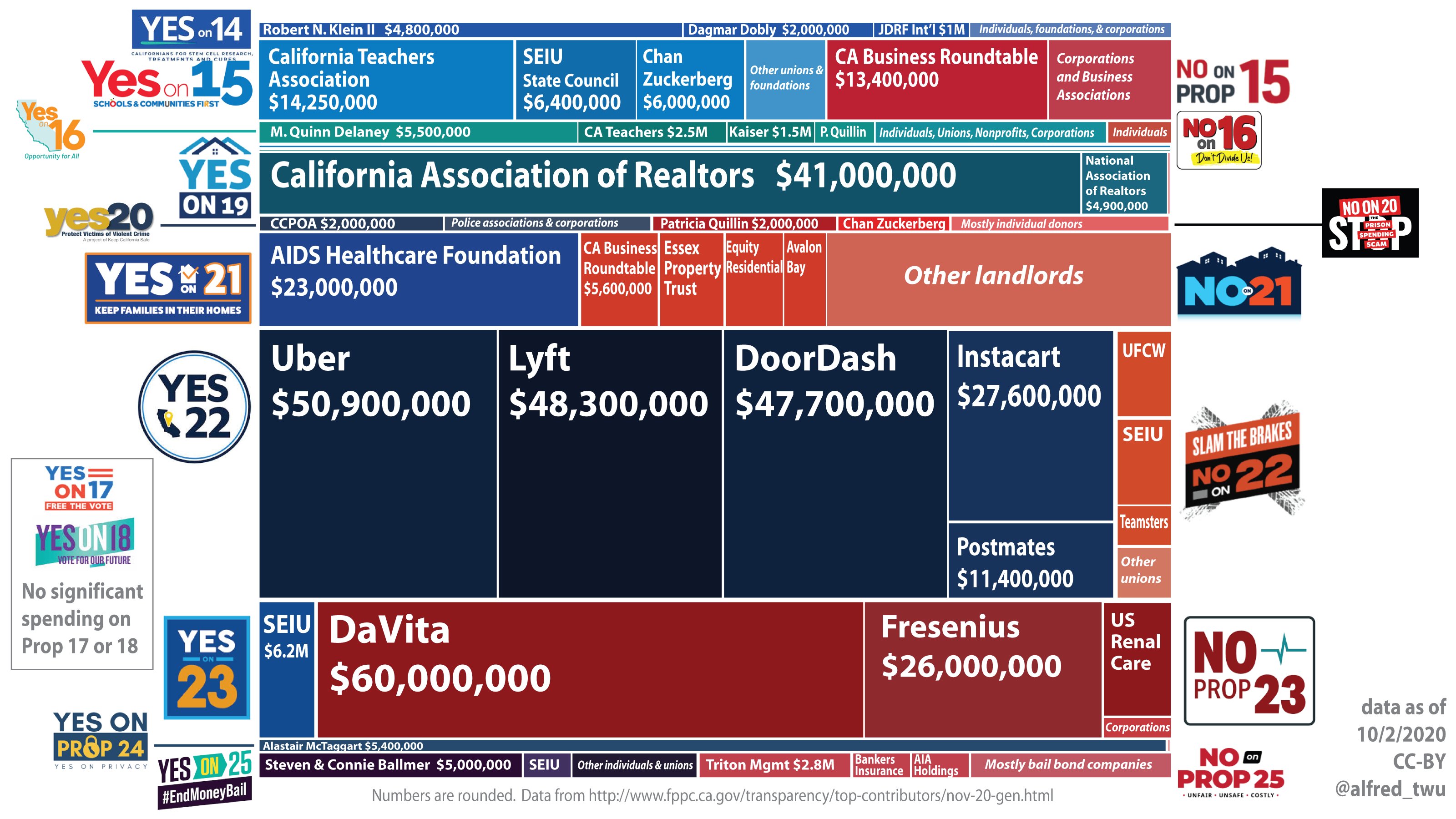 Trouble is, I live in Oregon. And these are California props, and it should know I am in Oregon (I see some Oregon specific ones too, but the Prop 22 alone matches all Oregon initiatives)

*and by I am, I mean my wife is while watching show streaming on Xfinity.

I’m still amazed when I get any political ads at all, well outside Trump. His stuff is all over YouTube.

good god, tell me about it. For a brief period around the conventions I saw some Biden ones, but right now every time I open Youtube it is one of two things.

The second ones I don’t mind at all.

I like when I get Trump ads on Beau of the Fifth Column videos.

And all the ads I recall at the moment are fake surveys, like click here and tell me how great I am pretend type surveys. ugh. Maybe once or twice it was some kind of merchandise.