Can anyone suggest a car?

If we want a smallish car that is fuel efficient, reliable, and can handle steep roads, does anyone have any suggestions? Honda Civic?

I got a 2018 civic hatchback and I love it. I got the sport touring trim.

It was proving him right when unfortunately a Mazda6 pulled right in front of it. One of my daughters was driving, and another was in the front passenger seat. 100% the other driver’s fault, and they were going about 45mph, so every crumple in the front crumple zone got crumpled, airbags went off (luckily I had the defective Takata ones replaced a month or two before), the engine broke some of its mounts and the front axle, and that was it for the car. But thanks to Honda’s engineers, my daughters walked away without a scratch despite being in an Econobox, with zero intrusion into the passenger compartment (and the Mazda took a mean shot right on the driver’s door, but that driver was also uninjured). Even being 12+ years old & ~130k on it, IIRC the insurance company paid me $8800 for it, so it held its value well. I decided it was time for a slightly bigger car, so I put the insurance money down on a new Accord. It is a 2017, and still looks and runs like I just drove it off the lot.

I’m a big Kia fan here. Between my wife and I, our last 8, maybe 9 vehicles have been Kia’s. I basically lease/finance for the 5-year bumper-to-bumper warranty period, then give them back the keys and get something new. I love the Kia design language, and for a tech-head, no other car brand will pack in as much technology for the price you pay. I have had heated seats/steering wheel in my car for years when only luxury brands like BMW and Mercedes-Benz had it.

I know most PF mavens say that’s a sucker’s game, but I really like the cost certainty of vehicle ownership done that way. I never get hit with surprise maintenance expenses.

We are currently in 2018 model year vehicles. I’ve got an Optima EX Tech and she’s got a Sportage EX. I would love to swap out my Optima for a 2022 Stinger, but I think that’s a bit out of my price range, currently.

I’m not sure about US pricing, but I would think you could get a Seltos in your price range, if you could find one.

Congrats man! We bought a 2003 Civic for my mother-in-law brand new and she’s still tooling around in it 18 years later. It runs great, looks good and has had very few maintenance issues. I think it’s been in the shop more for recalls than for actual problems! I also own a 2004 Accord we bought used from a family member when my son turned 16 (now 21). It has also been trouble free and a great car for him through the years. Honda makes some quality vehicles.

Honda also has a handle on very subtle, unremarkable looking cars, like this one:

Ok, I actually like my angry Pokemon, precisely because it’s weird.

I’d like to take this opportunity to say that I do not think I will ever buy another sedan in my lifetime, as I am totally sold on hatchbacks.

Did I say that out loud?

I’d like to take this opportunity to say that I do not think I will ever buy another sedan in my lifetime, as I am totally sold on hatchbacks.

If we’re confessing stuff now, I only want to drive muscle cars now.

Amen, though even if they take the guise of a hot hatch. Being able to tuna your way through the manatees is pretty damned nice.

I only want to drive muscle cars now.

I used to feel that way, but now I only want electrics. In between the destruction of my Civic and the purchase of my Accord, the rental car they gave me was a brand-new Dodge Charger R/T. 5.7L Hemi V8, 370hp, 395 lb/ft of torque, rear-wheel drive. Hell of a lot of fun to drive for a couple weeks. I gave serious thought to buying something with a ton of power, but ultimately I really just wanted a car that wouldn’t cost me a fortune to run (now with $5 gas in California, I’m very glad to not have to feed that 15mpg Hemi) and bought the Accord.

Then a couple years later came my Tesla, a 2019 Model 3, Dual Motor, Long Range. 0-60 in under four seconds, and an IIHS Top Safety Pick+ rating. There went my plans to get a '67 big block Corvette some day. I like being able to blast around without drawing attention, so I don’t miss the roar of a big V8 - besides, those are slower! The instant acceleration never gets old, and I still smile every time I drive it. They are out of my price range, but now I want a Plaid just as badly as I ever wanted a Stingray.

I am totally sold on hatchbacks. 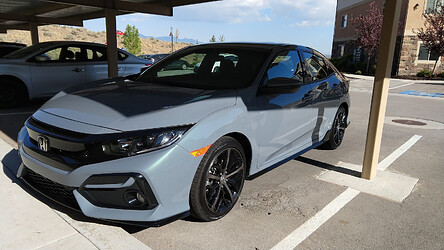 If we’re confessing stuff now, I only want to drive muscle cars now.

I daily a 600HP Camaro and it’s awesome.

And by “daily” I mean it’s my primary vehicle but even pre-COVID I only had to fill up about once a month.

I gave serious thought to buying something with a ton of power, but ultimately I really just wanted a car that wouldn’t cost me a fortune to run (now with $5 gas in California, I’m very glad to not have to feed that 15mpg Hemi) and bought the Accord.

Sure, I’m doing it on the cheap, though, with a 95 Mercury Cougar we paid like $2K for a few years ago. It’s easy to work on and there’s tons of parts available for it, so I’ve been trying to take good care of it as a “modern classic”. There are lots of ways to upgrade it down the road if I really want more ponies, too. People do PI swaps, add superchargers and drag race these things after all.

Looking to buy a new car myself. We currently have a 2013 Ford Escape (bought new) and it’s been a good car. Unfortunately something has died inside the dash and it would cost several thousand at least for Ford to tear into the dash to find the body. It stinks like death now.

We’re looking for something a little bigger so I’ve been looking into the Edge, which is their next size up from the Escape. I thought they’d cost more but Edmunds is telling me the 2020 model can be had for about 35K.

Any recommendations for other mid-size SUVs to consider? TIA

Well I have the Outback, we got the midsize trim pack for $32k.

Isn’t the Outback considerably smaller? I always thought it was. Regardless, I’ll look into it. Thanks.

My good lady has a 2008 Civic that she bought at 4 years old. I had a 2007 Civic some years ago. The things are pretty indestructible mechanically. It’s had a replacement wiper motor and a some replacement parts on the front passenger suspension (due to the roads we drive on around us) other than that it’s been rock solid. Like all Honda’s you pay more if things do go wrong but as a daily runner it’s pretty unbeatable. The boot space is incredible as well for it’s size even without the back seats down.

Also those Civics have a chain cam not a belt so no replacement cam belt at 65-ishk miles. There are a still a ton of them running around on our roads here in the UK which is my usual guide for what lasts over here.