I found Captain Forever, by Farbs via 2d-boy. Because I’m a sucker for indie space games, I brought it.

Basically you play as a spaceship in a universe where 50% of the enemies are trying to kill you (the other 50% ignore you and drive around doing nothing), and you have to kill them first. Do you remember Flow? Like that, but less nice hand holding, and in space.

There are three building blocks: engine, block and gun:

You use these to construct your ship (drag & drop)

And then you kill stuff:

After a few kills:

But there’s always something that will beat the crap out of you:

The tech is somewhat interesting. In case you haven’t figured it out yet, it’s a flash game.
There’s basic physics (mass, velocity, and simple thrust), which fit together well and doesn’t do anything too silly.
AI ships are randomly built, but always seem reasonably sane. You see everything from fat trading blobs to bird-of-prey assault ships.
If you have a webcam if overlays a low res super-dull ‘reflection’ which is unique (and an annoying gimmick the second time onwards).

It’s pretty unfinished now: the AI does nothing but fly towards you and kill you (some of them ignore you though (but if an enemy ship is shot by another enemy they attack you, which is mean!)), not many features and pretty grindy after the first 10 minutes or so, but there’s definite promise. Like Ron, I have spent a happy few hours flying around amassing laser batteries and thruster grids.

VERDICT: You should buy this game to increase the chances my US$15 was not wasted. If you’re a day trader you could consider this purchase an ‘investment’, otherwise the miniscule savings you get purchasing pre-launch shouldn’t be a rational temptation at all. But did I mention this is an indie space game?

So you cant play the game, there is no demo, there is no gameplay video, and he wants 15$, is that right or did i miss something ?

You missed the part where the game’s programmer yells “HA HA!” at you.

Looks neat. The ship modules remind me of the ones in in Galaxy Trucker:

So you cant play the game, there is no demo, there is no gameplay video, and he wants 15$, is that right or did i miss something ?

It’s sure playable, it’s just that what you get is more like “flash game” than “game”. It’s on the level of what is given for free on Kongregate for ad dollars. Here’s hoping that changes!

It was the presentation that pulled me in. That and the ASCII ship export ability.

I’m kinda impressed by the physics. You can build a totally lopsided ship, but if you balance the other side with heavier modules and place thrusters logically, it’ll still work. I made a ship that makes me think of the Minmatar because I had 3 unequal thrusters and an assortment of light and heavy boxes.

Yeah, me too! To me the concept was so well executed that I gladly paid the 15 bucks.

As a game it’s a bit sparse but I love how the progression mechanic and the “ship building” are integrated together. He could do alot with that.

RPS is offering half off of Blurst’s 4-game pack (Velociraptor Safari, Blush, Time Donkey and Crane Wars), bringing the price down to a ridiculous 10 bucks.

These are downloadable, full-screen versions, too.

I’d just like to say that I spent a ridiculous amount of time with this so far, and am a bit surprised at the lack of uptake at QT3. Yeah, it’s in Flash, but it’s got more things going for it than, say, any of Blurst’s (of Velociraptor Safari fame) offerings. I mean, it’s like Nethack + EVE! Sort of. :P

If you have any sweet ship designs, feel free to upload them here (one of my cow orkers made this). Kinda like Gratuitous Ship Battles’ challenges, this lets you see how far you could get with someone else’s ship design - but it also lets you build on the existing scaffolding. The 3 most recent uploads (27,28,29) are mine. I call the most recent one … the scooper ^_^ Great for hit 'n run!

It was the presentation that pulled me in. That and the ASCII ship export ability.

I’m kinda impressed by the physics. You can build a totally lopsided ship, but if you balance the other side with heavier modules and place thrusters logically, it’ll still work. I made a ship that makes me think of the Minmatar because I had 3 unequal thrusters and an assortment of light and heavy boxes.

Why would having a lopsided ship matter in space?

Why would having a lopsided ship matter in space?

Because oddly enough, mass is mass. ;)

This is now free, with Capt. Successor, the sequel, open to subscribers.

Jesus fuck CS is hard. I can’t get anything bigger than a 5 unit charlie level ship. Anyone had more luck?

Very much enjoying it so far. Challenging, too.

The feature I like most about it is that I can reconfigure my entire ship’s shape and turret-positioning in real time mid-combat!
I can run from an enemy, reattached my turrets backwards, and lob fire.

This is rather awesome. The retro style of menu and so on is really nice touch (may even be obligatory given limited production resources, but still nice).

Captain’s Log, supplemental: it has a hostility meter for the different factions (block colour) and your reputation with them. Blow more of X ships, get in trouble with X.
And another strategic aspect is that weapons of certain colours can shoot through blocks of certain colours, but their shots will impact against blocks of different colours.
So you can’t just mount any weapon you want anywhere you want facing any direction you want. You need to think it through.

Damn, this game is hard!

is there any way to heal yourself?

The most problem I’ve found is that it’s very hard to find a corner of space to sit in and reconfigure yourself. There’s hardly any leisure time. Vastly lacking/requiring a Safe Haven Depot.

I really love the physics, though.
Having to work a ship design that actually WORKS, can’t just toss thrusters everywhere, guns everywhere and then pray to god.
And how every brick has its own HP, mass and power.

I really wish this was client based with saveable positions et cetera.
It’d be a lot of fun Online vs others.

At any rate,
I’ve put together with my 1337 MS paintbrush skills a little composite of my last couple hours in the game.
My advice: If you meet any golf or hotel guys, turn tail and GET THE HELL OUTTA OF THERE! 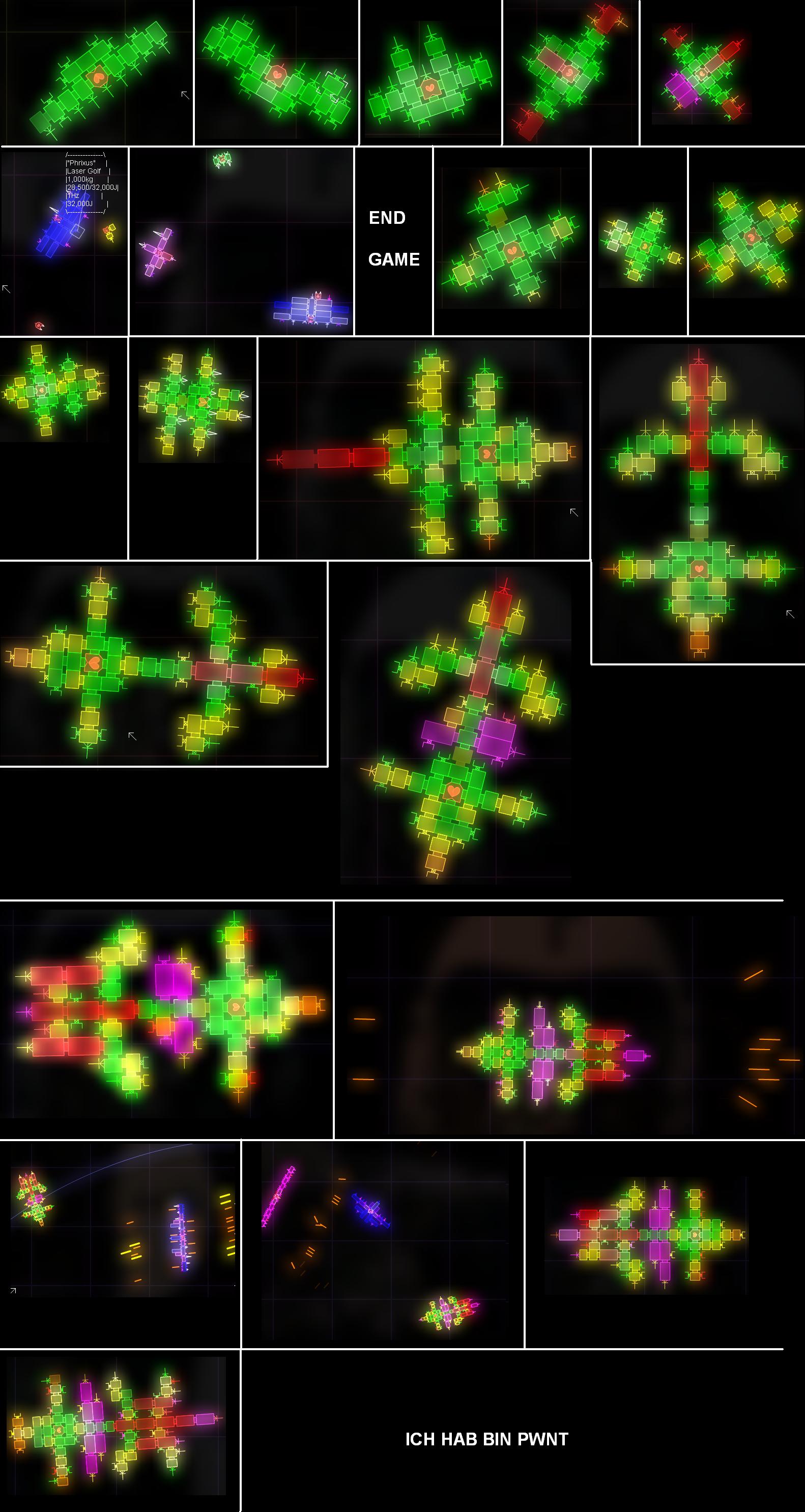 Managed to maneuver two blue golf/foxtrot guys to shoot each other off, snagged a blue laser out of one of them and put it on top of my ship. Then managed to find a ship a minute later which was constructed in such a manner, it had very little propulsion and maneuverability, it also had its core between wings in a very exposed place.
So I maneuvered in, immobilized it, and blasted it in the soft-spot to bits.

You can actually still see how it was structured.
Unfortunately, my new-found ship lasted about the whole of one minute and twenty seconds, as I did not have time to properly complete the design, lacked severely on thrusters, could not maneuver out of danger and all the hard work went to hell.

But hey, I made it to India difficulty level! (and boy, did it sure hurt!)
I died in a very funny manner. My ship got blown up, I was reduced to one blue laser and one blue thruster, with my heart-core in the middle.
Just as I begun sprinting at REALLY HIGH SONIC VELOCITY (it went ZOOM) I had the misfortune of crossing paths with an india laser, and that was the last of it. 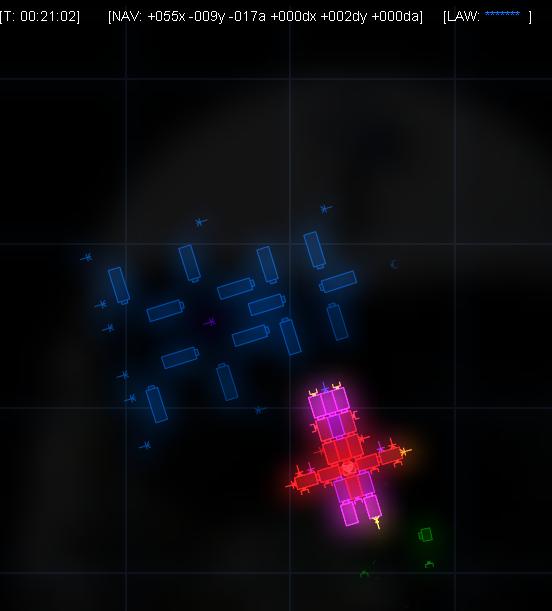 This seems to be free now. I’m assembling a foxtrot level ship, avoiding putting any golf or hotel parts on, because I’m pretty sure that’s what increases the difficulty.

Maybe it does too…but what I know for certain is that if ANY ship above your level dies (by your hands or by fire from other ships) then the difficulty is revved up.