Caves of Qud - "Swap stories with an albino ape mayor"

Ya-shwouun continued his journey following rumors to a wooden fort filled with dogmen. He slowly and methodically picked them off. He grabbed a heavy two handed sword from a corpse and used it to hack at the wooden walls, carving a way in through a section weakened with an arrow-slit. Inside he made quick work of the chieftain Ugo-ugoaz and claimed a desert battle-rifle as spoils. Now the fort was empty and he searched it carefully. The rumors were true - behold the Hallowed Thermal Grenade! Ya-shwouun started to dream about the stories the village would tell about him. He decided to explore a bit further. To the west was another tribe of dogmen. He lured them back to the fort, making use of its defenses to aid him. His force-bubble combined with the desert rifle was more than enough to overcome the pack and this second chieftan, Ofowofofo. Peeking west he saw a short creature with a mask of plants. It was weak, but for some reason it was called “psychic thrall”. What does that mean? From around a clump of trees came a tall figure in robes, flanked by a few metallic crabs and more of these jungle hiders. A Servant of Ptoh? “Qtep I-Mut-No-Longer burrows a channel through the psychic aether and begins to sunder your mind.” What?? “Qtep I-Mut-No-Longer sunders your mind (x5) for 26 damage!” Auuuugh, Ya-shwouun must flee!! Put up a protection field [that only helps vs physical attacks]!! “Qtep I-Mut-No-Longer sunders your mind (x4) for 21 damage!” Ya-shwouun’s corpse dropped limply to the ground. It ended there. He had not been back to the village to turn in the quest for the grenade. No one would tell stories about him.

So how do the daily challenge rules work? What happens if my daily challenge character doesn’t die until tomorrow or the day after? If the leaderboard resets every day then his score is wasted in that case?

The reason it occurred to me to wonder about this is my character for today is thriving. He’s a level 9 gunslinger with horns, a stinger and electrical discharge. I also used 4 mutation points to grow him another head. He’s finished the quests in the starting town and is now headed for Grit Gate and the quests there. I never imagined that the electrical discharge mutation was so good. Will use again in future.

Welp, that’s that. Died at level 10. At least I made it to first place on the leaderboard (barely). Slugsnouts are brutal and I hate them. I never did see it and even if I did, I was out of lead slugs for my pistols. 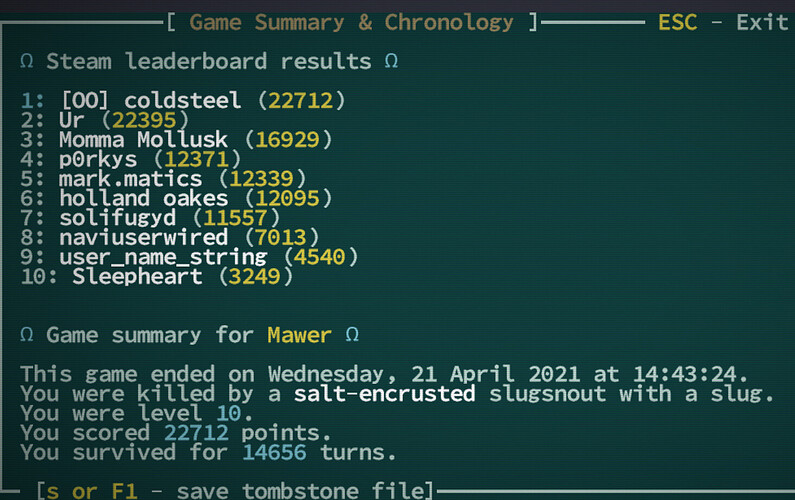 Your score will be recorded on the correct daily (or weekly) challenge date for that seed, even if it’s after that day or week.

What’s funny is I expected a gunslinger with those starting stats and skills to die really fast but he turned out to be pretty dang solid. I like the daily and weekly challenges because it forces me to try stuff I never would, normally.

Below are the starting character stats and mutations for the character I’m currently playing. I just love axes and had an idea for an ultimate Axe Marauder build with two heads. I wanted to create an all-rounder with potential to boost ego up really high eventually and pick up a nice esper talent later to take advantage of it if I got lucky.

The idea with the two heads is that plus the 2-faces item mods gives me 4 faces to stack ego items on. That plus 2 gnollworm helmets allows for some serious ego boosting. Axes plus dismember fits right into this strategy, and indeed, I collected a bunch of severed faces to wear in no time. I went with Phasing because I wanted a way to get into places like Grit Gate and get around blockages. I could have picked Teleport instead but it also needs Clairvoyance to be useful and that combo cost too much for this guy.

I wanted something that wasn’t weak in any area. Agility and Toughness are important for a dual wield axe melee so I picked Triple Jointed and Two Hearted to boost those.

Now at level 20, below is how it’s all starting to come together.

I waited quite a while to use 4 mutation points to buy a new mutation. My choices were Slime Glands, Space-Time Vortex and Sunder Mind. Space-Time Vortex tempted me a bit because you can use it to explore some crazy places and get insane gear early but Sunder Mind easily won because I needed more ranged damage and it synergizes really well with phasing and the damage scales with levels. I can cast it then phase out and the target can’t touch me unless they also have phasing or some other items to negate it. With the +5 ego bonus it’s already doing great damage. You can also attack phased enemies with it.

I have Tinker I and managed to find the two-faces mod this morning. I used it to add two new faces to my Gnollworm helmets. I now have +1 ego faces on 3 of my faces and nightvision goggles with a nav mod on the other one. So even with only +1 ego faces I still get a nice +5 boost. With +3 faces later, that bonus will increase even more.

I got lucky and found some Putus Templar under a beginner historical site. granted, they nearly killed me but I prevailed and when I killed their head honcho he dropped two nectar injectors which I turned into some nice attribute boosts.

I also just got lucky with books. I was level 18 but just cleared a historical site named the ‘Miozotara Scroll Quadrangle’. I figured with a name like that, it might have books. Boy, did it ever. I came out of there with 96 books that sent me from level 18 to almost level 21. All guarded by only a bunch of weak bears. I really do love this game. 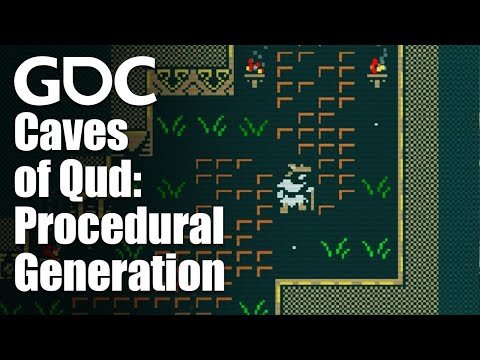 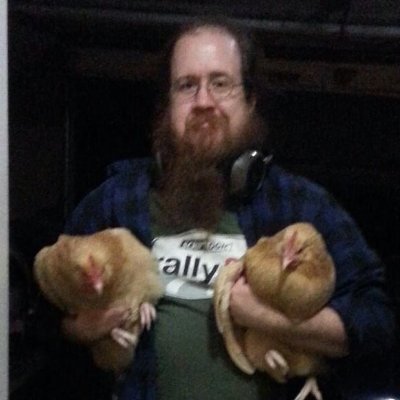 This will be a funny tweet to bookmark for 2031 when it’s still in EA. 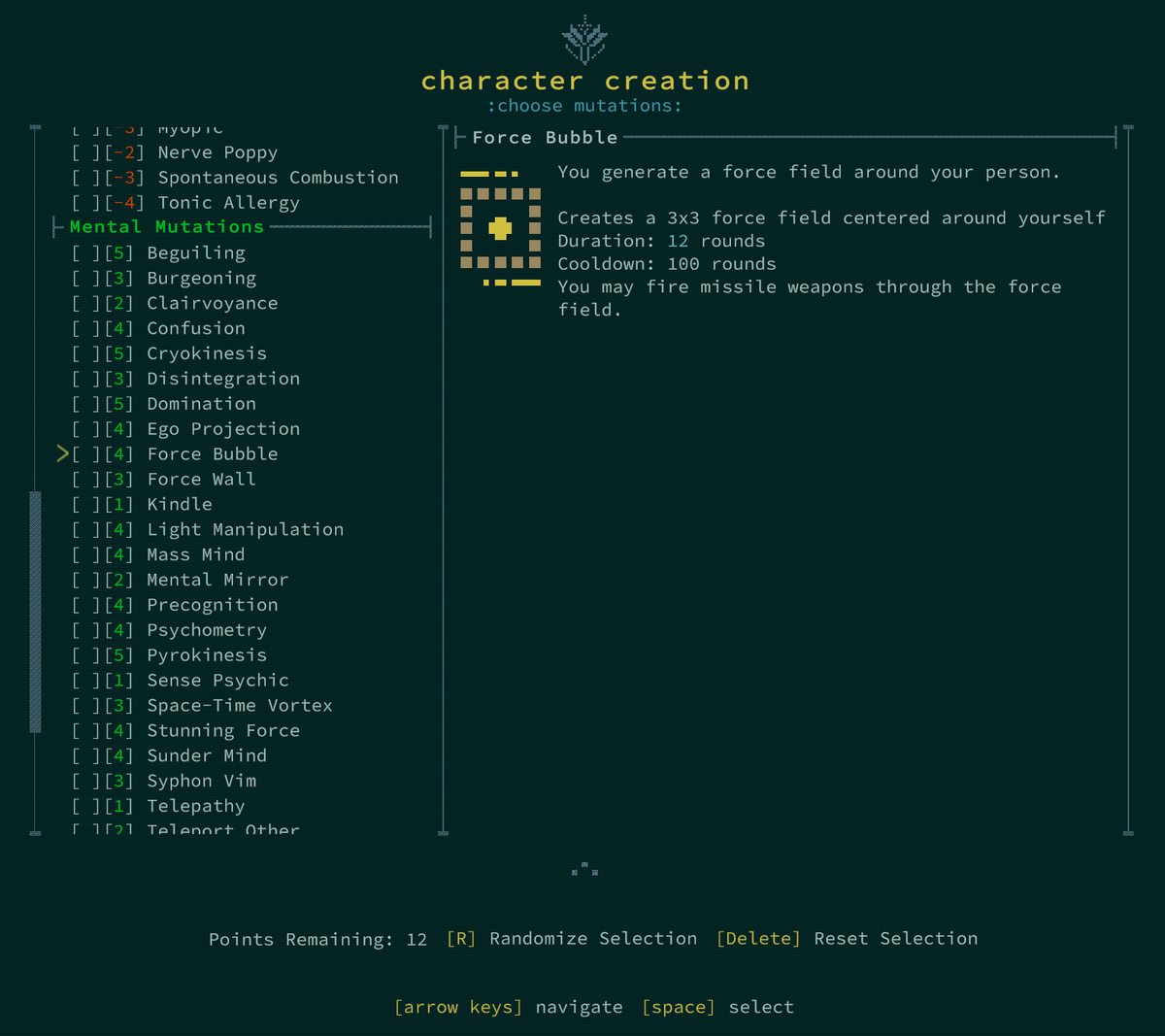 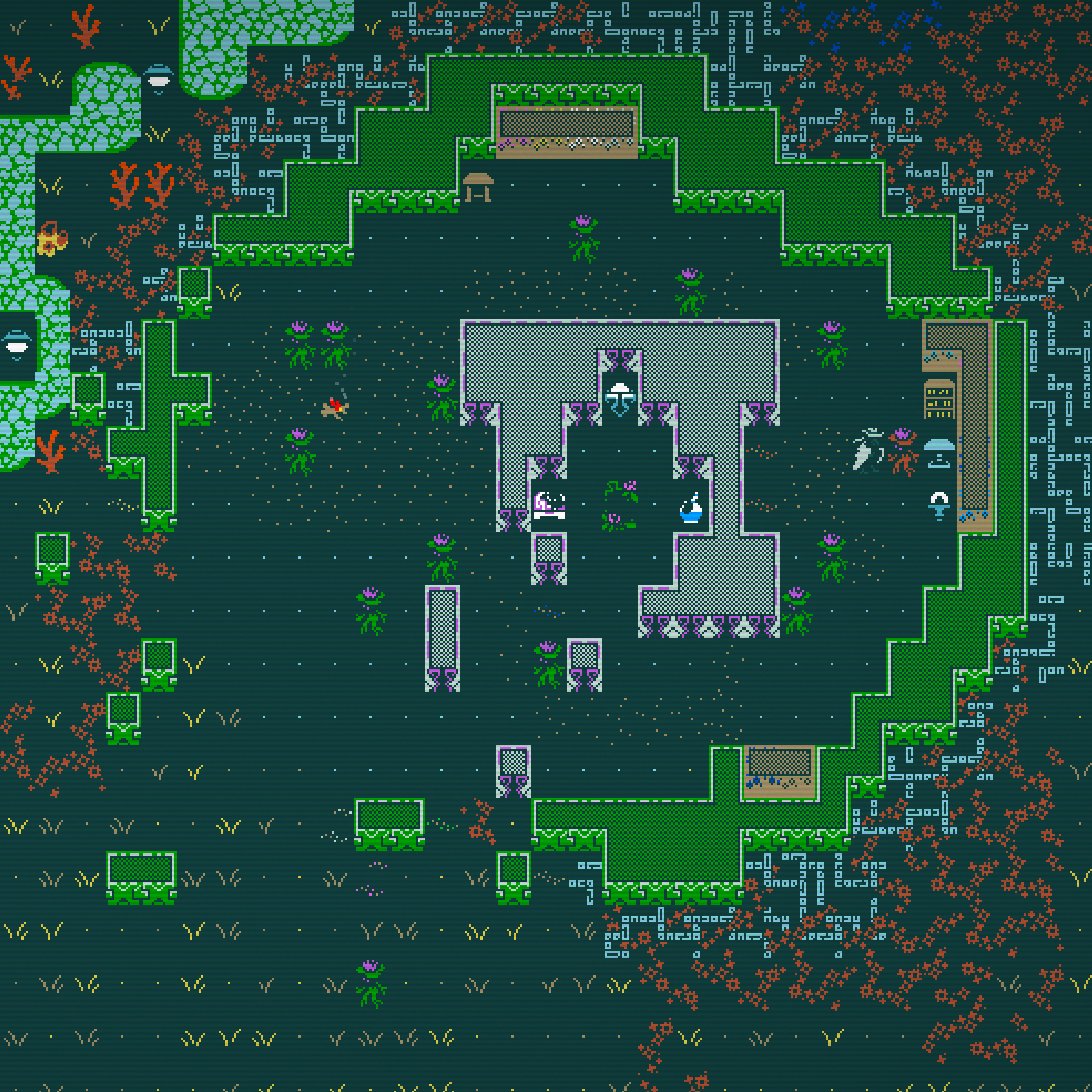 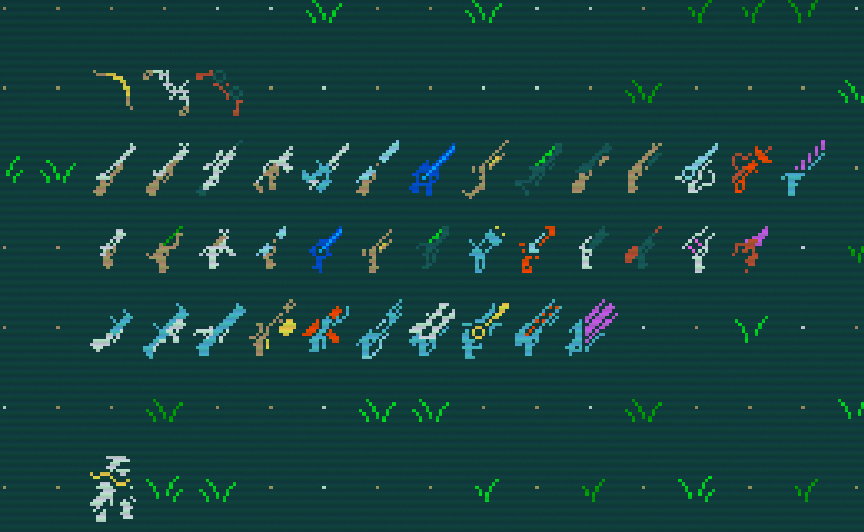 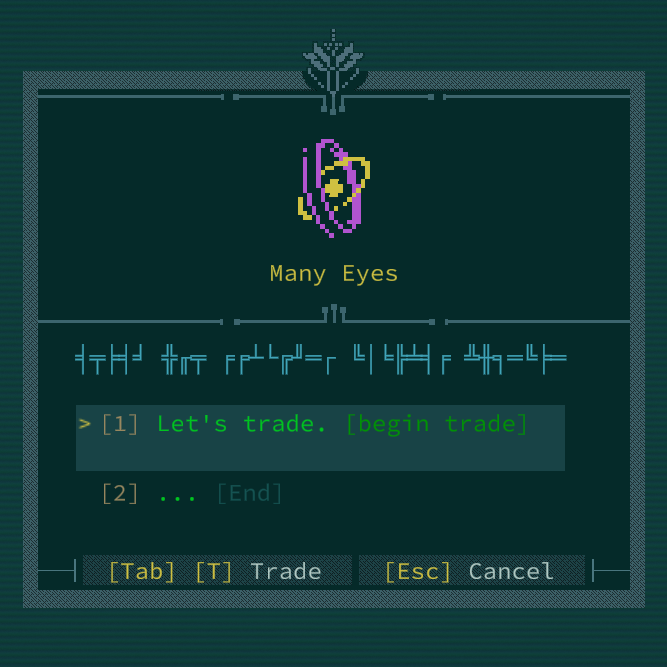 Aha, I remember that review being posted here. I just read this interesting article about the developers’ moderation/vetting of their Discord community as a result of Sseth’s ‘ban speedrun’ aside:

Keeping trolls out of the Caves of Qud community

Those are some cool cucumbers. They have also given several interesting talks at Roguelike Celebration, including one just a few weeks ago: 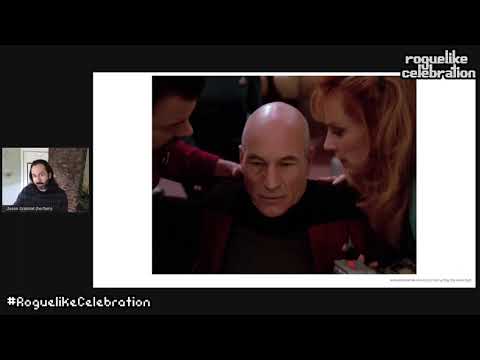 Almost every negative review of the game on Steam is about their discord, not the game. I’ve thought about getting this one many times over the years. Maybe this weekend is the time.

as a result of Sseth’s ‘ban speedrun’ aside

Wow I didn’t realise that Sseth was such a lowlife. I don’t follow him at all, but that review he did was really entertaining. Shame.

It must be really tough having to deal with big streams of people whose sole aim is to try and sink your product.

as a result of Sseth’s ‘ban speedrun’ aside

Wow I didn’t realise that Sseth was such a lowlife. I don’t follow him at all, but that review he did was really entertaining. Shame.

It must be really tough having to deal with big streams of people whose sole aim is to try and sink your product.

I mean, the issue are his fans, that are stupid enough to not know he was doing a bit, not him.

The issue is him, for talking to people, too.

I mean, the issue are his fans, that are stupid enough to not know he was doing a bit, not him.

By ‘lowlife’ I was mostly referring to the initial racial/homophobic incident that got him banned from the Qud discord server, was that whole thing a ‘bit’?

If so I guess the devs were stupid too! :)

If so I guess the devs were stupid too! :)

Not really, bit or not bit, he infringed the rules.

So the discord thing was a bit, just a really offensive/tasteless one or something? As was the call for his followers to also try get banned?

Won’t someone please tell me how I should feel about Sseth! :)

No he just didnt read the server rules and wanted to make a joke, but talked about something not allowed to be talked, as to avoid having a rush of weirdos - and oh boy, does this happen quickly on a discord who isnt carefully watched.
He should have read the server rules, his reviews are still entertaining, the people taking him seriously are still turds.
My pleasure!