We had a fire in our chimney tonight.

I started a nice warm fire in the fireplace as usual and then went into my office to play a few minutes of Dwarf Fortress while I waited for my wife to finish what she was doing so we could play UpWords.

When I went back to check the fire I could here an incredible “whooshing” sound in the fireplace.

I screamed to my wife to get the kids out of their beds and out of the house which she did while I looked outside. There were flames shooting out of the chimney.

I ran back inside as my wife was hustling the kids outside and I called 911.

“What township?” he asked.

I told him and he said they were sending the fire company.

I then rushed and got my keys, iPhone, and wallet, then headed for our fire extinguisher and used it to put out the fire in the fireplace in hopes that it would somehow reduce the heat fueling the chimney fire.

Then I moved my car out of the garage and yelled for my wife to get the van out. I then ran back inside and turned out an outdoor hose valve to see if I could try to train a hose upwards or something.

The hose was frozen though so I gave up. A passing motorist had gotten out of his car and gave everything the once over. “It will be fine…they’ll have that out in no time,” he said as he headed off.

The fire company arrived about two minutes later. I was pretty surprised. They immediately got to work and first a second, then a third, then a fourth fire truck arrived.

There were firemen everywhere, pulling out hoses, putting up ladders, going into the house, coming out of the house. It was a mob scene of three fire companies.

There was a lot of me walking back and forth, asking if things were going to be ok, talking to the neighbors, explaining the obvious, getting offers of a spare bedroom, etc.

Finally, the fire marshall brought me inside explained that they had run some chains down the chimney to knock loose any potential debris that could be in there, determined that there wasn’t, then shot some extinguising agent up the chimney, and that was why there’s a fine coating of dust over our entire living room.

Here’s the moral of the story.

Get your fireplace inspected/cleaned every year. You can’t let it go. We had it inspected about two/three years ago by a chimney sweep and he said, you don’t need to get it looked at again for another couple of years and I listened to that advice. Don’t make the same mistake.

We’re back in the house, everything is fine. The kids are asleep in their beds, and the only effect is that the living room looks like it’s been left undisturbed for 100 years with dust covering everything.

What I really want to know is why the 911 operator kept telling me to stay on the line. :)

Because panicky people tend to run off without telling the operator their address.

Also, Renaissance literature would have been key here! Anyone who had read The Changeling would have immediately thought of De Flores and his use of gunfire in cleaning out a burning chimney.

Sounds like an exciting but harmless night, so yay!

Jesus – glad nothing really awful came of that. As someone who flooded his basement last year because he was too damned stupid to detach his hose from the side of his house and had a pipe crack, all I can say is don’t forget to do that or you may have a bigger problem when the weather warms up.

A basement pool is not a problem. It is an opportunity for party-party!

What you should have done is build a windmill on your roof ahead of time, then dig a shaft down to the aquifer with room for staggered pumps on every level. Then when the fire started you could place a gear assembly under the windmill to get the pumps working. This way you don’t have to train up your kids as pump operators.

Wow. My whining about the cold weather will now end, I love using our fireplace (gas logs now, but for years wood burning), and I worry a lot about what happened to you tonight. Steve Jobs would be proud to note that after you secured the family, the iPhone was high on the list of items to be rescued.

Good, quick action on your part. Got your family out, called the department, and even extinguished the fireplace which was providing energy for the fire.

Yeah, you did everything right (apart from letting your chimney go like that).
Our neighbour when I was a kid did this… on purpose. To clean out the chimney he said… it works, but it’s fucking dangerous and we lived 30 minutes from the nearest firestation (there was a volunteer fireengine in town, but still).

Over here everybody has a stove/fireplace and it’s required by law to have it sweeped once a year.

There’s two things you can do to prevent this in the future. The first is a must.

Get the chimney sweeped once a year. Allthough the chimney even in an old house is fireproof and somewhat insulated a fire can spread down or to the roof (shoudln’t get hot enough to spred sidewards, but if it’s badly insulated and there’s flamable stuff leaning on the chimney somewhere…).
Another reason for a yearly sweep is debris. An entire family (two kids and their grandparents) were killed here last year, because birds had nested in a seldomly used chimney and CO2 spread downwards instead.

Get an insert. With a modern convection insert the fire in the fireplace (which is now really a closed stove) will burn much hotter (if you use the right dried wood) there should be no flamable material building up in the chimney - as a bonus your house will be warmer and you’ll use less firwood.

I always heard that if you use those Duraflame logs you were less likely to get the build-up that can lead to a chimney fire. Is that wrong?

It might make some difference because it’s a consistent product and always properly dried. But note that Duraflames very first safety tip is to have your fireplace inspected regularly, so they know that using their product isn’t a guarantee.

there are some cleaning logs similar to duraflame that can reduce the debris when used occasiuonally as well.

we just use ecologs most of the time. Bought em as starters but they burn longer than we usually want a fire for so I quit bothering with wood.

Wow, quick thinking and calm reaction on your part save the day. Glad to hear everyone and everything is alright this morning.

I used to worry about the chimney in our old house all the time. Our new house has only a gas fireplace with a vent to the outside (no wood to burn means no residue to build up), but now I’ve exchanged worries about chimney fires for worries about blocked vents and gas leaks.

I do leave the pilot light in the fireplace burning year round. It’s probably stupid of me to do so, but it gives me a peace of mind to see the little flame and know that the gas is being burned up, not escaping into my house to kill me in my sleep.

We rarely used the chimney in our old house, but one of the move-in tasks/expenses was getting a couple of “hat” covers for it. It had two openings on top - I guess one for the basement fireplace, one for the builtin porch bbq.

These were easy to find at Home Depot, simple black metal things that clip on, providing a solid cover above and a metal grill around. This was primarily to keep critters out, but also helps with leaves and any other debris. They fasten with switches that just tighten them, so easy to remove too for other chimney maintenance if you need to get in from the top.

Having just bought a house with a fireplace, I’ve been looking into the inserts. On paper, they seem like an extremely smart move. Do they really work as well as advertised compared to a regular fireplace?

Great necro! Though everyone knows that the main cause of chimney obstruction is fat Santa getting his arse stuck.

I’ll never understand the perceived value in creating a random account to post an ad on a … forum of all places. WTF. Bots, I assume, but who is paying for these bots? Are they actually turning a profit from their implementation?

@ericsimon16 if you aren’t a bot, my apologies, but you’re still a fool who doesn’t understand how to market a product.

It’s a bot. The link in the post is the tip-off. Flagged for disposal.

All these bot thread necroes of ancient QT3 house maintenance threads have been helpful since we just bought a house. The biggest remaining issue is fixing the fireplaces. They came with inserts, which I’m actually not a fan of, but I could be convinced. I prefer an open fireplace for the cozy aesthetic, and I never had a problem in the house we’re coming from… but the title post gives me pause!

At this point, we’re probably going to keep the inserts unless they’re more expensive to repair than remove, but aside from heat efficiency, which I really don’t care about (except on those few days of the year the home generator thread also covers), are there any good reasons to prefer them? They would need to outweigh the aesthetic of a larger fire, because right now it’s like downgrading TV sizes.

Also, one of our cats loves fires, so she is the primary beneficiary. 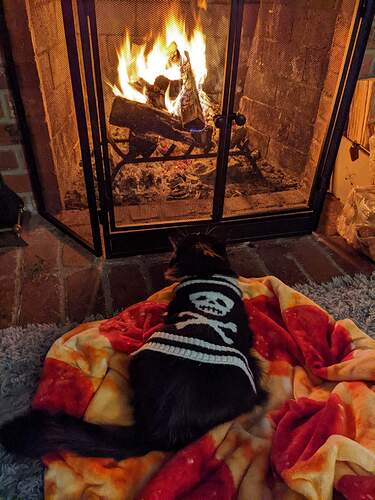 I didn’t see the dates until I had read thru this but contrary to what someone upthead said you should still get fireplace inserts cleaned.

And if you burn a lot get it cleaned every year.