Cimmerian Space BETA Test for Free, the 1st 1000 players even get rewards!

Yes, in the absence of real garlic, of course. Most steel-oven corner pizzerias in the northeast have a shaker of stale garlic powder available, but apparently the joy stops in delaware or something…

In upstate NY it was always red pepper flakes and Parmesan cheese on the table. I don’t think I’ve eaten in at a pizza place here in MD. Will have to take a look next time I hit up the new Italian place we get take out from.

The game itself looks very nice. I clicked through and watched the game footage video on the developers website, and it’s a very pretty space fighting/trading/ game that I would probably be interested in at least trying out if it was F2P stand-alone like Galaxy on Fire HD.

However, the fact that it ties back to Facebook is an instant “game over” for me. I get enough Candy Crush Saga spam (and before that it was Farmville and Mafia Wars spam) from my Facebook friends already. I do not want to be the one spamming their walls with tacky images of scantily clad space girls begging them to “play now m’lord!” and bragging about how I just earned 10,000 cuberoids for taking back the planet Tribble from the evil Shatt’Nar Empire.

That said, that’s just my personal opinion. The game obviously looks like the developers have put a lot of time and effort into it, and I wish them much success. I would sack the marketing folks though for suggesting the terrible live models for the advertising, as they repel far more serious gamers than they will attract. Needless sexism in games is a hot-button issue these days, new developers would do well to tread carefully.

I have never seen nor heard of this. Garlic powder? On Pizza?

An East Coast thing, in my experience. Only one place in Dallas puts out a garlic shaker, but it was common in DC.

Yep, pizza joints here in NYC all have garlic powder, red pepper flake, and oregano shakers on the counter.

You have chosen… wisely.

Why is the model holding a (pizza slicing) gun if the game is entirely set in spaceships?

Cheese pizza without red pepper flakes, garlic powder, and oregano is like a hamburger without cheese - good, but missing that extra something special to make it great.

Pizza’s the best. Let’s just talk more about pizza instead of this dumb game. What’s the craziest but surprisingly delicious topping people have had on their pizza?

I think if you feel the need to dump a bunch of garlic powder and parmesan and oregano on your pie, it must not be very good, flavor-wise. I do enjoy a good onion and fresh garlic pizza now and again, though. Recommended.

Not so crazy, but my favorite pizza is the brussel sprout, pancetta, and fior de latte pizza at Motorino in NYC. 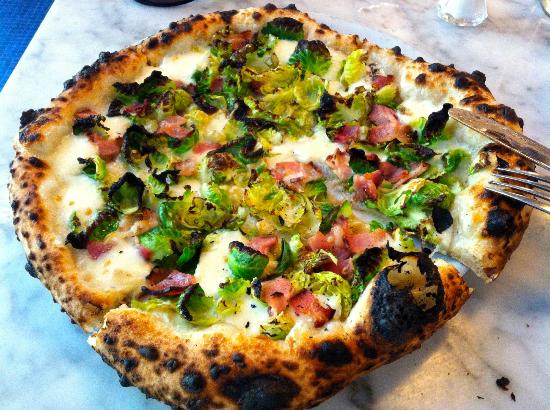 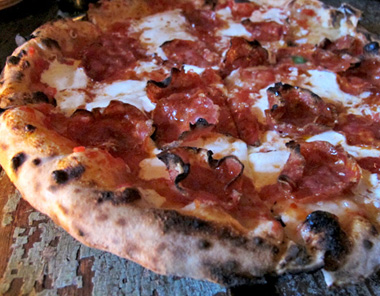 Neither one is a NYC-style pizza, they are both neapolitana.

LA isn’t so bad. You can’t find good NY style pizza on every corner like here, but 800 Degrees and Mother Dough are pretty good neapolitan choices and Vito’s is respectable NY style. Or at least they were good the last time I was in LA, which was 2 years ago.

Don’t get me wrong, none of the above compare to the best choices in NYC. But they’re much better than the average you’ll find here.

Neither one is a NYC-style pizza, they are both neapolitana.

Foodies ruin food for everyone.

I don’t see how classifying different types of food takes the fun out of it.

That said, that’s just my personal opinion. The game obviously looks like the developers have put a lot of time and effort into it, and I wish them much success. I would sack the marketing folks though for suggesting the terrible live models for the advertising, as they repel far more serious gamers than they will attract. Needless sexism in games is a hot-button issue these days, new developers would do well to tread carefully.

With a significant amount of nipple-age in those promo photos on the site, I think someone in marketing is thinking “boobs sell games, amirite?” What they are likely to learn is no, no they don’t. Not in the States at least. Not sure how the rest of the world will respond though.

But, in general, using live models for games is weird… right? I mean, I’ve never responded to it at least.

I don’t see how classifying different types of food takes the fun out of it.

Oh, come on. Your ingredient descriptions are the foodie equivalent of brandishing your e-peen in an online game. Subtext: stusser owns. : P

Those pizzas look great!
NOt sure about the knife + fork though.

NOt sure about the knife + fork though.

SON OF A BITCH! Didn’t even NOTICE that. Motherfucker. No. Just. No.

Jon Stewart mirrors how I feel about such an…issue… Neapolitan pizza is traditionally eaten with a knife and fork. NY style is picked up and folded.

Of course New York pizza used to be made mostly by Neapolitan immigrants. The “sicilian slice” option you hardly ever see anymore was presumably a nod to the people who loaned them money and sold them their pizza ovens and protected them from bad things happening.

Yes, but it substantially evolved since then. NY style pizza is as italian-american as spaghetti and meatballs or a chicken parm sub. It’s much larger, thinner, with a thinner but more substantial and well-done crust, light brown color, and was traditionally cooked in a coal-burning oven. Cheese is polly-o part-skim mozzarella. Most are cooked in gas-fired steel pizza ovens today, particularly in NYC as coal ovens are illegal unless you’re grandfathered from 100 years ago.

Neapolitan pizzas are much smaller, with a light puffy crust, very soft middle with pools of cheese and oil, and tons of scorched bubble bits, cooked in a wood-burning oven. Cheese is fresh soft fior di latte or buffalo.

I make pizza on my gas grill, using fresh dough. Its awesome, except when I burn it.