Don’t upgrade too soon because you can’t go back without a cost!

I agree! I got caught in the same predicament and solved it by building a 2nd workshop and now I build 2 workshops every time. It allows me to go faster.

I think what you’re alluding to is that upgrading has so many prerequisites - when going to level 2, you need apples and a cider press so I’ve learned not to even start until I have both of those operational and producing cider.

I’m in the middle of scenario 5 where you upgrade to level 3, and it’s much more involved. I need wheat, flour, bread, paper and binding so you can imagine my level 3 workshop has been idle for some time while I try to get all these other things up & running. The good news is I still have a level 2 workshop running since I run with 2 all the time.

Layout space is very tight right now and I haven’t even begun to build any of the level 3 buildings.

It is kind of charming to play - there is a bit of tension when you do your first battle and learn how important and crucial the placement of watchtowers are.

I am impressed to see the dev is still improving/updating the game.

They really are doing a bang up job in continuing to support it.

I really enjoyed my time with The Colonists. I’ve been meaning to jump back in to see the changes.

Robots who can self-replicate, but built with wood and live in huts?

And need meat and water to survive in those huts.

I need to get back to this someday. I forget which scenario I was on, but I got deep into the weeds of trying to get the land leveled in a way that would accommodate my plan and drifted off after several restarts.

I’d also like an alternative to watchtowers. They harsh my aesthetic.

Humanity built robots that appreciate the aesthetics of simplicity and coziness and traditional living, but they wanted them to work all the time and live in sleek corridors and boxy buildings. So the robots left to pursue coziness.

Well put. And that’s a message/an idea I think is in the game.

On mission 5, I thought I knew all the prerequisites for Level 3, but man did it jamsackle me with all the cascading needs / research areas.

I still did OK I think, but I think with a replay I could knock a few more months off this 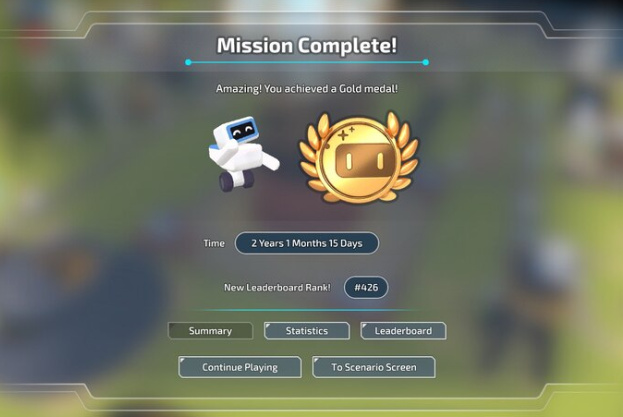 This is neat! Only on the second mission which is still pretty tutorial, but I am setting me up some production chains, let me tell you what.

I’ve started to have a lot of issues where buildings are idle, with all the resources they need but nothing is happening; lumberjacks who are idle because they are missing power and there is a house nearby with energy that isn’t doing anything because “export is full” so it thinks that nothing needs it.

I can exit / restart and it helps sometimes. In one case, I had a shipbuilder who had all the planks but wouldn’t apply any - even with quit / restart. I had to resort to a previous save, and it didn’t happen again.

Anyone else having these issues?

I had my city nearly lock up, and noticed the road bots carrying a good in one direction, then picking up another of the same good and carrying it back in the other direction–which seems like an error. Not sure if it really was broken, though, or if I just had bad supply chains…

Yes that happens a lot, particularly with storage areas so I’ve been using the whitelist on storage areas to direct them to where I want them - I like to use small storage areas as a pre-stage for building something. So you can start to build something - put it on pause, then set the rules for the storage area only to deliver to that building.

BTW - on my bug reporting, the developer responded and is asking for files so that’s positve!

Looking into the colonists I read the reviews on Steam and one of the negative reviews mentioned this specific factor – that they had robots traveling to a different island to get supplies that were in a warehouse right next to where they were needed. So I think this seems like a long-standing issue. Hopefully the dev will be able to quash this bug because aside from that (maybe even in spite of that) the game seems pretty well received.

I had my city nearly lock up, and noticed the road bots carrying a good in one direction, then picking up another of the same good and carrying it back in the other direction–which seems like an error.

It’s not an error so much as a function of game logic that can be quite counterintuitive. When a building looks for a good it needs, if it can find one, it orders it and locks in the delivery. Even if something closer becomes available in the meantime, the initially ordered item will be prioritised and the closer one ignored. If you want to avoid outcomes like this, you need to be quite strict about the blacklist/whitelist rules and as tman says use lots of intermediate storage facilities.

Getting better. This game rocks. 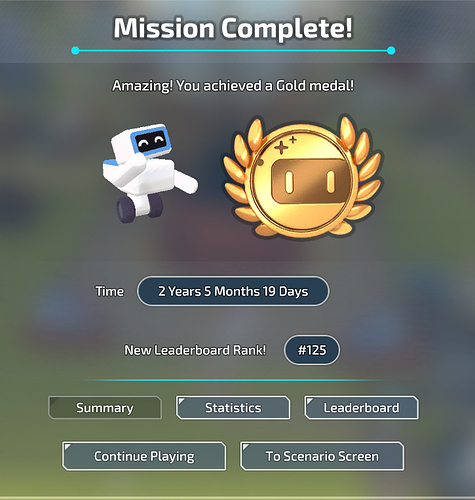 Gameplay is crystal clear and really well done. Are you thinking that end of game summary screen I posted looks garbled or did you see gameplay elsewhere?

On their steam page I went through their screenshots and it just looked like the graphics would be hard to get used to if they presented exactly as seen.

Ah well now I went and looked and I can see how that may look fuzzy but I can tell you that I’m really super impressed with how the game presents information at a wide variety of zooms and I’m routinely going between super zoomed in when I’m trying to place something just right and then zooming out and panning around to check on how things are going.

It’s a very whimsical game. The campaign is ingeniously structured to get more difficult and alternates between solo play and against other robots. I just finished #7 and there are 14 missions. As you increase in the campaigns, they get longer and longer as they get larger areas, more techs, etc. I feel I’ve been pretty focused and steam tells me I’ve been playing for 46 hours and by the campaign numbers, I’m half way.

The solo play maps are no pressure except for the gold/silver/bronze medals you get at the end depending upon how fast you complete the map. The first few maps I got silver but wasn’t too worried as I know I’m just learning the game and am looking foward to going back once I’m done to see how much faster I can go.

The battle maps are against 1 other robot colony so far. There may be campaign maps with > 1 but so far that’s all I’ve seen. Battle doesn’t work like in other games where you create troops and attack. Rather, you have these watchtowers that cover your area and their influence defines your boundary - so expansion is required in the beginning until your borders meet up. The AI is pretty aggressive and your early growth will define how long this game goes on. To do battle, you have to upgrade your towers and arm them with arrows, and then cannonballs, although I haven’t had to do cannonballs yet so I’m imagining that is in later campaigns.

This game is really more about routing and setting up efficient paths to/from all your producers/consumers. Deleting / reorganizing is pretty painless other than the resource hit for rebuilding, and for at least Campaign 7, required.