Yeah, I saw that. The MP5 was used close range with 9mm in Warzone, so it will still be the weapon of choice there. But it’s definitely a nerf in regular mp where the 10mm rounds was more used. Basically, in Warzone you want the larger magazine because of the armor and (outside solos) being able to engage more players at the same time.

But the snipers were buffed so maybe we’re back to the HDR/M4A1 combo. Not sure what would replace the Grau for longer automatic battles if you want to continue using an AR/SMG, but maybe the M13 since it’s still a laser.

Edit: on the other hand, I’m watching someone streaming now, and he says he can barely notice any recoil changes to the Grau. So I guess it depends how much the range damage has been nerfed. But it still seems to be extremely powerful.

To be fair, it’s nothing dramatic, but I just don’t understand why buff at all? I mean, I’d rather nerf the HDR since it’s basically a hit scan weapon, even at long ranges. So nailing headshots with it is super easy, and that makes the semi-automatic marksman rifles pretty much useless in comparison.

Any buff is gonna make me go ugh. See above in the thread where I express my firmly held opinion that every (multiplayer) game ever should have all sniper weapons removed, period.

Warzone knows what day it is. Tomorrow. 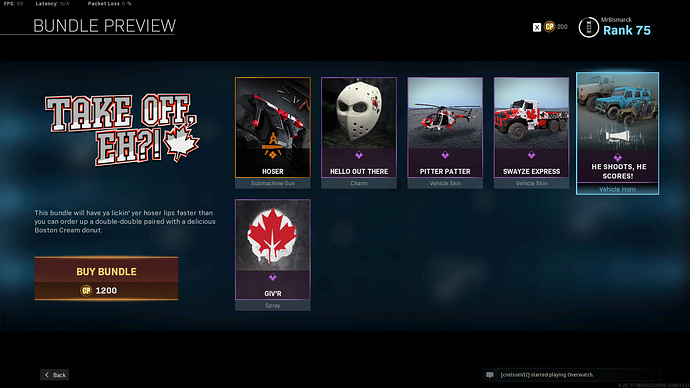 The vehicle horn is the hockey goal sound.

Should just be called Canaday. At first I thought it was like the fortieth anniversary of Strange Brew or something.

You guys goin’ out fer a rip?

Two things regarding the update.

One: I seem to be having issues mounting on some places now. Not sure that’s an intentional change.

Sadly, the so-called nerfs to the Grau/MP5 loadout look more and more like wet farts. Yeah, there’s a slight damage range reduction and slightly more recoil, but in practice you don’t really notice it.

Man, the shaders thing is just the worst.

Man, they put snipers in gulag? What a dumb idea. I didn’t get anything else the three times I was put in there.

No idea why their game has to do that repeatedly. I’ve never played any other game which does that.

They even did something more stupid, sometimes you only have your fists and a throwing knife. So the Gulag is absolute shit right now.

Is it the shaders thing that make the menu screens so incredible laggy? It’s definitely pretty annoying.

Actually I think the fists thing is pretty cool (although I didn’t get to try it). For my part, ideally gulag would always be fighting knives.

And there would be more spectators.

Yeah, we tried that and of course it bugged out and left one of us at a perpetual loading screen while dropping the others in a game.

Yeah, we tried that and of course it bugged out and left one of us at a perpetual loading screen while dropping the others in a game.

Oh bummer. On xbox it worked well, we definitely got an extra match in on the night in the time saved.

Quick restart is ok. It’s basically doing the queueing behind the Verdansk screen instead of loading the walkers first. It saves time for sure.

Snipers are silly, but it’s a videogame! Have some fun! Sheesh! If you don’t like the gun you get just switch to fists and beat the hell out of the other person.

I try, but there are snipers.

Actually I think the fists thing is pretty cool

This game isn’t designed for melee fights at all, so if I had to choose, I’d rather take the snipers.

The one fight I had I just got a lucky flash bang and beat him down, which felt stupid. And when I say stupid I mean boring even though this is a VIDEO GAME.

The thing is, the Gulag is perfect if you get a semi-automatic weapon without optics, preferable not too lethal (and drop the lethal and tactic as well). So it’s just you and your skills with your wits against the other player. Not sure why they keep fucking this up.

The sniper gulag fights I saw (which was my three and a couple others my buddies got into that I was able to observe) boiled down to just getting close enough to gut shot them with a side of melee anyway, so it amounted to the same thing. The gulag is too small and close to use the giant scopes they stick on the snipers.