[Comics] What happened to thought bubbles?

So after bringing it up in the Transformers thread I got a hankerin’ to read some of my old comics. I pulled the box out of my son’s room and was going through and found I had some pretty cool comics from the 80’s I hadn’t touched in ages, so was reading through them.

I was floored to realized I hadn’t seen a thought bubble in … man, years at least, maybe a decade. What’s up with that? And the narrative boxes, that used to have some really cool insight and seems to have replaced thought bubbles, is just gone in the original format! I miss it now that I know it’s gone.

Here are some examples of what worked, in my opinion.

And here is a modern comic and how they handle thoughts with boxes instead. I don’t mind they use the boxes for the thoughts, I think my biggest issue is the loss of the great little narration/descriptions. Sometimes the art just isn’t as good as a well placed sentence, in my opinion. 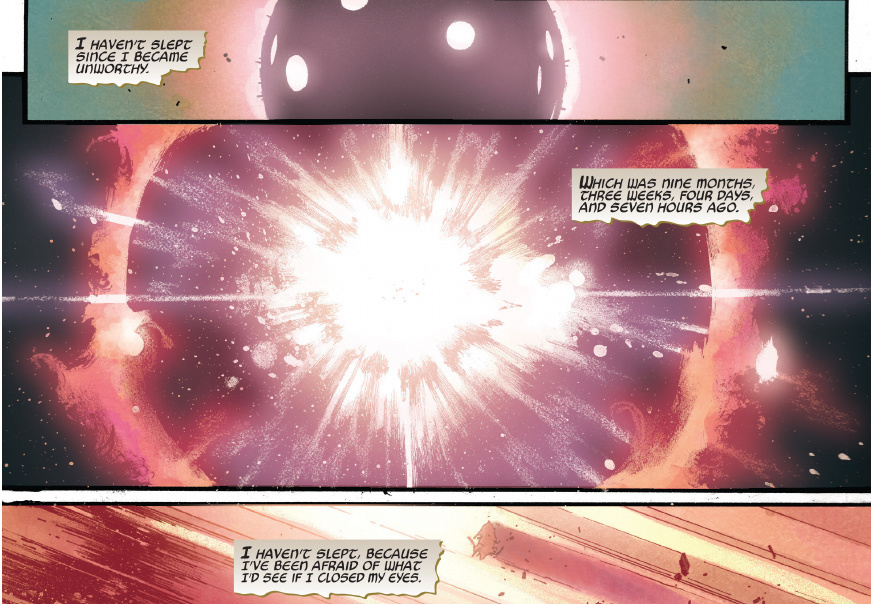 Anyone have any insight into why this was changed, or when? I’ve been reading comics on and off for over 30 years and while I’m not super caught up on current book, this struck me like a slap when I started reading the older books I have in storage. Any opinions on this?

My recollection was that it was an editorial edict at Marvel to eliminate thought bubbles, around the time that Quesada and Jemas were running the place. I’ll see if I can find something more concrete.

[quote=“Scott_Lufkin, post:1, topic:127521”]I don’t mind they use the boxes for the thoughts, I think my biggest issue is the loss of the great little narration/descriptions. Sometimes the art just isn’t as good as a well placed sentence, in my opinion.
[/quote]
I think you’ve kind of hit on it here. Take your example:

Basically, the narrative box duplicates the action “on screen” to an almost ludicrous degree. Bryne’s art nicely conveys the fact that Phoenix is using some mental power to fly and that she’s taking Dazzler and Cyclops along with her. The ONLY piece of information that the box is adding is the fact that Phoenix smiled and nodded beforehand… which honestly just makes me wish they had provided another frame to show that.

That’s not to say that the narrative boxes have no place… I don’t necessarily want to see a full page of someone brushing their teeth and getting ready for work; I’m happy to see a “Later that morning…” box instead.

As for the transformation of thought balloons into narrative boxes? I think that’s just a side effect of the comics’ narrative style becoming more complex. In the earlier eras, most of the books were written for a younger audience and most of them features something like a third person omniscient point-of-view. The reader pretty much knew everything that all the other characters knew… even up to and including the villain.

So in your first frame up there, we get to see Nightcrawler and Dazzler’s inner monologues as well as Cyclops and Kitty’s exposition.

Nowadays, most authors seem to be going with either a first person or a third person limited POV, which means that the thought-balloons would seem a bit out-of-place since they’d only ever be coming from a single character anyway. Much more efficient to turn them into narrative boxes… which is really what they are anyway: the voice-over from the character.

As for when that changed? I’m no expert, but I’d bet it was Frank Miller and his ultra-successful Dark Knight Returns. As I recall, he eschewed thought-bubbles in favor of character-specific colors for narrative boxes; and only one character could narrate per chapter.

AFAIK, comics shifted away from thought balloons/bubbles in the 80’s. Alan Moore was a big opponent of them. When he was working on V for Vendetta, David Lloyd, the illustrator, suggested using the floating blocks for internal monologue because the bubbles with tails were interfering with the cramped-up art in the B&W panels.

[quote]
“All of a sudden it made everything much more real and documentary. The less that you relied upon captions and thought balloons, the more compellingly real the dialogue and pictures became.”[/quote]

Frank Miller also started using floating blocks at right around the same time. Watchmen and The Dark Knight Returns both had no bubbles. And since everyone wanted to be cool like Moore and Miller… Boom! Away goes the thought bubbles.

I may have used a poor example, here is one I like better.

In the end, I understand why they made the change - but I am still torn on if I agree completely or not. I guess I never noticed until like literally last night, so it must really have worked out for the best. 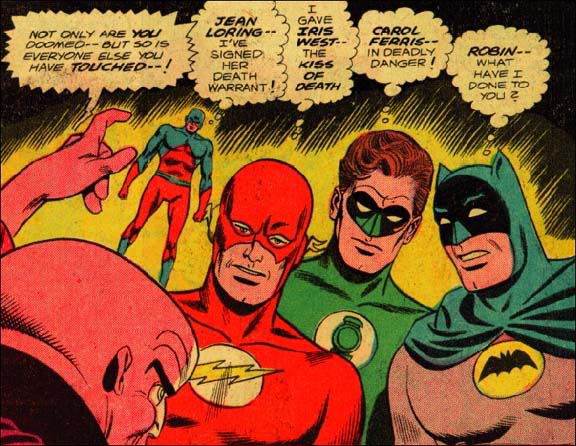 The thought bubbles could get pretty ridiculous in the old X-Men comics. You’d have the characters thinking lengthy paragraphs in panels that covered a split second. I don’t miss that at all, other than for comedy nostalgia value.

I suspect that comics were originally for kids and maybe the thought bubbles helped younger readers follow the conversation. Perhaps as the audience grew older and continued to read comics the need for thought bubbles went away.

Somewhat related: I’ve collected a bunch of omnibus’ of 60’s and 70’s Captain America and others, and damn if every dialogue and thought is followed by an exclamation point! Every one! Pages and pages! Most of the stuff is written by Stan Lee, so perhaps it’s just his style.

I may have used a poor example, here is one I like better.

Oh I definitely agree about getting rid of thought bubbles - everything I’ve read both here and doing some of my own research has well convinced me, it was just a huge surprise to remember they ever existed. I do fully want more narration/story telling in the boxes though. Sometimes even a fantastic piece of art doesn’t convey as much as just a little extra text might.

And I also wonder about younger readers - some of what I’m reading seems clearly defined to help younger audiences follow the story and I don’t know how well comics are doing with the younger kids (I mean, I loved them when I was 8 or 9, maybe even earlier than that) but if they aren’t doing well with that crowd, this could be part of why. Hard to say, I’m sure the powers that be have done exhaustive research on the subject.

It’s interesting to me that you keep citing Claremont panels in this wistfulness for the text boxes of old. I went back through a few of those recently when I got the X-men/Alpha Flight compendium book, and I had the opposite reaction. They felt archaic! So overly wordy it was pinching out the art, and in many cases just echoing what the pictures showed. The artists on these books were Paul Smith and Art Adams, and Claremont has no excuse for not trusting either of them, or John Byrne from your examples.

Reading those was actually a little tedious for me, a real “you can’t go home again” kind of moment. They reminded me of reading books written by Stan Lee. Have. you ever done that? It’s like the guy didn’t realize there would be pictures accompanying it.

I would not be surprised if the modern dogma about them stems from a reaction to Claremont’s use of them.

When did they get rid of dotted sight lines?