New Order & Pet Shop Boys are touring together this summer/fall. I was a big fan of both back in high school, and I do love me some live music, so I figured I’d take a run at some tickets. They’re playing here in Toronto at Budweiser Stage, an amphitheater-type open-air venue with covered seats and a GA lawn area on the hill behind the seating.

I’m too old for that lawn game anymore, so I looked at the section 200 seating: $500 per ticket. So, $1000 for me and my bride to see these dinosaurs lip-sync to music from 30-40 years ago. Are they out of their minds? The lawn seats – general admission, uncovered, sitting on grass, potentially getting rained on – are $92.50. A hundred bucks to sit a kilometer away on grass?

I guess that’s what we get in the Spotify age, but holy hell that’s insane.

I had similar sticker shock when I looked for Liz Phair / Garbage / Alanis Morisette tickets in Atlanta yesterday. $150 USD per seat was the lowest.

… but there’s NO way I’m paying that much so zero USD from me.

I paid a not-small amount of money for my mate and I to see Roger Waters this summer. We don’t overlap much musically, and I know Roger isn’t going to phone it in, so I didn’t mind paying them. We are going to make a mini-vacation out of it though.

And that’s the thing. I paid more to see Rush a few years ago because I knew there wouldn’t be many more chances at that. But for random things that would just be a fun night? Nah.

The wife and I will be seeing Ringo Starr and also Judy Collins with Arlo Guthrie in June. Tickets $50 per person at Tanglewood, inside the shed so we won’t get rained on. We saw Stephen Stills with Judy Collins and also David Crosby plus some old friends there two summers ago. Were going to see Brian Wilson too, but the show got cancelled. Tickets were around $50 each then also.

Another problem with concerts is I spent 4 years as a roadie for major rock bands. Needless to say, I got used to having an amazing view and access to catering.

Sitting in the nosebleed seats just doesn’t work for me anymore.

On the plus side: tickets might get REALLY cheap as the zombie apocalypse progresses (assuming events aren’t entirely cancelled).

I just got tickets to the upcoming TOOL concert and it’s in a really nice looking stadium (the TaxSlayer in Moline, IL) and the tickets were $95 each and we’re sitting in pretty good spots. 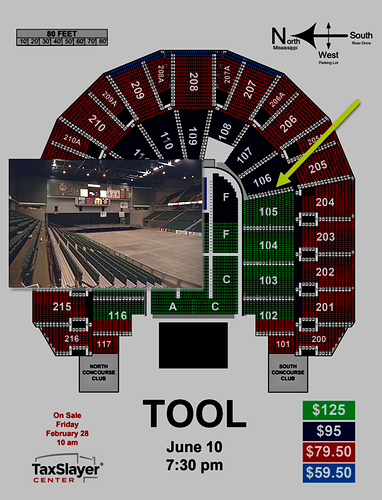 The average concert I go to is about $15. By which I mean half are $10 local shows at the dive bar down the road from my house and half are $20 mid-tier European metal acts at the smallish standing-room-only concert venue the next town over.

God, I fucking hate amphitheater/stadium concerts. The sound is terrible, being outdoors for the former is terrible, the views are terrible, the prices are awful, and never include the 75% in fees you get by getting fucked by Ticketmaster/Livenation.

Truth. Maybe the most talented popular musician of all time. And all-around funny weirdo:

Can’t miss an opportunity to proselytize, so if anybody’s interested:

I paid the most I’ve ever done for a rock show to go see Nick Cave in September. $95 is a lot of dollars, but how many more times is that dirty old man going to be touring the tundra?

I’ve only seen him do his weird side project (Grinderman) to date, and even that was the second best show I’ve ever been to. I am stoked.

I am still a fan of both bands (the latest PSB album that just came out last month is great!), and I was really excited that they’re touring with New Order. But then I saw that the closest they will come to Kansas City is Minnesota! Jeez!

The lawn seats – general admission, uncovered, sitting on grass, potentially getting rained on – are $92.50. A hundred bucks to sit a kilometer away on grass?

During the 90s I went to quite a few concerts in St. Louis. The last one I went to was Sting. I loved Sting, but I couldn’t afford good seats up front anymore since prices had already started going up a lot. So I bought lawn seats, and oh man, never again. When you’re sitting near the front, lawn seats don’t look like they are that far back, but when you’re sitting on the lawn, they really are too far. It felt like it would have been better to sit at home and listen to a Sting CD instead.

At $50, I don’t feel too bad paying to sit a little closer. My wife had never seen David Crosby live, and when she left she told me “that is about as close to a religious experience as I’ve ever had.”

He was really on fire that night.

You can see great lesser known bands for like 10 bucks still. Mid tier bands at a club around 30. Stadium prices are bullshit.

Ive been bored in the last few concerts i went to. That or a sore back from standing too long. Even bands I liked I was glad when it ended. Loud music is shit without drugs.

A million times this; small venues are the best and the cheapest

I paid the most I’ve ever done for a rock show to go see Nick Cave in September. $95 is a lot of dollars, but how many more times is that dirty old man going to be touring the tundra?

I’ve only seen him do his weird side project (Grinderman) to date, and even that was the second best show I’ve ever been to. I am stoked.

I saw him back in 2002 when he was touring after No More Shall We Part, and it is still hands down no contest the best live music experience I’ve had.

Snapped up my ticket for his October show in Seattle the day they went on sale.

Most of the people interested in these kind of nostalgia shows are middle-age, white, and largely more prosperous. You have it, you’ll pay it, so they soak the oldsters for what the market will bear.