Conflict at the top of Paradox Interactive

It may be MBA speak, but if they actually admit issues, they’re better than 99% of the industry. YMMV.

You can keep printing EU and CK money, but how do you expand and grow based on this weird, very particular signal from your customers?

You don’t have to expand (in the sense of a big spurt), especially if it’s out of your depth, if you’re making enough money to keep going for many years. They can keep trying new things and publishing/acquiring small experiments that don’t break the bank and have some reason to be in the brand. If they find a new Triumph or Harebrained, why not.
Whether they have done it successfully, well, there’s a reason I don’t give investment advice, so, no comment. :P

“We have also seen too low velocity in our internally developed projects.”

Too low “velocity”? WTH does that mean? They’re not making ammunition are they?

If you’re serious, velocity is a software development buzzword. The full term is “sprint velocity”, and it refers to how many tickets, or features, or bugs a team is able to complete in the timeline of a single “sprint.” Sprints typically last two weeks. The CEO is saying they aren’t getting shit done fast enough on Stellaris, CK3, V3, and HOI IV.

“We have chiseled a straight line forward for leveraging and developing Paradox’s strengths and have ground down many irregularities.”

That’s one of the silliest sentences I’ve read in a long while. Realistically, what does it even mean? What are their strengths and what are these “irregularities” he speaks of?

There have been irregularities in Paradox’s releases lately, especially the ones developed by outside studios. The EU IV expansion was the lowest rated item on Steam ever. The latest Surviving Mars update broke a lot of things and was also not well received. Bloodlines 2 was so bad it was pushed into next millennium.

It’s hard to say what action has concretely been taken from this statement, but it’s clear they are looking to manage their published titles more closely.

We put a lot of effort into ensuring that we henceforth have the right level of quality on all content we release. Going forward, we have a stronger framework for how we work with and set targets for the quality of games and expansions and have created a clearer ownership of game quality where decisions are made closer to game development.

I can take a shot at this.

Again this part goes back to their published titles, a.k.a. things not developed by Paradox Development Studio. My take is that they had too loose of reins on these other studios and let deadlines be the determining factor for when products were released rather than the game meeting defined quality guidelines. I imagine they didn’t have these guidelines or were lax in applying them in lieu of just hitting their release window. They were probably being more driven by business decisions rather than gameplay ones.

As an investor, I would imagine they have spent time to put this new quality framework into place and will apply it to future releases, especially published titles. He also indicated that decisions are made closer to game development. I take this as meaning PDS will be taking a more active role in these titles, more closely consulting and being more involved in day-to-day development.

I don’t necessarily buy any of this, but I think it was an important admission, and to me he indicated an understanding of the current issues with the company.

It just sounds like a lot of words for “we’ll do better”.

You guys are insane. I don’t like to judge people. Well no, i like to do that, but anyway, I don’t know how one cannot consider this empty waste of words as the absolute opposite of what human language is meant to do.

You don’t have to expand (in the sense of a big spurt), especially if it’s out of your depth, if you’re making enough money to keep going for many years. They can keep trying new things and publishing/acquiring small experiments that don’t break the bank and have some reason to be in the brand. If they find a new Triumph or Harebrained, why not.

In the regular software world, this would be a sound strategy. The gaming world is extremely risky though, and if you don’t find more baskets to put your eggs inside, you could easily find your company dying.

At a personal level I just hope they do right by Triumph (and that whomever makes up the core team there wants to stay together making games).

Very glad to hear that :)

Shams Jorjani, one of the most public faces of the company, is leaving Paradox.

@ShamsJorjani
A small (!) personal update! I've resigned and Nov 30th is my last day at Paradox Interactive after 12 short and amazingly fun years. Real tough decision for me but what a wild ride it's been. https://t.co/cxmiP5dCX8
cornchip November 25, 2021, 6:35pm #138

Nuts, I guess The Business of Videogames podcast is well and truly finished now that he and Goldberg are gone.

I have a question. How do I get statistics on the popularity of various Paradox games? I’d like to understand both the sales of the base games and the average number of players?

Unless you wait for publisher numbers, and you trust them, on the likes of Steam Spy and Steam Stats. 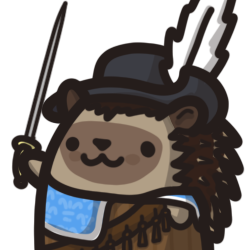 @SirVogelius
Hey! Friday is my last day at Pdx after almost 9 years here creating memes like Glitterhoof, my crowning achievement. Going to miss shitposting, so since it's my last week doing so: what's the thing you want me to tease tomorrow? I want to give you a proper treat before I leave! https://t.co/KdGIis3b4D

This is what… the third or fourth very experienced Paradoxian leaving in the past few months? The great resignation seems to be taking its toll at PDX

That’s too bad, Groogy has seemed to me to be one of their better designers. Looks like he’s going to be a lead designer at Ubisoft Stockholm.

It can be, but this sounds like a step up / promotion of sorts so it might just be that. And wanting a change in scenery after a decade, perhaps.

Experienced devs leave voluntarily all the time, especially in the gaming industry.

When Wiz leaves it’s all over

LinkedIn says there’s at least one CEO in the world named Ethel Easter. I think she should succeed Fred Wester.

A new direction for the company.

In the absence of likes…