Conflict at the top of Paradox Interactive

Or “culture of silence”.

Who would be doing the mistreatment? Management? Executives? General staff?

Given Scandinavian culture, there is probably a lower threshold for classifying something as harassment and bullying here than in most other places, but those are truly shocking numbers. Precisely because there is so much focus on gender equality and anti-bullying in our cultures, companies tend to react strongly to try and prevent it.

It’s many years since I worked in Sweden, but I’d say that’s extremely unlikely. It is quite hard to fire someone under Swedish labor laws, but that doesn’t stop HR from initiating action against the offenders. No way that they do not have internal reports of this behavior also. A “culture of silence” is not natural for most Scandinavian companies.

Also, Unionen and Sveriges Ingeniører who are the ones behind the survey… these are pretty big unions (900K members or so). You don’t screw around with unions in Scandinavia, so I don’t think this will be swept under the carpet by some paid report. The backlash from doing so would be extremely nasty.

So the survey was done by unions? If so, it doesn’t seem to me to be as “informal” as their reply suggests.

So while I can’t comment on any of the specifics, also because I know very little about it due to it being focussed on the Swedish office/union, the RockPaperShotgun article is currently the one that most accurately describes the situation surrounding this report and its background.

Thanks, and I’m sorry for the turmoil any of you may be experiencing. You’re good people :)

Well, today I learned I can’t read RPS anymore. Total block of content blockers on my tablet - as if I am going to deactivate my proxy.

That seems odd. I use uBO, privacy badger and a bunch of other stuff and have no issue viewing it. Is that your provider or vpn?

I am using an iPad, and they took forever to implement adblockers so I have been using a proxy locally setup to redirect adservers into a local blackhole, the old way.

i get this prompt, and no way around it. Selecting to turn off adblockers tell me how I should be using a computer to read their site. Snobs. 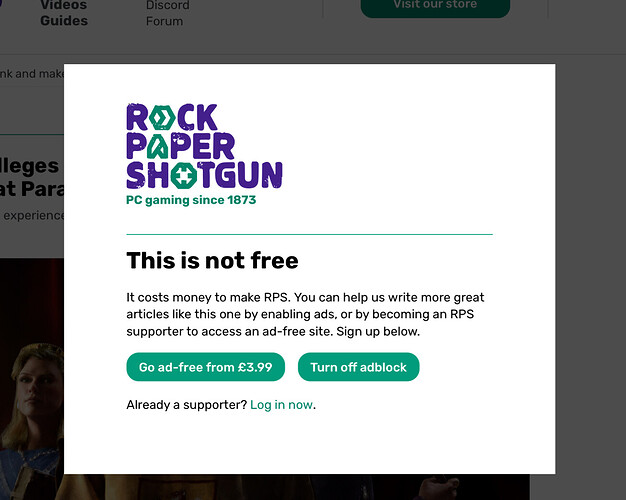 Edit: well even turning off the proxy doesn’t stop the money hungry nagging to pop up, ha!

Yeah the money nagging has got worse, dropped it from my reading now

I don’t want to be “that guy”, but how do they make money and survive if they don’t have ad or subscriber revenue?

They dont- it is the major issue facing a lot of media everywhere. People want their news for free. After all, they can get so on Facebook, right?

Well if this is the kind of quality being developed under the previous CEO, maybe it’s a good thing she stepped down: 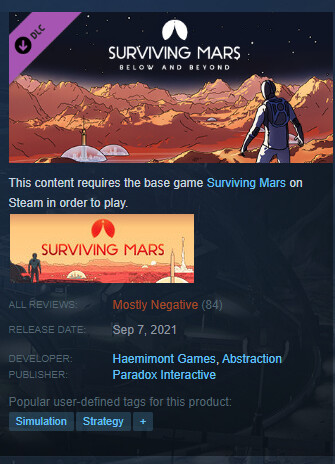 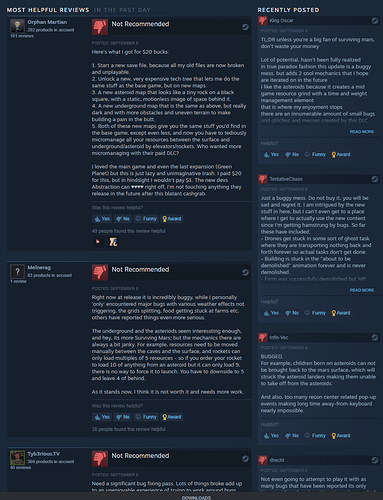 I read through all the reviews and sadly they all seemed fair. They want it to be good, but it’s a terrible bug-ridden mess with some glaring flaws in implementation. I have it myself and was going to give it a try this weekend, but I think I’ll wait til a major patch hits and save myself the frustration.

Folks have enough to pay for already these days.
Once you’re used to getting something for free, it’s hell to get someone to pay for it.

Wow, that sucks. The base game is quite good. Appears they switched development teams?

Folks have enough to pay for already these days.
Once you’re used to getting something for free, it’s hell to get someone to pay for it.

I think that’s part of it but only part.

Growing up, people were willing to pay for newspapers and magazines. But that was a handful of publications a person, very few people even wanted to deal with the pile of paper inherent in dozens of publications. And I am still willing to pay for a handful of online sources. But that’s not the way the internet is consumed. I have no idea how many different sites I hit at least once every few days, but it is a very high number, and no, I am not willing to pay for them all. (Especially since some of them I read largely for knowing what the opposition is thinking.)

I don’t want to be “that guy”, but how do they make money and survive if they don’t have ad or subscriber revenue?

The ad half of that formulation is a little misleading I think. I read the county news website every day, it has ads, they get through my apps, and I hardly even notice. The problem kicks in over outrageously abusive advertising (like masquerading as content) and the trackers.

The sad truth is that from the beginning, businesses found that advertising on the web lacked the image-ad impact of TV advertising. So they refused to pay big bucks to place ads there. It’s the tracking and selling of information about the readers that brings in the money, and it brings in the money only partly because ads can then be targeted. To a large extent, it’s that it enables nameless, trackless entities to rain down fraudulent scams at extremely little cost. So yeah, there’s enormous blowback and a lot of people become so furious they insist on blocking everything possible.

But I notice that a small family run county newspaper can still do fine with regular ads. And I’d guess that it’s because they are not corporate entities who have to show growth and all, they are just trying to support a family. And at least in this case, they are doing fine.