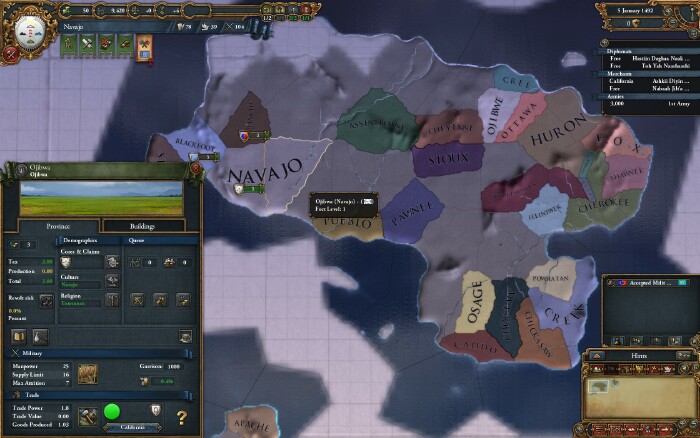 Behold an unfamiliar New World in Europa Univeralis IV's latest add-on, Conquest of Paradise! In the game I just started, this is what you'll find in place of the usual North and South America..

Alas, the game is still very europe-centric, but it's getting better!

this dlc is not a step in the right direction, it makes the game far more eurocentric

It's Europa Universalis, after all.
Kidding aside, the DLC makes colonial and native nations playable, and the patch has protectorates which create difficulties for European countries.

So, I don't quite agree.

no attention has been paid to the native nations themselves

im not saying i dont enjoy playing it, or that its not a refreshing change in the series game play wise

What part of "playable Native American nations" do you not understand? I can tell from your posts that you're illiterate, but are you also blind?

native nations have always been "playable" since eu3 ,
the fact that the north and south american continents can be randomized was to increases the euro-centricity of the game, by specifically altering the actual world to better suit the frame of minds of europeans at the time.

That's absolutely true about native Americans being playable, but why would you want to? At least Conquest of Paradise provides a refreshing new answer to that question with unique mechanics for those factions. It's pretty disingenuous to ignore that feature.

Nothing that was added in anyway reduces the euro-centricity of the game, which was my only point.
im having a blast playing this dlc, i like many of the new features, but in no way does it make the euro centric game europa universalis less euro-centric if anything its is more so, thats my only point