Joe Carnahan has wandered a bit since the early days of Narc or Blood Guts Bullets and Octane. There’s The Grey, which was a pensive survival story that I loved, but it felt very out of character for Carnahan. He’s mostly written and directed action shlock like A-Team (whee!), Smokin’ Aces (eh…), and Boss Level (ugh). Copshop is very much in this vein, but with a distinctive flavor. It’s a uncanny throwback to John Carpenter movies with Grim R-Rated Stuff Going Down In A Contained Setting And There Are Some Bad-Ass Dudes Dealing With It.

But there’s one important difference this time around. Her name is Alexis Louder and she is glorious. She is the Kurt Russell in this movie and she absolutely nails it. 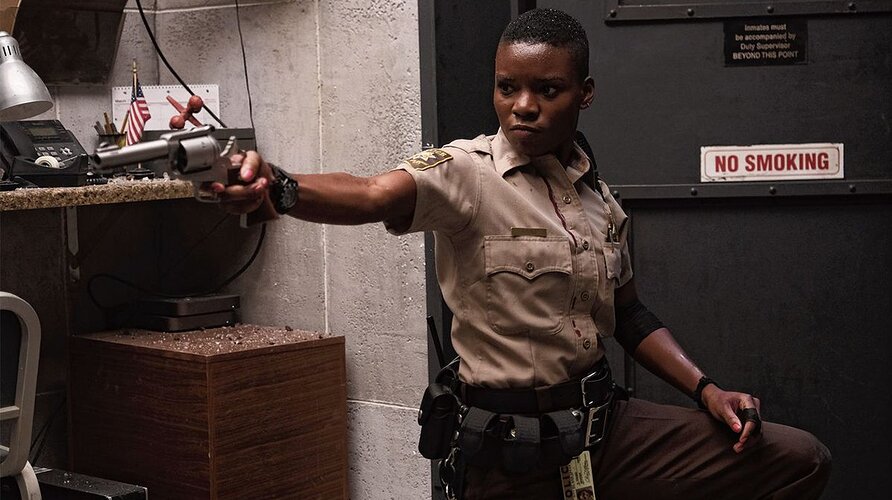 She can hold a steely gaze and an over-sized chrome-plated six-shooter with aplomb. She doesn’t wink at the audience, but neither does she take herself too seriously. She has charm and grace, but she’s not magically invulnerable. She does wonderfully over-the-top action hero stuff like she was born for it, minus the usual white male testosterone. I could watch this woman’s scenes in Copshop, on a loop, for days on end.

The whole cast is great, mostly in familiar character actor ways. Chad Coleman’s gruff sergeant is listed in the dictionary under “stereotype”, but that doesn’t make him any less of a delight. If you didn’t know who Toby Huss was before Copshop, you certainly will after Copshop. The term “ballsy” comes to mind in terms of what he does in this movie. Who does that? Well, Toby Huss does that. Even Frank Grillo, who’s been churning out a string of duds lately, has a comfortable spot. In fact, Grillo’s hair, which has been on the edge of absurdity for the last six or seven movies, finally jumps the shark in Copshop. I like to think it’s a gift from Joe Carnahan.

But the movie belongs completely to Alexis Louder. She stands out to such a degree that Gerard Butler feels like a supporting character. Actually, scratch that, Gerard Butler is a supporting character. For some reason, the movie makes a show of hiding his face during the early scenes, as if it’s going to be some great treat that he’s in this. Which it sort of is, since this is vintage Butler. He’s having a grand time goofing off. But it seems like even he knows he’s playing second fiddle to Louder.

If you didn’t know who Toby Huss was before Copshop, you certainly will after Copshop.

Heck yeah I know who Toby Huss is - he’s the strongest man in the world!

She’s also in HBO’s Watchmen and has a one episode role in Teenage Bounty Hunters that I recall being pretty great.

If you didn’t know who Toby Huss was before Copshop, you certainly will after Copshop.

Heck yeah I know who Toby Huss is - he’s the strongest man in the world!

He’s also The Wiz! And nobody beats him!

The superhero we deserve.

He’s also The Wiz! And nobody beats him!

If we can’t get a “like” button can we at least get a “Dingus would approve” button?