Has anyone seen Count Chocula on the shelves yet this year? I understand that it’s a Halloween-only thing these days. I saw a bunch of different Halloween-themed cereals in Target last week, but no Chocula. I don’t want to miss out this year, so let me know if you’ve seen it any place!

PS Target also had all their Christmas stuff out already. What the FUCK.

I haven’t seen the cereal in stores, but I did see a lanky African American gentleman standing on a streetcorner in midtown wearing a Count Chocula costume (presumably to advertise a nearby costume store). His glasses were a bit out of place, but otherwise, he was pretty convincing.

I just discovered you can buy it on Amazon. God I love the internet.

God I love the internet.

Yes, sir. Indeed you do.

Count Chocula is Halloween only? I knew some places only put out Booberry , and sometimes Frankenberry, around Halloween, but I thought Chocula was always out year-round. The Walmarts here actually carry all three monster cereals year-round.

Yeah, we have the Count year-round in Austin. I haven’t seen Frankenberry or Booberry, though.

I noticed they have Chocolate Lucky Charms now, which is almost exactly like Count Chocula.

I wuv Booberry. I had it as a special treat when I was kid. I know it’s just blue colored frosted sugar bombs, but it will forever hold a place of nostalgia and wonder in my heart.

The Sam’s club near by has a three pack of The count, boo, and frankenberry. Cant go wrong with the holy trinity in one box.

All three can be found here in Alabama, but we’ve always been the most progressive state when it comes to great taste and poor nutrition.

Target had all three in a special display today. I haven’t seen them in years, so they must only be for halloween promotions now in my area. 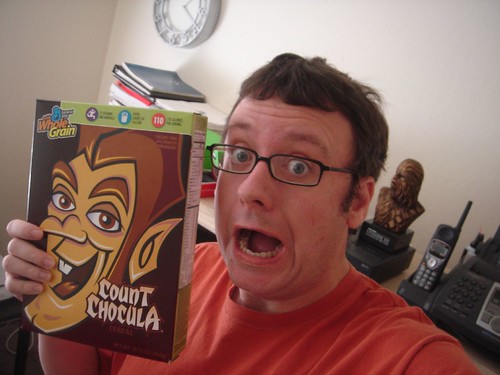 BTW, what does the Wookiee statue do besides sit there? Are those buttons on the front of it?

It just sits there.

Its a trifecta!! The Count, Gary, & Chewbacca all in one picture. What are the Odds?

Its a trifecta!! The Count, Gary, & Chewbacca all in one picture. What are the Odds?

Maybe, but who could have foreseen the can of compressed air?

I am soooo posting that picture EVERYWHERE on the intarweb.

All your base are belong to Whitta.

Gary, Jefferson Twilight will be paying you a visit.

The Count, Gary, & Chewbacca all in one picture.

Which is which now?