There’s more to those small gigs than you think though, I had to neutralize a target in a dance club but once there I could start a conversation with the guy giving him the chance to leave the city. That was really easy to miss, also due to some interface bug. Several gigs also refer to one another. A lot of stuff is buried underneath something else in this game or doesn’t come through as clean/precise as it should which is perhaps the biggest issue, even in the gigs. You have to wade through too many UI layers / shards to see the interesting lore stuff. Coupled with the multi-approach level design I’d say this is the best collection of Deus Ex-like (mini-)missions I could think of. That’s the game’s true heart. Once the game systems are better balanced/the graphical/physics problems are fixed and / or modded people are going to beg Square-Enix to build the next Deus Ex in this engine or folks will try to convince Paradox to switch Vampire: Bloodlines 2 over to this. The NCPD skull missions and cyberpsycho sightings are more of a missed chance because they really feel like filler (except for a few surprises).

Maybe too many of these things are small details (like the hasty Takemura-dilemma in the main quest which a lot of people missed just because the game didn’t spell it out, that did have a bigger consequence all the way to the end though) but they are present.

Runs great on a three year old PC rig and it has me wishing for more. I got the Vampire: Bloodlines feeling (great setting, unresolved mystery stuff and most characters act and feel life-like) and that’s a rare thing nowadays. Biggest difference with Bloodlines is that more stuff to do will eventually come, even if we have to wait for a year.

Geez, that is rough. I admit that I can’t maintain 60, but I checked last night and mine is running mostly around 55 FPS, a few dips down to 52 and a few spikes up to 59/60 - but I haven’t noticed any drops with the naked eye.

I’m sorry your experience has been subpar - but for where I’m at, the 48" LG with 3080 has been the best immersive experience that I have personally had.

Those aren’t my benchmarks, they’re from Techspot’s benchmarking review.

Don’t get me wrong, it’s awesome to gawk at in 4K HDR, and it can spike to higher frame rates, it’s not at all unplayable. I prefer a more stable high frame rate. I could try downscaling to 1440 on the LG, but if I’m gonna do that I have a nice ultrawide sitting right next to it, which is probably the best fit for the 3080.

Once the game systems are better balanced/the graphical/physics problems are fixed and / or modded people are going to beg Square-Enix to build the next Deus Ex in this engine or folks will try to convince Paradox to switch Vampire: Bloodlines 2 over to this.

Hahahaha. I guess anything can happen.

Oh, no doubt; I’ve commented on this earlier in the thread. There are cool little things buried in the game, with outcomes that vary depending on your actions. As you say, though, they are easy to miss. Also, they don’t matter in the grand scheme of things, which I’m pretty much fine with, but they also don’t matter at the mid-level, the sort of day to day world level. If there consequences to constantly ganking a gangs members or stealing their loot or whatever, the little side mission things would be far more meaningful.

DF posted a pretty great tweaking video which should get at least 15fps more at 4k from max settings without meaningful loss of visual quality.

I never noticed it was broken in that way. The Atlas key thing was inconsequential to the way I was playing, and it was fixed before it became an issue for me, and it’s also the only “game-breaking” bug I can recall.

The one I mentioned was pretty massive… you could get in a state where you never got the recipe to make warp fuel. Then you couldn’t warp… which kind of breaks everything.

Personally, I also ran into a number of issues with quests breaking when you left a system.

Then, when they made some of the biggest follow up patches that added new features, I ran into bugs where the quest lines designed to give you recipes for core gameplay elements broke, so I just got stuck and could never proceed.

This happened to me, personally, probably 4-5 times where some quest line broke and I couldn’t continue. I especially had this happen when some of the new big patches came out, where I then played them for a while, and was like, “Hey, this is cool, they added a bunch of new stuff…” but then at some point the quest introducing the new stuff broke, and I just put the game down again.

I had a couple progression blockers like that in NMS, it was a real mess. Like you I went back after one of the big patches and ran into more issues. Not surprising for there to be issues after a major update but as someone who hadn’t really had a chance to dig into the game it basically sucked all the motivation to play it out of me.

I went through Cyberpunk with one T-pose and maybe a couple glitched sidequest steps where a reload fixed it. I died one time getting out of my car. On an ultrawide monitor, there were occasions where part of my UI would be cut off but just hitting Start on my gamepad to bring up the menu would fix it. Other than that, no issues and I finished the game. I guess I just got lucky.

I played on PS4 Pro, almost complete media black prior to and after launch so I didn’t know about the drama and scandal with the bugs etc until I was almost done. It was a little rough but played well enough.

I absolutely Loved most of it. A triumph. Some of it hit me in the feels with how well some of the quests and dialogs went. It spoke to me and was right up my alley.

At the end, i had nothing left to do but finish the main story. It was last Wednesday morning, I had 4 possible endings. I was feeling melancholy and did with the suicide ending, fully intending to complete the other endings. It fucked me up. Then Wednesday day happened, and we all know how that went down. I didn’t feel like playing anymore and deleted the game.

I look forward to playing it fully again once enough time passes, cd project puts a lot more work into it, and I get a ps5 or gaming rig. Until, it was quite the experience.

The inevitable behind-the-scenes Schreier feature is out:

The inevitable behind-the-scenes Schreier feature is out:

It performed so poorly that Sony Corp. removed the game from the PlayStation Store and offered refunds, an unprecedented move, while Microsoft Corp. slapped on a label warning customers that they “may experience performance issues on Xbox One until the game is updated.”

I see people keep referencing this like Sony and MS pulled it from the store because it was so buggy, but I don’t remember it happening it like that. I think Sony and MS would never have done that if CDPR first hadn’t have come out and said you will get a refund if you ask for it. Apparently they didn’t clear this with Sony and MS, which of course went on the offensive after the announcement to have to avoid paying for a bunch of charge backs and return hassles.

Despite a promise earlier this week, CDPR is taking back their offer of a PlayStation Cyberpunk 2077 refund when it was revealed that no special deal was pre-arranged to ensure this could happen.

- Last year, when CDPR explained that it shares 10% of profits with staff, gamers and pundits assumed the devs would get rich. Adrian Jakubiak said he made around $400/month when he started as a tester in 2015. In 2018, as a junior programmer, he said he was making ~$700/month

Devs at CD Projekt said despite promises that crunch would not be mandatory, they felt pressured to work overtime on and off for years. I can't share all the stories, but here's one on the record that may help explain why it's been infuriating to see people downplay CDPR's crunch https://t.co/Qne7pti2tT

Fans and journalists were wowed by Cyberpunk 2077’s ambition and scale. What they didn’t know was that the demo was almost entirely fake. CD Projekt hadn’t yet finalized and coded the underlying gameplay systems, which is why so many features, such as car ambushes, were missing from the final product. Developers said they felt like the demo was a waste of months that should have gone toward making the game.

Not as rare as it seems, unfortunately.

In March, as the pandemic began ravaging the globe and forcing people to stay inside, CD Projekt staff had to complete the game from their homes. Without access to the office’s console development kits, most developers would play builds of the game on their home computers, so it wasn’t clear to everyone how Cyberpunk might run on PS4 and Xbox One. External tests, however, showed clear performance issues.

Oooh. A response from Adam Badowski. 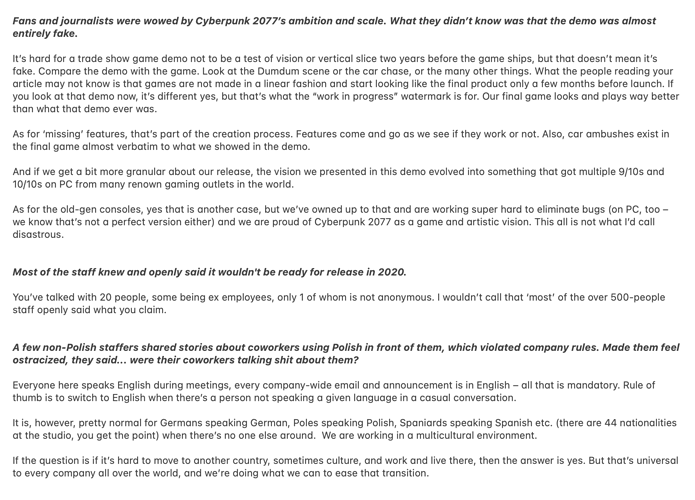 I can see arguing the top statement and maybe the bottom but the most the staff saying it’s not ready… when it was clearly not ready. Why argue that? I mean the game was released prematurely, not at all ready for last gen even. I am sure more than a few people said something about that.

It is difficult to match that refute with the video that claims leadership is taking responsibility.

Some of the points in that response–like the ones about language, or the non-linearity of development, make sense, but it dodges the main issues pretty handily. There is no way you can say with a straight face that the stuff people were shown that is not in the final game was cut as part of the normal creative process, or that it didn’t fit with some grand vision.

Not as rare as it seems, unfortunately.

What’s bizarre is this sort of thing goes on just for internal purposes too. I remember weeks being cut out of actual dev time (and a sorta mini-crunch to boot) to throw together some near-total bullshit ‘vertical slice’ for HQ that bore zero resemblance to the actual state of the game. At least it got the suits to talk about something other than their secretaries’ arses for an hour, I guess.

Fans and journalists were wowed by Cyberpunk 2077’s ambition and scale. What they didn’t know was that the demo was almost entirely fake.

It was a E3 demo, from a game that at that moment didn’t even have a release date, at this point I consider them always fake. So I knew it.
What I didn’t know was if the shown features real status was 0%, 20%, 50%, etc.