There a known good way to skip the game launch/intro videos and get right to the main menu? My Google-fu fails me.

Nexus had a mod for this but I don’t recall which one off hand. Ah, here it is.

I believe if you’re using Cyber Engine Tweaks it also has setting(s) for that.

Happy 10th anniversary to this thread. 10 years to the day since Cyberpunk was first teased.

I’ve been firing it up again the last few days (Got a new SSD so it’s installed again) and it really is an amazing looking game.

Happy 10th anniversary to this thread. 10 years to the day since Cyberpunk was first teased.

Finally finished today after 86 hours - near as I can tell I left no mission un-mished (only worked on main story when there wasn’t anything else to do). There’s literally handful of RPG(-y) games in my years and years (and years…) of play I can say I finished. Only other ones come to mind off-hand are Oni, NWN 1 & 2, and Control.

All the NCPD jobs were unmemorable, as were majority of the fixer jobs. But they managed to hit me right in the feels (absolutely wrecked me a couple times in the final stretch) more than once in the main story and featured character side jobs. I’m gonna miss this gonk. I think Jackie would’ve been proud of him at the end. He shook the Pillars of Heaven Arasaka. 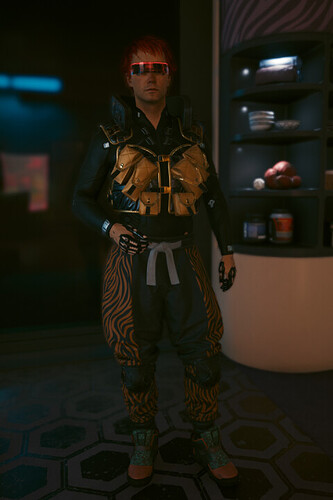 There’s literally handful of story-based games in my years and years (and years…) of play I can say I finished. Only other ones come to mind off-hand are Oni, NWN 1 & 2, and Control.

That was early on. Those are still the pants he started with. I tend to forget about talking screenshots so I don’t have much to choose from. This is the only other V picture I have:

The mistake I made with this game, which is a mistake I tend to make a lot, is that I end up choosing what turns out to be the best build as my first build lol. There are plenty of effective combos you can make, but to me, nothing tops cyber hacker, it just trivializes the game really.

I can’t think of an RPG where the systems kept me engaged for 50+ hours. Which leads to me rarely finishing any of them.

After I found a legendary smart shottie, shooting everyone in the face was just as trivial as hacking cameras and contagioning a building to death.

The stories managed to keep me interested for 80 hours.

I’m not sure there is a perfect balance between having a large array of viable choices, none of which is necessarily going to make the player feel powerful, and having a small selection of optimal choices, each of which turns the player in to a true bad-ass. Some players want to be assured that pretty much any logical build they make will perform as well as any other. Some players really want to be walking death machines, and would never choose anything else. Designers trying to cater to both will probably fail; it seems you have to pick a lane and stick with it.

Cyberpunk does a decent job of giving you a reasonable variety of approaches, though several are clearly optimal if your goal is blitzing through content. I’ve gone through the game with a mediocre balanced build where I chose just whatever I felt was right for my character, and I’ve gone through it with a spec build following a guide and optimizing every point. Both were fun runs, but they did play out differently.

Do we know how Phantom Liberty is going to fit into the main game? Standalone, some in-game quest giver with a recommended level, separate choice from the game menu…?

I wouldn’t mind trying new content with a female V, but not sure I want to play through that intro again.

If you’re playing on PC you may be able to just import a pre-made save: The Cyberpunk Save Games

an series of saves from all the life paths from the beginning, acts and endings of the game

Did this game ever get fixed? I so desperately wanted to love it at some point but it practically went out of its way to upset me with how ineptly everything in it was implemented. Not expecting perfection but just being able to get through 2 story missions in a row without something breaking horribly would be great.

I fished it and I rarely finish games.

I played a mostly unbroken play through on the Xbox last year. I ran into one glitched mission that would consistently kill me out of the blue every time within a few minutes of loading any of my last few saves and I had to go back to a save from before I’d even started the mission. Lost a little over an hour of progress to reload a save that far back, and it was frustrating. But other than that I had no glitches of consequence.

Played through 3 times on Xbox. No major issues. This game is fantastic so give it a go!

Never registered this. Johnny you asshole.

Modder 'Halk Hogan PL', the man behind the amazing HD Reworked Project for The Witcher 3, has announced a similar project for Cyberpunk 2077.

HD reworked project is being worked on by the guy who did Witcher 3 HD, whose work was recently used in the new Witcher 3 upgrade.