What’s your problem? I’m not bagging on it. I’m being realistic. Fuck you with your personal attacks on me.

It wasn’t a personal attack, but an observation. Dude, you love to rip on this game, to the point that it’s kind of hard not to notice. (Which is fine, btw! It probably deserves to be ripped on!)

It wasn’t a personal attack, but an observation.

I plan on playing it on PC. Sounds like snag it for $30 and don’t expect too much is the consensus here.

You can expect a lot. It has an amazing atmosphere, sense of place, most of the quests are great as are characters, I loved the gunplay as well.

Just don’t expect GTA and its level of open world AI systems and you should be fine; it is closer to something like Bloodlines in its design.

You will also likely experience various cosmetic glitches, and be annoyed by unzooming minimap. But I would say it is definitely worth playing even now, it has good replayability (just like with TW3, I did not want it to end and look forward to second playthrough, bolstered by the upcoming updates and expansions).

I left off at the start of ACT 2, and am planning to return to it in 2022, with the promised free DLCs, updates, and patches! They are on the roadmap, there will be multiple! 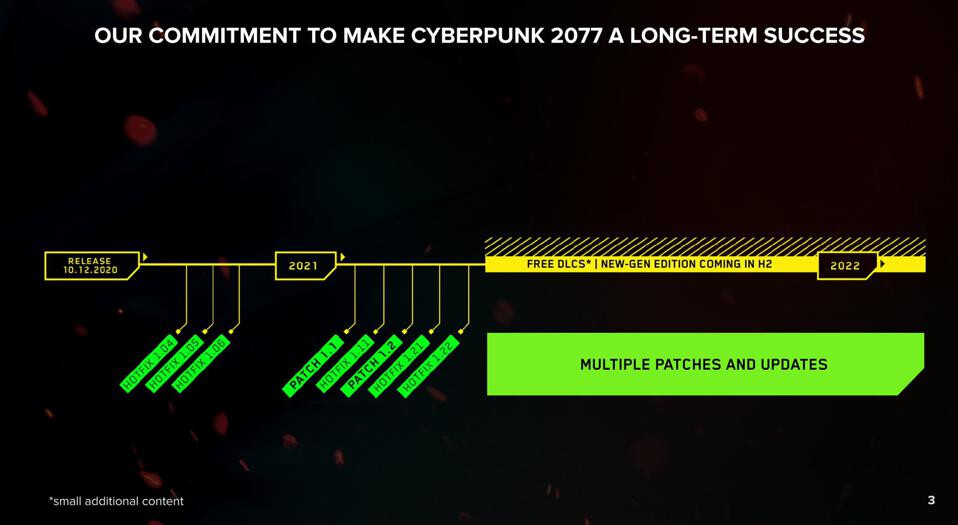 I’d just wait until further patching and the free DLC are out. I’m certain you have some stuff in your backlog. I have the game but don’t plan on touching it for at least 6 months to a year. I’ve got plenty of other games in the meantime.

It feels like this game has stuff that can be patched into better shape (like bugs, especially story/quest bugs)…but also has issues that are fundamental to its structure which represent some questionable and outright poor design decisions that likely can’t ever be fully fixed to match the promise this game seemed to offer. Which is a bummer, but I’d say the core of the game probably is what it is now.

There’s stuff to enjoy in it, for sure. Come for the world and some fun and interesting quests, some good characters, and especially if you’re a fan of the genre and are willing to temper your expectations. But unfortunately, this does feel like a step down from what CDPR delivered with Witcher 3.

Definitely no Witcher 3, but on PC, despite the bugs, it was definitely an enjoyable single player campaign. Now that most bugs have hopefully been squashed I don’t hesitate to recommend it. Some good writing is in there and a great atmosphere and sense of place. You can buy a game key on cdkeys.com for $21 bucks, it’s a no brainer.

It’s a bit of a poster child for ray tracing so if you’re picking up a 3080 at some point, this would be a good title to test it with.

Yeah this was my take too. I played it once for about an hour, and in that time already encountered quite a few glitches. Nothing game-breaking, but enough to constantly kill the immersion. I’ll go back to it in another six months or so.

What I saw of it did look good though. I think I’ll really enjoy the game, in time.

Sorry for spazzing and over reacting.

Sorry for spazzing and over reacting.

No apology needed. Sorry for coming off as a jerk.

Hey! No apologies and common decency between people on the internet. That’ll earn you an ejection.

It’s easy, I think, for emotions to run high on this particular game, regardless. A lot of disappointment for a lot of folks (me included) who had very high hopes.

Personally, I’m hoping to go back and give it another chance maybe in 2022 with absolutely fully re-calibrated expectations.

It feels like this game has stuff that can be patched into better shape (like bugs, especially story/quest bugs)…but also has issues that are fundamental to its structure which represent some questionable and outright poor design decisions that likely can’t ever be fully fixed to match the promise this game seemed to offer. Which is a bummer, but I’d say the core of the game probably is what it is now.

There’s stuff to enjoy in it, for sure. Come for the world and some fun and interesting quests, some good characters, and especially if you’re a fan of the genre and are willing to temper your expectations. But unfortunately, this does feel like a step down from what CDPR delivered with Witcher 3.

I think this is a very fair assessment. But I have also seen modders do wonders with some games and completely transform the underlying systems, so I’m not ruling out that the developers with access to source code couldn’t do the same. As always in such cases though, it will likely come to whether someone in charge who’s high up enough will want to stick to the original vision and/or if further development costs in that direction would be justified.

I also agree with @Destarius that the perceived waste of potential hurts more than what is actually wrong with the game.

I’d rather recommend Control for that. It’s as ambitious as it wants to be and ray-tracing is very noticeable there. Most importantly, limited focus in level design makes the game perform fine with RT in 4K on something like GeForce RTX 2070 Super and it looks good. With Cyberpunk I had uneven performance even without RTX. I’ve only played the release version so maybe performance is better now, but I’m not sure.

Thinking now about this game after completing it on release. It’s impossible to overstate how buggy it was, even though 95% of bugs were harmless, but it took you from the experience constantly. I made an experiment screenshoting every visible bug and got something like 10 screenshots in 10 minutes, and on top of that I had sound bugs, AI bugs, weird movement through walls etc.

CP2077 really made me appreciate modern boring open-world AAA games. They are unimaginative, made by the book, predictable, empty… But they learn. In 2015 Witcher 3 put to shame most open-world games with its good writing and tech. But since then things changed. I’m playing Far Cry 5 right now when my brain is too burned for something decent and it’s a good example of what I’m talking. It’s similar to CP2077 but worse in many regards like writing, art, world design. But it’s still OK to great in all of those areas. It’s tech is less impressive but CP2077 doesn’t get to brag about it till it’s bug-free. More importantly it works even without bugs. People focus too much on those bugs and miss the fact that the core gameplay loop of CP2077 is flawed beyond fixing.

Loot is unsatisfying and boring. The economy isn’t interesting as there isn’t anything good to spend money on except some augmentations maybe - and even augmentations that sound interesting (double jump) do not give you any real advantage or open possibilities. Your stats barely affect your playstyle - I know cause my character was the worst sniper in the world yet by the end sniper rifle was my most effective weapon. People have figured out that a lot of perks just simply do not work. And with dumb AI and teleporting enemies fighting is just isn’t interesting. Back in 2008 when I played Fallout 3 I was blown away by a proper open world RPG being stitched to a crappy shooter, and CP2077 basically does the same. Witcher 3 combat and loot weren’t something to write home about either but it was simple and it worked. CP2077 is much more ambitious in terms of gameplay but unless you’re playing stealth melee character you’re playing a subpar looter shooter with a decent (but unfocused and uneven) story.

It is odd, that after all this time they still have not fixed most of the broken perks. You would not think this would be a difficult task.

It is odd, that after all this time they still have not fixed most of the broken perks. You would not think this would be a difficult task.

Maybe they are tied to systems that are not actually in the game? That would be one reason.

Interesting point; while I would assume all the needed libraries are there, I could picture some minor dependencies for proper operation getting missed as incomplete/broken content was excised just prior to release.

There’s a potentially really good game in there, but I’m waiting to pick it back up as the bugs hurt my immersion.

Maybe they are tied to systems that are not actually in the game? That would be one reason.

My assumption is they would not release a game where they had a perk that say let you fly or turn invisible when such things were never implemented. I consider a bug when you have a piece of code that is supposed to work, but has some flaw in it causing it to work improperly. However, if its not even implemented: void turnInvisible() { // TODO: implement functionality }
Then that is fraud. They least they could do is disable the ability to spend perk points on perks that are not even made yet.

Anyway, I do want to replay this, but only after the core gameplay has been mostly fixed. I was hoping I could do another run during my christmass break, but at this pace it may be years until its ready.

That is really my biggest heartburn with this whole fiasco. There is something like 2 or 3 dozen perks that either don’t work or don’t work correctly still lingering out there. Stuff like add a percentage to something… I can’t conceive of why something like this isn’t fixed yet.

Do you need perks to beat and/or enjoy the game? Nope but it does detract from my enjoyment of running through with different builds.