Bought this one on the XBox Series X a while back on a nice amazon deal ($17 - used), but bounced off it pretty hard. Not because of any bugs, but just because I wasn’t in the mood for a dystopian cyberpunk game.

Will eventually come back to it I think. Just needed something a bit lighter and less involving.

Mind you, I am not alleging that this is the case, only suggesting it may well be one of the reasons. I believe some of the perks in the game at release, like the one referencing using human shields, were tied to systems that were not in the game (as in, you could not take an NPC as a human shield, hence a perk for enhancing that ability was sort of null). But I do not know where the game is at this point on stuff like that. And it was seemed a lot more like an “oops” than anything intentional.

I can’t conceive of why something like this isn’t fixed yet.

The only explanation I have is that there’s just that many bugs higher in the priority queue. Which really says something about the state the game was in when it shipped.

Curiously, apart from the start and end of the main story, the game itself is rather light-hearted. Nothing says cyberpunk like helping the cyber police to deal with some punks!

As an aside, I’ve been re-re-reading Gibson’s seminal cyberpunk trilogy (Neuromancer, Count Zero, Mona Lisa Overdrive) and one, it still holds up amazingly well; two, Gibson can freakin write; and three, it’s clear that translating the mix of grit, glitz, and gore that lies at the pulsing neon (or maybe LED) heart of cyberpunk to a game space is not easy. The Deus Ex games did perhaps the best job of it overall, though I’m sure there are other ways to look at it. Cyberpunk 2077, all discussion of its other characteristics aside, nails a lot of the visuals, but little else about the genre in my admittedly biased opinion.

I think Shadowrun games do a good job too. It complicates things with magic which is probably a bit excessive. But it successfully presents you a world where some people have problems transcending beyond the human shell and some have nothing to eat and suffer from organized crime and corrupt police.

Latest Deus Ex (Mankind Divided) was a letdown in that regard. They’ve tried to show a cyberpunk future in an old city instead of skyscraperland, but failed properly showing Prague (it felt like a faraway boring suburb of a European city. Maybe that was the idea but I’d expect them to show great bridges and cathedrals and monuments contaminated by technology, not some sleeping quarters) and dangers of technology. The game talks about the divide but you personally almost never have to face oppression or bigotry even though you play as the most augmented person in ther world.

CP2077 looks right and the ending is properly dystopian, but for the most part it isn’t. It really undermines the main conflict and the character of Johnny Silverhand, who talks as if the world around is Bladerunner while it’s no more depressing than GTA cities.

Curiously, apart from the start and end of the main story, the game itself is rather light-hearted. Nothing says cyberpunk like helping the cyber police to deal with some punks!

I found this quite surprising in my time with Cyberpunk 2077. Not only is the world filled with radiant missions of helping the police gun down people in the street in an extrajudicial manner, but at the beginning of the game during the cinematic car ride with Jackie you watch as some police airship just slaughters people in the street and Jackie mutters, “Eh, they probably deserved it.” A lot of that felt tone deaf to play in 2020, but also completely misses the meaning of the punk part of the genre and the intentions of its godfathers.

2077 is a sharp contrast to the anti-authoritarian and anti-establishment storytelling template that Harebrained Schemes laid out in their excellent Shadowrun games.

Sure, it looks cool driving around in 80’s style cars in the neon-soaked rainy city, but sadly 2077 misses much of the subtext of the genre. It delivers the surface level aesthetic in spades

Not to mention that it makes you think you’ll have some cool encounters with those flying cop squads, but nope. Never seen again. Same with the combat medics.

I believe the elite cops do teleport in if you cause severe mayhem now. They patched that in later on. Of course you can just run two blocks away and they give up.

I believe the elite cops do teleport in if you cause severe mayhem now.

Right, but you don’t see the flying cop cars again.

Oh, that’s right. They have no way to have vehicles do anything but drive in a predetermined route.

This tone-deafness might be a sign of poor editing and overambition. Bethesda and Obsidian games often have this contrast too. Fallout 3 has a lot of poor and dumb writing and dialogues, but it also has very well written parts (like president Eden speeches). Skyrim is populated by the most boring people in high fantasy, but the lore and some quests are golden. Pillars of Eternity has interesting lore and evocative vignettes but also walls of boring text (the sequel is better but non-faction NPCs are even more forgettable). CP2077 has genuinely touching main story and ending, as well as some interesting quests like Jesus impersonator, but apart from that you have lolrandom quests about crazy taxi and remorseful cop who lost his turtle. Very uneven and unfocused.

There’s one side mission (the cyberpsycho in the clothes shop) where Maxtac show up and have a bunch of custom dialogue. I think they have one of the flying cars outside of the shop as well.

Yeah, they show up in the cop companion’s final mission too, as I recall. They don’t fly in though, they’re just there afterwards.

They’ve tried to show a cyberpunk future in an old city instead of skyscraperland, but failed properly showing Prague

Good point. I haven’t been to Prague in quite some time, but I do remember the city being a hell of a lot more interesting than in the game. I distinctly sort of remember stumbling back to the hotel one night with some friends after a long round or several in some sub-basement like beer hall. We ended up roaming through some ancient cemeteries, which in the dark and rain were pretty damn spooky. Well, not to mention the beer we had consumed didn’t help much I’m sure.

Oh, I’ve been to Prague. Well, I haven’t “been to Prague” been to Prague, but I know that thing, that, "Stop shaving your armpits, read the Unbearable Lightness of Being, fall in love with a sculptor, now I know how bad American coffee is thing… "

Real Cyberpunk is lots future-shock mixed with lots of noir.

Like everything else, what we ended up with was lots of surface imitation presented without understanding the muscle and guts underneath, all wrapped up packages calling themselves cyberpunk.

In short, all hackneyed copycat jobs by designers desperately trying to pull off “k3wl h4x0r” stuff that was hella cool when they were 14. CP2077 reeks of suburban kids, with braces and who never missed a meal, trying to describe what futuristic, gritty street life is like.

And I am paraphrasing myself here when I say, "That’s a good post " 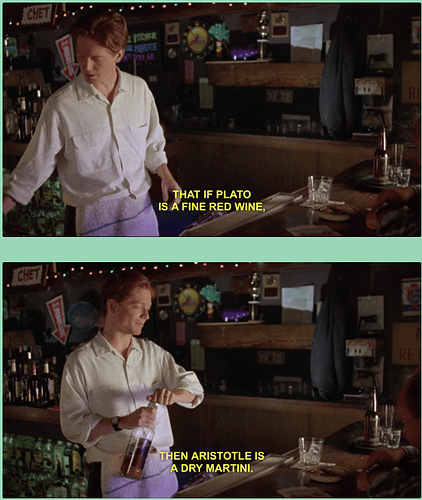