If som can you tell me which 4 skills you like to use with them? I have a lot of trouble deciding what to use and how they can work well together (what’s most useful).

You need to experiment and see what combinations work for you, for a given party composition and enemy type. Look for skills that make the enemy more vulnerable to other attacks, particularly Mark abilities. Something that may not be obvious is that for characters that have more than four skills unlocked you can switch between them when out of combat.

I’ve been a bit confused on stuns. It seems like sometimes the AI gets to go twice in a row after getting stunned? Or maybe it was other circumstances and I confused it, but when that happens it just devastates my group. So I got in a bad habit of always going for direct damage or heals and never doing stuff like stun. I should try and expand my repertoire here,

Except for certain bosses that get several action per turn, the only way to act twice in a row is to get the last action on one turn and then the first action on the next. If an enemy is stunned, the first of those actions would be skipped and the stun cleared, then they get to take the next action normally. Stunning enemies doesn’t affect turn order or gives extra moves.

@Dissensus do you use both of them in a mission together? If so, how would you suggest balancing out the rest of the team?

Like all things in this game, it’s situational depending on where I’m going and how far along I am. They work well together so party balance isn’t much of an issue: Occultist is the healer (or crowd control), Abomination is the tank (or damage dealer).

Early on, you probably need a stress healer to cope with using the Abomination at his full potential, so usually that means Crusader, Houndmaster, or Jester depending on the location (plus Crusader and Jester can do big damage against the right enemy which works well with the Occultist’s debuffs). But, with better trinkets and an upgraded hamlet, stress becomes less of an issue later so that gives you more flexibility when using him. Probably my go-to party—for the Cove in particular—is Occultist, Plague Doctor or Bounty Hunter, Abomination, Man-at-Arms. That said, the Abomination is pretty effective and versatile even in human form, so I usually only transform in a tough fight or near the end of the dungeon.

Im in agreement with @anonymgeist in terms of party comp. I really liked using the plague doctor with the occultist though (frequently with the abomination, iirc)…when not healing, both could act as artillery, and the plague doctor can correct any serious bleeding. The other crew i favored was crusader/vestal with highwayman and anything. The versatility of the various groups is a great strength of the game.

But I agree with you @jpinard , it is stressful entertainment, and even when i was playing a lot, i couldn’t do more than 2 or 3 runs before moving on to something lighter

I’m so glad you brought up stress healing. This is something I’m very very bad at. My last foray I “thought” I had someone who could relieve 5 stress in battle, but then it never gave me the option to do that when one of my people got all freaked out. Managing stress in my missions either goes ok all on its own, or it cascades out of control and it’s a wipe.

Thank you for writing all that up, I’m going to follow it when I try and play a little bit later and hope I can get a better handle on it.

Another little tip: disarming a trap relieves stress for the party member you have selected. The disarming skill varies between characters, but I find it’s often worth the risk to select whoever has the highest stress when I find one.

it might not be obvious either, but when you’re at the town, you can select which skills a character brings with them. All characters have…7 skills but can only equip 4 of them at a time. You can buy new skills in the guild(combat) or the survivalist tent(camping). To equip them, you need to click one to deactivate before you can select another. If you look at the screenshot below, you can see the skills i have (greyed out), but havent selected, versus the ones (camping) that i dont have that have the lock symbol on it. 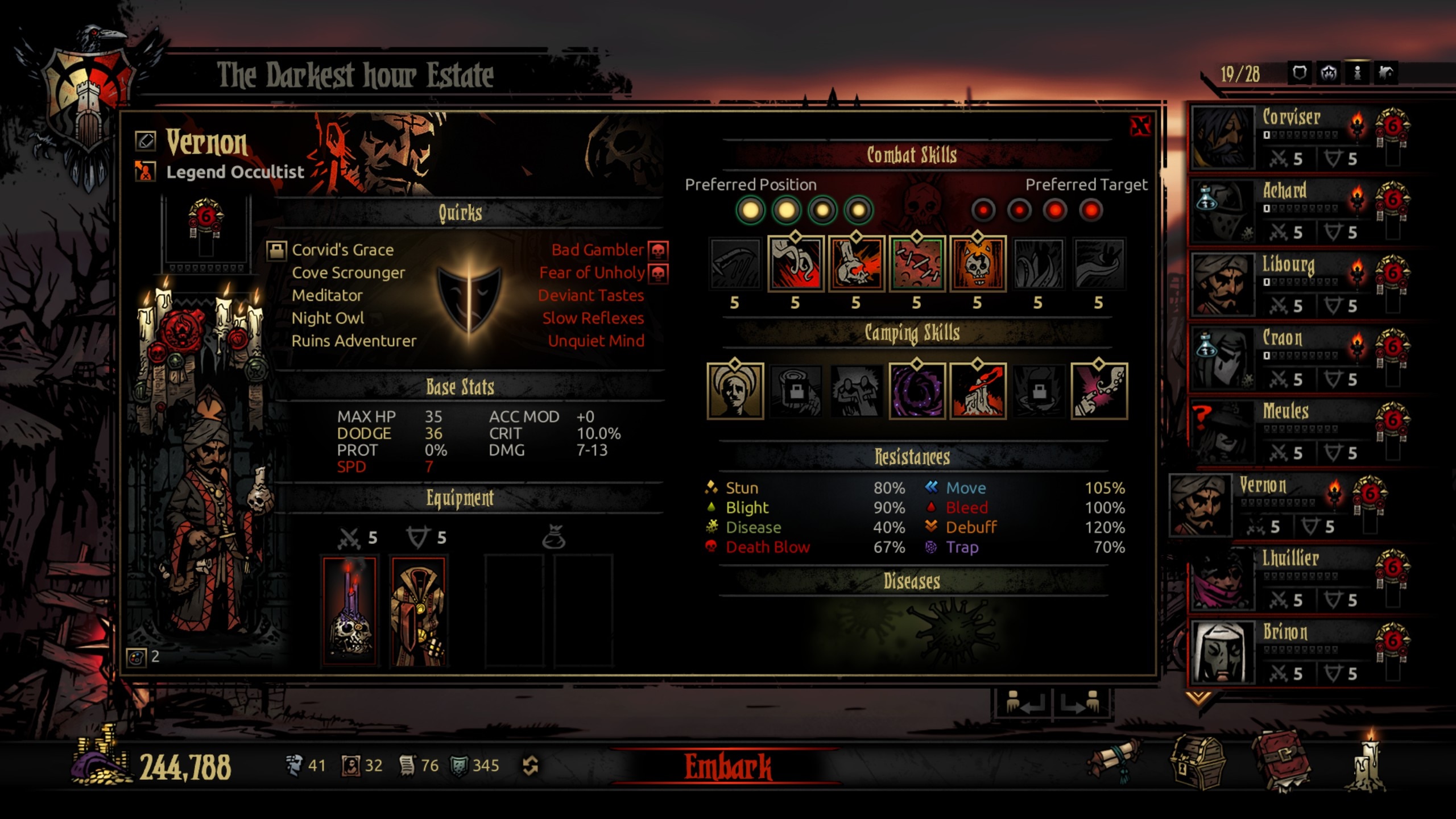 That guy has a lot of bad quirks. That’s ok? I’ve been tossing everyone out that has like two bad ones cause I thought they were irredeemable based on my income to get rid of them.

They’re all going to have bad quirks, if not at the start then eventually. There are ways to remove them in the hamlet, but unless it’s catastrophically bad and on a high-level hero, I don’t think it’s worth it, especially because they could get something worse next time you use them. The entire game is about making the best of bad situations though, so in most cases I think you’re better off getting on with them and soldiering through the bad quirks instead of endlessly churning them in and out. There are exceptions (if a hero has negatives to dodge and speed springs to mind), but generally a few bad quirks on a hero are nothing to get too worried about. The perfect hero doesn’t exist in this game.

Oh, kleptomaniac and light sensitive are super annoying early on too, but even those are less of a concern later when you have more money and better stress relief (and light sensitive isn’t even a burden when you want to do dark runs for more rewards).

Also, it’s frequently not one or two bad quirks are a problem. It’s four or so working together that makes a hero difficult to use (e.g., I once had a hero whose quirks made it nearly impossible for them to go anywhere in town to relieve stress), which you won’t find out until you’ve leveled them quite a bit. So that does lend some credence to the school of thought that says to boot ‘em quick if they start taking on too many problematic traits. But, again, they’re all going to have bad stuff.

Which I enjoy a lot about the design. The TTRPG it’s heavily inspired by (Torchbearer) makes the point in its introduction that the kinds of people who would actually do RPG-style adventures and dungeon crawls would only be doing it because they have no other viable options in life. You’re not getting the best and brightest for this kind of work. So, it feels appropriate for a vestal kicked out of her order for being a sex addict who likes shiny things and a bounty hunter too drunk to collect his bounties to be the ones helping an eccentric person from a cursed bloodline reclaim their ancestral estate from monsters.

Oh, no kidding? I did not know this. The devs have said so?

I’m pretty sure they have. It’s pretty blatant, so it would be kind of shameless if they haven’t.

Am I going to run out of short easy missions as the number goes up? For this round in the Warrens everything is medium length now, but I’d like to keep doing short easy stuff as I continue to experiment. The Warrens has a level 2 next to it now instead of 1. 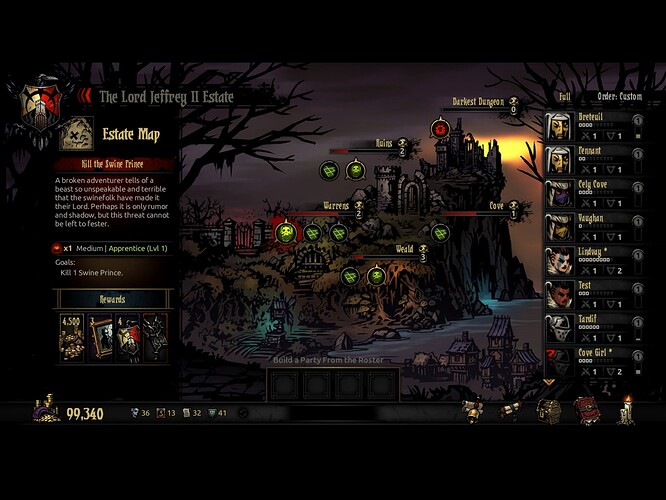 Holy cow you’ve got a lot of cash!

Should I get the districts for the bank yu think? And leave the other DLC stuff out so I can get interest?

The variety of quests offered depends on your available characters. As they level up you start getting higher difficulty quests, but as long as you also have low level characters easier quests continue to show up (and higher characters refuse to go on low level quests). The numbers and red bars on the screen show how many bosses you unlocked, so for the Cove you don’t have a shot at a boss yet, until you do more quests there and the bar fills up.

Districts are intended to be a way to spend heirlooms once you finish upgrading the main buildings. Focus on town upgrades.

Ok thanks, that helps a lot!

I wanted to ask about stress in the game again. Stress is the little white squares at the bottom right? So when it gets all empty squares it’s one thing and then when it’s all solid white it’s another worse level? Is that how it works?

One thing that confuses me is when I take someone who can (in battle) lower stress by 5, but when I do that, I never actually see the white squares go down. Are they supposed to?

The squares each represent more than one stress point. The characters have a numerical stress meter, too, do you never see that go down?

The squares each represent more than one stress point. The characters have a numerical stress meter, too, do you never see that go down?

A numerical one too? All I’ve ever seen is the little white squares along the bottom. Not sure if it’s an iPad thing?

Each of the black squares represents ten stress. When it gets to 100, get a resolve test, which usually makes the character Afflicted (bad), but sometime instead makes them Virtuous (good). At level higher than 100, the squares get filled, until it reaches 200 (very, very bad).

The tooltip on the stress bar show the exact number, but again I’m not sure if it works the same on a touch screen.

After my last run I got this message for the week but I’m not sure what it’s trying to tell me. Is that a bonus I get for free for doing a new mission? Or am I supposed to find that mission somewhere? Nothing seems to match it. 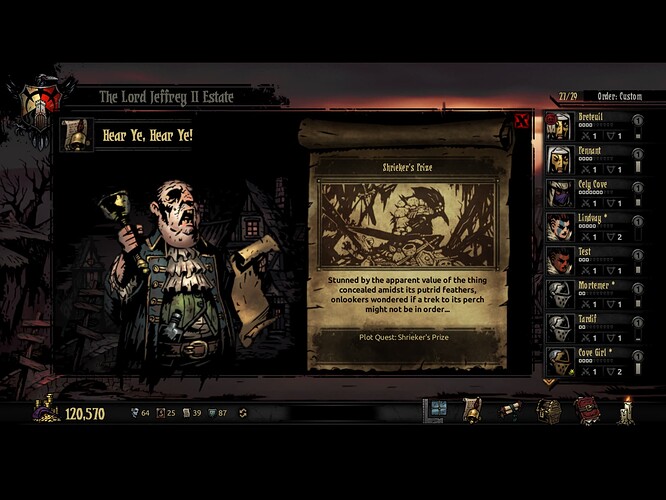