My memory is crap about these things. The enemies list their attacks when you discover them which is nice, but I want to remember what position they make them from, how much damage they do, etc… At least the attacks list their special effects.

The Red Hook guys have talked a little about this, there being different philosophies about information display within the team…but a lot of it just came down to the sheer quantity of information they wanted to display.

In this episode, Soren interviews independent game developer Tyler Sigman, best known as the designer of HOARD and Darkest Dungeon. They discuss how whether it makes sense to hide game data in the …

I’ve tried to get into this on the Switch, and my first impression is a bit similar: I like the idea, but I am not sure if I like the game. I have not really played enough to make up my mind yet, but I feel like the controls are wonky and that there is a lot of busywork. I’ll stick with it and see if I grok it a bit better.

I think games like this that make you take notes are stupid. If I’ve seen it before, display it in the future, don’t make me memorize it or write it down.

So I just use the wiki. I’ll be fucked if I’m going to remember which item does what for each trap/object.

I just grabbed the iOS version (it’s on sale for 1 buck right now) and the first impression is that it is very rough: the interface is the PC version, no effort has been made to make it touch screen friendly, which means you are playing in “cinemascope”, about half of the screen space going to waste, and that the fonts are small. The whole interface itself being quite small, it ends up feeling finicky on a standard iPad screen.

I’m trying to finish the game at least once. I mean, I’m a backer and I love the idea. Managing both health and stress works really well. I really, really like the mixing and matching you can do with heroes. You can specialize your team for durability, loot, damage against certain ranks, status effects, etc. But even on “easy” or radiant mode (which doesn’t really make things that much easier, by the way), it’s a hell of a grind to go through.

And remembering what curios do is important, but it’s the least of the things you need to remember. Which areas have monsters strong against bleed? Blight? What’s each boss’ gimmick? Because if you have nothing against the last row on a last row boss, you’re toast.

The DLC does not help much either. The districts are super grindtastic buildings that add (small) permanent bonuses, but you won’t build the first one before a dozen hours and even longer for the next ones. The color of madness DLC is an endless mode, but once again, you’re not going to get much out of it before you max out your town. So more end-level stuff.

The Crimson Court takes the cake though. It’s technically earlier level content, but as soon as you do the first mission, you set in motion events that make management even more of a nightmare. As soon as you go there, characters start becoming vampires, which despite what you might think has no real upside and which you can’t cure either. Infected heroes require frequent doses of blood items, even in town, and die without it. They can infect each other if they stay in the same buildings and regular monsters in every dungeon get gradually replaced by more vampire monsters that infect your party. I mean, they’re not boring ol’ vampires, they’re mosquitomen and mosquitowomen, which is brilliant, and the management of the infection is a great idea, but god is it more crap to screw around with.

Surprisingly, I think the Shieldbreaker is the best piece of DLC. She’s one of my favorite heroes, very mobile and versatile and she’s there almost right from the start. No fuss, just one new thing to play with.

So yeah, this is one game that does not want you to finish it.

So yeah, this is one game that does not want you to finish it.

Yeah, Darkest Dungeon probably has the title for the game I’ve put the most time into without seeing end credits.

Every once in a while I think about starting again, but then someone like you will come along and remind me of the grind. Thank you for saving me from another 40+ hours without finishing! If only I didn’t feel the need to restart every time, but I always do in this game and almost every other.

Every once in a while I think about starting again, but then someone like you will come along and remind me of the grind.

Me as well. I love DD but I think I’m done with it. Going through the game from the start is fun until you hit a certain point, and then it’s not fun, and the last time I started from scratch that wasn’t satisfying me much either, probably as it had been my fourth time through. I’m probably, sadly, done with this but I do like it a lot!

I mean, you are all playing on Radiant mode right? Because there’s literally no reason to play on anything else, it’s the same difficulty with half the grind.

I have several times, and never looked back, but “half the grind” is still waaaay to much grind, to me.

Radiant mode was fun until I got to the 2nd Darkest Dungeon. I had two complete party wipes of my best characters without even activating one of the crown things. I had already completed most of the rest of the content and leveled my hamlet almost all the way up. Repeating all that just to level up more characters was too tedious to consider. I had a blast up until that point, though.

I had a similar experience, except that the RNG gods smiled on me. My parties went into the final dungeon, and successfully hit 2? 3? of the final check points. Only to find out that there was still 1 more trip needed, which means I needed an entirely new party of legendary level adventurers. I forget how many check points there are in the final dungeon, just that it was at least one more than you would find in any sane game design. And at that point I realized I would have to grind for at least another 10 hours in order to have a try at the final boss, and bailed on that campaign.

I can’t really make sense of the DLCs for this game - which are integrated into the main campaign and which are new, parallel campaigns? I’m looking to get into the game proper after bouncing off a few times but I’m mainly interested in the main campaign to start things off.

I can’t really make sense of the DLCs for this game - which are integrated into the main campaign and which are new, parallel campaigns? I’m looking to get into the game proper after bouncing off a few times but I’m mainly interested in the main campaign to start things off.

They’re are fairly well integrated, but the vampire thing and color are both “new areas” if you want to avoid that.

There’s really no “new campaigns” in it, they just integrate all of it into one big thing.

And those new areas are more like endgame activities or can you enter them from the start?

They have increasing levels of difficulty, from easy to hard, like the normal areas. However… the real meat of the DLC is for higher-level heroes.

Ok, can I use my vanilla save that’s in-progress after I install the DLCs and use the heroes I have to access those new areas or do I have to start a new save? I’d like to give the game another shot, preferably without losing out on things, but at the moment I only have the base game and I’m basically wondering if I should wait until I have the DLCs (which might not happen that soon because I just moved to another country and don’t have the banking sorted out yet) installed or if I can just start playing.

Also, how’s the game with a pad?

You can enable the DLC individually, even in games already started before the DLC came out.

My best haul to date on a level 1 quest! 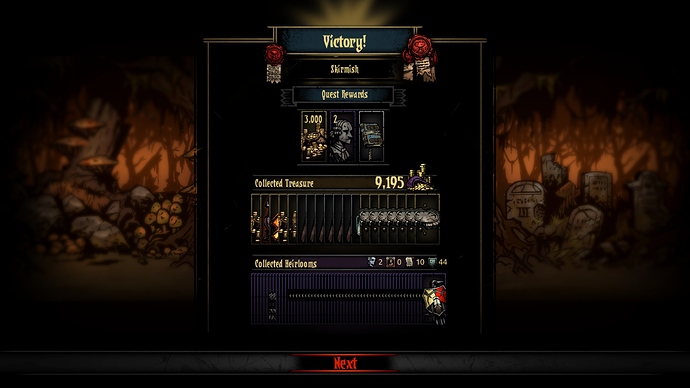