Have you made it to Crater Lake yet, Tom?

That’s the third community, right? That’s about where I’ve stalled both times. A whole new map opens up, with new characters and missions, just as I’ve completely depleted the map around the first two settlements. Each time, it’s somehow felt like “having to start over” instead of “adding more cool stuff”. :(

I will push on, but this latest time, I got caught in a Burridan’s donkey decision between Days Gone and Dying Light. I wanted to play both and instead played neither…

Is it the upcoming PC version you’re playing…?

Is it the upcoming PC version you’re playing…?

Ah. I’ve somehow reached a stage of ubisaturation where any non-Ubi game I might try makes me feel like the kids in the Simpsons where they emerge into the sunlight to play with pets and hula hoops.

In my mind Days Gone is that.

See, this is why I like the site so much. It makes me look up things I didn’t know and I end up more edjumacated.

Nope, that’s Big Mike’s. Crater Lake shows up the second time the map doubles in size. It’s also when the story gets really good. Sounds like you are still less than 1/3rd through the game. I’d recommend against spending too much time fully clearing out each region. Just do enough rep grinding to get the upgrades you actually want and focus on moving the story forward.

Isn’t Crater Lake where you rescue the girl from the ripper camp? Because I’ve definitely done that. It’s got a gift shop in front of it, right? Where you get her a geode earlier in the game?

Nope. Eliminating the Ripper camp at the Golf Resort is only the halfway point in the game.

The game is quite long, maybe a bit too long. The last 1/3rd could have almost been DLC or a sequel or something.

Finished this up. I ended up enjoying it A LOT more as things progressed. I think the overall riding, shooting, survival systems are sound and there’s a good ramp up in terms of challenge along with your ability as a player to deal. At the beginning of the game, I was struggling to take out Freaker Nests. Closer to the end of the game I was taking out Hordes. They weren’t exactly east, but they were do-able. So for the duration of the game I wasn’t really getting bored with the missions. That’s a significant win in my book.

Had some funny moments due to open world nature of the game.

I was in the process of clearing out a maurader camp. I probably had about 10 more guys to take out when a Freaker Horde wandered into the camp and took care of them for me.

There was another time when I had just finished clearing out a different camp when a cougar appeared and charged me. I killed it only to realize it was being chased by a pack of 4 wolves. I start taking them out when up the pass comes a Rager (Freaker Bear). I didn’t make it out of that encounter alive, but I did have a good chuckle about it.

I go ahead and say it. The sometimes goofy story ended up working for me by the end of the game. There were certainly some misses. I resolution of the Ripper stuff was weak with regard to Carlos. Was that supposed to be some big reveal. I also think the Colonel Garret was a weak, tropey antagonist.

I guess I’ll put this bit in spoilers…

I was surprised how well they handled the reunion of Deacon and Sarah. I figured he would find her at Crater Lake, but how they both didn’t immediately pick right up where they left off was interesting.
They were different people than they were before the outbreak and it took some time in the story for them to figure things out. That was a refreshingly mature portrayal of a relationship.

I even ended up liking many of the characters. Even Boozer.

There was decent closure and a solid setup for a sequel. Recommended!

Story wise it’s a bit maybe, hmm, too sort of Dickensian, not in the portrayal of wealth way but in the coincidences of character way.

Like one of these would be fine, but both was a stretch

Evil cult leader and big bad of first half of game Carlos was secretly ex-member of their biker gang with direct ties to Deacon/Boozer.
Deacon’s wife was directly involved with the virus development and cause of outbreak.

Yeah. The Carlos thing just seemed weird. I kept wondering if I was supposed to know this character from somewhere. They didn’t have to tie him in like that.

John Garvin, the former game director, posted this on Twitter (now deleted) in response to someone asking why he thought the game didn’t sell as well as it should’ve: 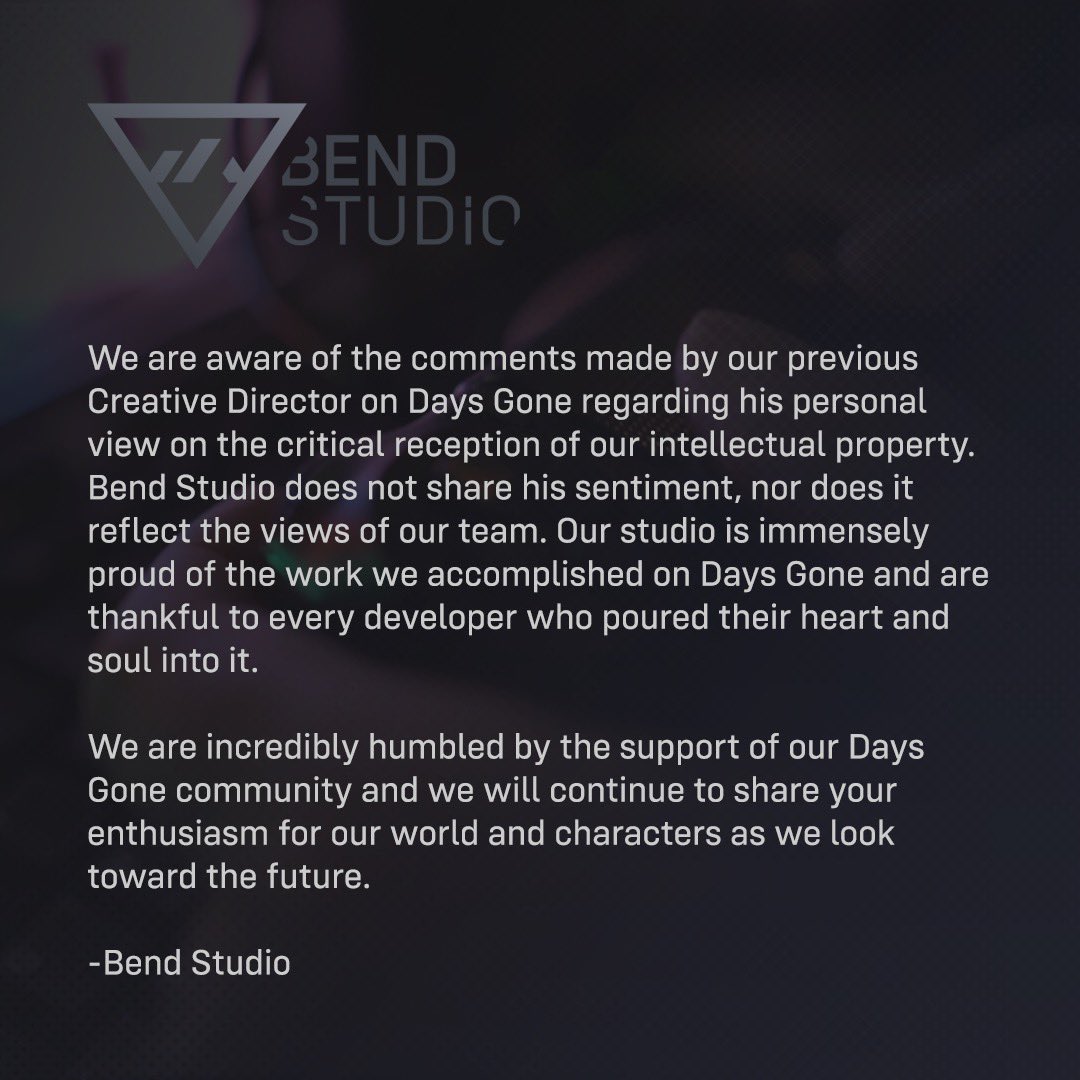 Hmm, from what I know about the people who work at Bend, and I have met a couple at least, I am not surprised Garvin is a former employee.

For the record, I can handle this.

That explains a lot about the godawful dialogue in that game, and especially the scenes that seem to be the work of someone who has no idea how adult men and women talk to each other.

Gameplay and mechanics were fine, and the environment pretty good, but yeah, dialog and human interactions were…not.

Why would reviewers bother to fully play an entire game that was so fundamentally broken upon release?

I own Days Gone on PC as a morbidly curious person that bought it at launch on PS4 and couldn’t get into it because, well, it was a fucking mess.

I dropped it and never thought about it again until I got it on a good deal for steam. Now, I don’t even want to bother. Though I am morbidly curious as to how bad it could be.

The game ran fine for me. It wasn’t, to me at least, a mess so much as a collection of missed opportunities and partially executed ideas. I finished it, and liked the general open-world roaming about and fighting stuff enough that I wouldn’t mind a sequel, but that level of modest enjoyment came at the price of enduring enough cringe with a capital “C” to choke an elephant, woke or not.