Great!! That is an excellent discount, too good to pass up… Happy birthday @Anklebiter!

Didn’t the last sale just end? Sure, now they have sales all the time, but back when I was into the game they had nothing for 5 months!

Guess now’s a good time to get back into the game then lol. Dust off that HOTAS, put on your VR headset and let’s go!

They need/want to cash in on Chinese new year. That market probably means a lot to them, as we have multiple Chinese planes and chinese cockpit labels for a bunch of others.

It’s been a long time since I flew, but news of the Ka-50’s new cockpit (released to the open beta branch) got me to fire DCS up again.

It looks lovely—a beautiful update for the old girl. And, as an added bonus, I still have my helo chops, notwithstanding that I got my startup checklist shuffled and took off with half the avionics powered off. 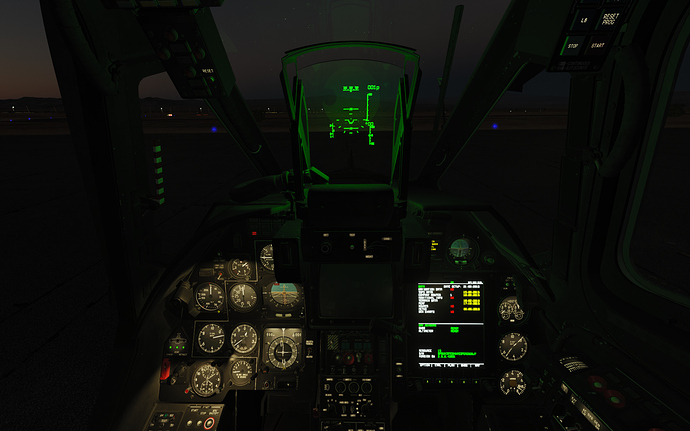 Starting up in the predawn darkness for a morning flight through Las Vegas on the way to blow some stuff up. 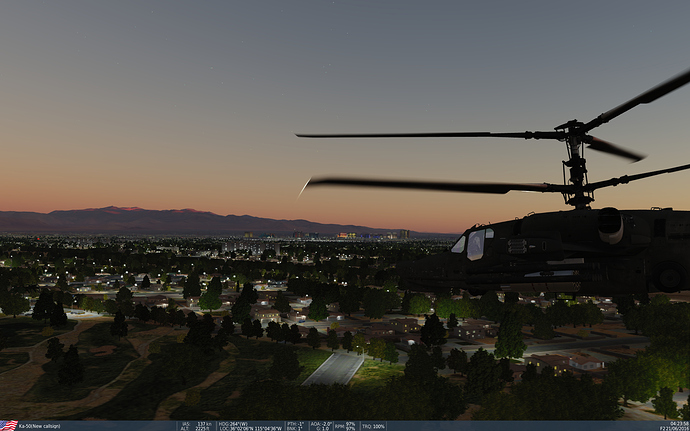 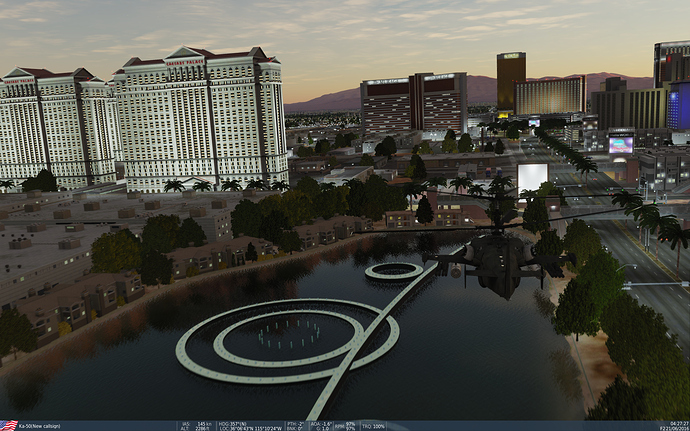 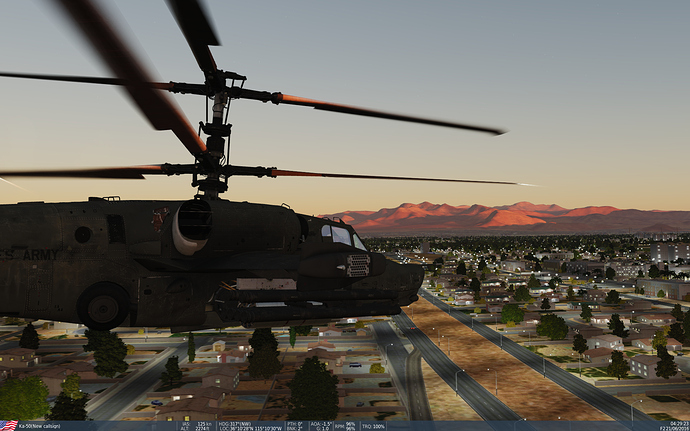 Not pictured: blowing stuff up. I had my hands full between flying and remembering a) how the guns work, and b) why there aren’t more single-seat attack helicopters.

Very pretty indeed! There’s a sale on, if you want to get into helicopters, now is the time.

I did take advantage. Four shiny new Helos sitting in my hanger for about $70.

My DCS collection will be complete with the addition of JF-17 and Viper. A few little planes and some WW2 birds are missing, but I’m cool with that. Over the past couple years I took heavy advantage of sales, buying only Hornet, Tomcat and Persian Gulf map at full price. All of those were worth it.

I’m nervous about MSFS2020. Microsoft has WAY more resources than ED. If they add combat to that, DCS does not look like it will be able to compete. I get that this is the way of all things software, but the high price of entry is enough to give pause.

On the Helo front, Blackshark does look fun. I like that you can fire your cannon and four gun pods at the same time. That is ALOT of firepower. I wonder which is more powerful, that setup or the A-10 supergun. I’m guessing A-10, but dunno.

Depends on what you are shooting at. The thing that makes the hogs gun so great is it’s tremendous muzzle velocity, giving it impressive armour penetration for a 30mm.

On the other hand if you objective is to spray a large area with 23mm, the four pod shark will do fine, but if you really want to do it in style, use a hip.

Is everything destructible in the game?

Some of the landmark buildings in Vegas aren’t. I dumped tons of bombs into the trump tower but it only smoked a little.

On the other hand, all of Dubai can be destroyed, given enough damage done.

I don’t think DCS has much to fear from msfs 2020. They are so different, they don’t fish the same pool.

On the Helo front, Blackshark does look fun.

The Ka-50 is an utter hoot to fly, and it’s by far the easiest of the DCS helos to handle once you get to know it. It would be my recommendation if you’re a rotorhead greenhorn.

The other helos are a little less exciting for single-player gameplay because there’s not as much to do non-combat in DCS (although there are a number of good missions for at least the Huey and the Hip; I haven’t done much with the Gazelle).

Any helicopter (and the harrier) provide nearly infinite fun in landing in different places.

Pick up a sixpack at the 7-11, then fly to your mates’ flat to pick him up, then up the highest tower to have a beer in the sunset, then to the beach, then to a parking lot, then to the airfield.

All you need is a map and a chopper. Hip and Huey are best for this. I haven’t flown a shark in ages, and re-started flying it again since 2.5.6 and it’s amazing. So easy. Yet NONE of my flights ended not in a flaming wreck. This thing really self-destructs instantly once you get out of the envelope, and with very little warning too.

I just took a new test of the Tromb building in Las Vegas. Stomped in at least 15 Mk-84 warheads. All of 'em hit, the building burned but did not go down.

Oh hey @jpinard, did you know you have a personal own plane in DCS? This is the Jeff, named after it’s designation’s letters: CAN BE INSTALLED IN OPEN BETA ONLY! JF-17 is a single seat, single engine, multirole light fighter that was joint developed by AVIC Chengdu and Pakistan Aeronautical Complex (PAC). The design phase of JF-17 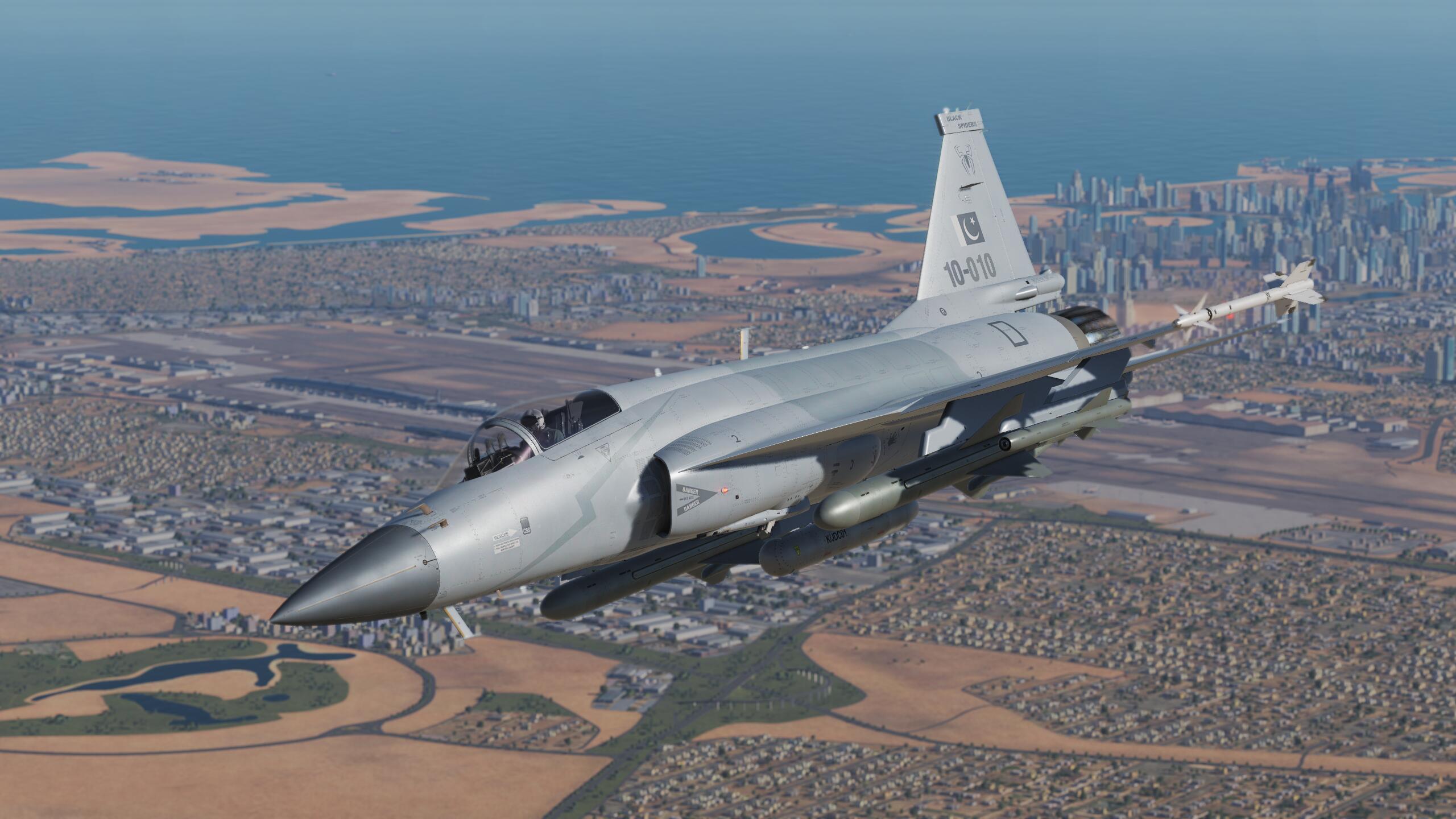 I have it, but I have like five minutes on it. Not nearly enough to say anything about it.

Speaking of flight hours, I had a good look at my DCS log book. Now it only logs flights you ended by returning to the screen, and not to the desktop. And I’m not sure how it deals with my missions where I set up multiple ‘clients’ then fly it alone, but get a menu to choose a plane from at the start. Anyway. I found that I need about 20 to 30 hours on a machine to become tactical with it, and about three to learn to fly one. Most of my hours are on hornet, which amazed me as it’s not my most beloved machine by a longshot. Huh.

I would love to see ED license the tech that is being used in msfs for the streaming scenery. Having the whole world to play with instead of the different maps would be amazing.

It would require some reworking, I believe—the DCS engine is a flat-earther, the last time I checked.

These maps are painstakingly handcrafted and debug. They take ages to build. There’s four in the pipeline that I know of: Guam, Dover, Syria and Los Malvinas.

Hotdamn I had forgotten how much fun the Ka-50 is. The power, the agility, it’s just awesome. And it sounds utterly badass, like the big badass gunship it is. It’s like a realistic version of airwolf, or blue thunder.

Getting back on top of it took me about three flight hours. I’m working back up to tactical next. Then I’ll be flying campaign with it. What is the best one you flown, @Fishbreath? 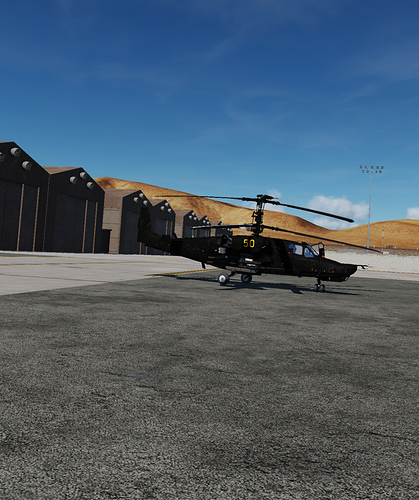 I haven’t tried anything recent, but the Deployment campaign which comes with the module is widely and correctly regarded as one of the best. It has a wonderful variety of missions, from vehicle-hunting with Vikhrs to convoy top cover to some well-disguised piloting/systems skill challenges.

Cool deployment it is then, and after that memories of a hero, that sounds delightfully silly.

Today we're very excited to announce that the papers have been signed & the ink is now dry: we are ready to unveil our latest project.