I’m not able to try it right now, but I’m sitting on an old Black Shark 1 key that I bought from IGN back in 2010. After navigating the tech support maze on the DCS site, it appears that the upgrade from BS 1 to BS2 may be free now for non-Steam accounts (DCS previously charged for this ):

Unfortunately, the rest of my DLC collection is on the Steam version and as near as I can tell, DCS only offers one-way account conversion to DCS from Steam, and not the other way.

So convert the rest of your stuff from steam and live happily ever after.

Oh, I went to Japan and forgot all about this! I will contact them soon.

So convert the rest of your stuff from steam and live happily ever after.

You know, I don’t think I realized you could do that with your whole collection. I thought it was limited selection of stuff.

used to be but they sanitized their shit and now it mostly just works. being not on steam but using this as a launcher you have faster updates and more control over what, where and when. Also, your dollar now pays for DCS, not one third steam.

I have been having not nearly as much fun with DCS as I planned to have. First off, something somewhere has made the F-4E into superman, and the Mirage2K Red Flag campaign has a lot of those as red air. It’s been kicking my ass.

So then I went and had another go or two at @Anklebiter latest creation. Turns out I let my ability to land a spitfire without bending it atrophy beyond anything useful. So that sucked (and also ruled because it’s fucking hard but also doable with enough patience and persistence and then you feel like douglas bader himself.)

Yeah I gotta say, they did some real magic with the Spitfire in DCS. Eagle Dynamics seems to have just nailed the feel of flight more so than any other Spitfire iteration I’ve tried. You are in a high performance propeller driven airplane with raw power to frak yourself up or your adversary depending on how closely you “listen” to the airframe… and it gives all sorts of subtle queues. Amazing how well solid physics come through the simulation.

Spit shows up in exactly one Time Pilot mission. Really debated that considering the higher module requirement for entry, but decided it was a gem and worth it.

Speaking of Time Pilot, for the two people who might be interested, we are on mission 14 now with the milestone of being able to play the full campaign in sight. From there will be polish and more polish.

We’ve tried to provide the “best of” for a number of planes while keeping the learning curve low. In order to bomb the crap out of dozens of Tiger tanks in an A-10c, for instance, you won’t have to know how to operate three radios, or how to input your own complex coordinates. No cold starts in the campaign. You will have to know how to fly, and fire the weapons famously used by each jet.

Not that it will be a cakewalk, especially towards the end. We’ve tried to move the challenge to fighting Natzys, zombies and rogue AIs with killer jets rather than fighting to hold a 300 page manual, and I think it is working out OK.

Each of these are just so much fun to fly. Making this has been a blast.

OGDEN — A Russian is jailed in Weber County, charged with smuggling F-16 fighter manuals to Moscow and trying to obtain guides for other front-line Air Force jets.

Yikes. If he’s primary programmer that could be it for the company.

I wonder if the Fighter Pilot podcast is going to sever links with ED now as this is really bad publicity. When Wags was on he made it abundantly clear they avoid using sources that could put personnel at risk and along comes a dev getting cuffed by the Feds. This is all around very bad news for the hobby.

He said he would like to acquire F-35 and F-22 flight manuals and he “could guarantee that these manuals will not be provided to any third party, and I think even not shown to anyone in our company.”

Hes not, in fact the primary programmer, Dr. Tishin, died about half a year ago of a common but deadly illness.

This happened quite some time before the fighter pilot podcast. In fact this puts wags’ emphasis on their handling of classified materials and the strong new riles they implemented on their forum in a new light.

The dude in question is not the head honcho. But he is important. Eagle dynamics is not a 500 person outfit. Everyone is important.

Only some buildings are destructible. Ammo dumps and whatnot have great secondaries too.

I haven’t gone after a tower, but I would expect not. After 9/11 they got really sensitive about letting airplanes ram or blow up skyscrapers.

You know what, I was wrong about this. Wonderfully and unexpectedly wrong.

I was working on campaign just now and I brought down the biggest building in the game, Burj Khalifa. First smoke and fire and then total animated collapse. Not super detailed, but not at all bad!

This is a nice surprise. That Persion Gulf map has Dubai fully modeled with some of the biggest buildings in the world. Full on Game of Thrones potential here! 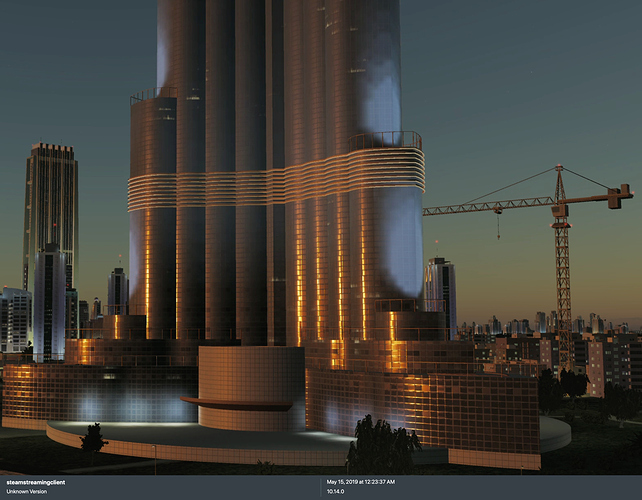 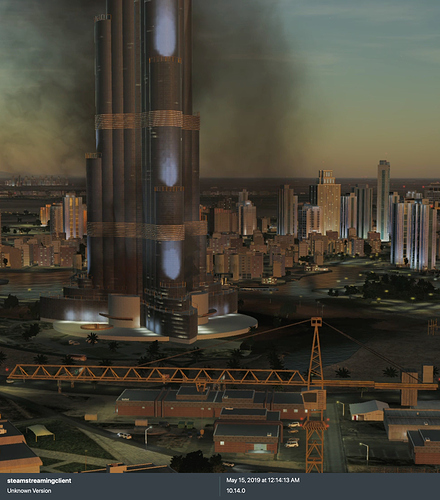 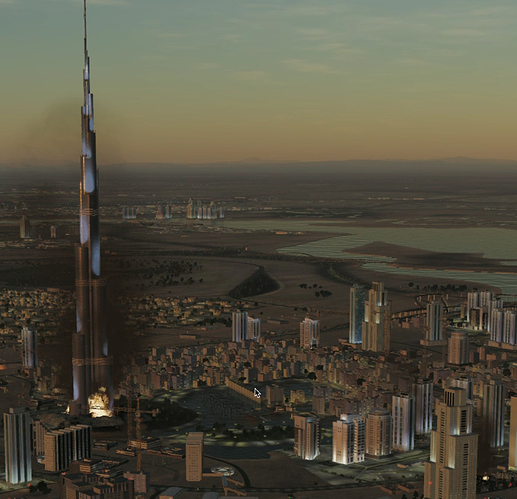 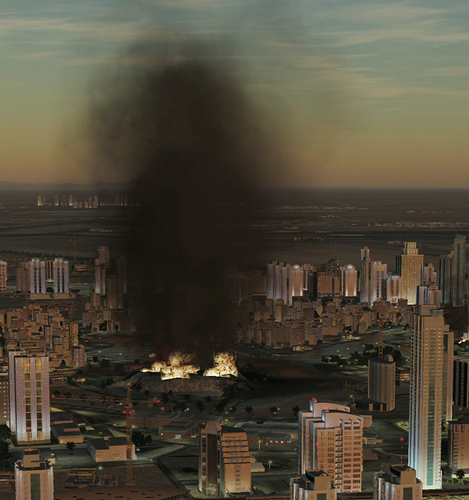 <.edit> Fuck yeah baby! four big 'uns blew that fucker to paradise! That opens the door for some truly apocalyptic anticapitalist action versus the evil sheikhs across the gulf. It’s a short hop at the sort of speed a tomcat does, even hauling four one-ton packages.

I bought a 10cm extension for my stick. Yes. An enlargment. Very funny.

First i tried getting my hands on materials and tools to make it myself but thar turned out to be almost as expensive as a bought one so yeah.

Anyway, it works deliciously. The stick no longer works on a desk, so I put it on a box in front of a lowered chair with the throttle on another box next to it. The extension also allows the handle to be mounted slightly twisted to the left, making for hugely improved ergonomics. 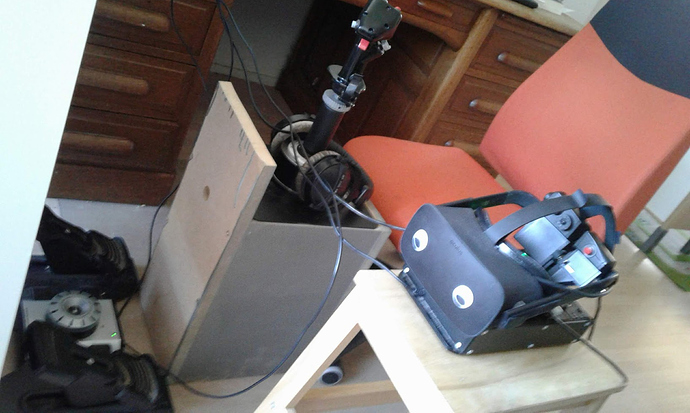 Precision is great! That first 5% of the movement range comes into play now, and its far easier to control with the longer lever. My gunnery, already fairly good is improving further. Landing are sweet as pb&J according to jester.

I’m now awaiting delivery of a kit to replace the ministick on the throttle. This is an analogue nub, like the one in an IBM/Lenovo laptop and it fucking sucks. The replacement is the same thing as found on a ps4 controller. Said to make for excellent precision and control. Just in time for the projected june release of the F/A-18’s targeting pod.

I bought a 10cm extension for my stick. Yes. An enlargment. Very funny.

Who the hell came up with the name “joystick” anyway? And the company Thrustmaster? For crissake I don’t know which is worse, naming it for the tee-hee 12 year old boy humor, or not realizing the connection.

It’s been around since at least 1910, and appears in the diaries of early pilots.

If I had to guess, I would guess they they coined it by ribald analogy.

Having a bigger stick sure does matter!

I refuelled the harrier while the tanker was turning and just bagged 8 messerschmitts in one mig3 flight in il2!

ED developer gets arrested for dealing in F-16 manuals. ED says none of that documentation was used in studio. 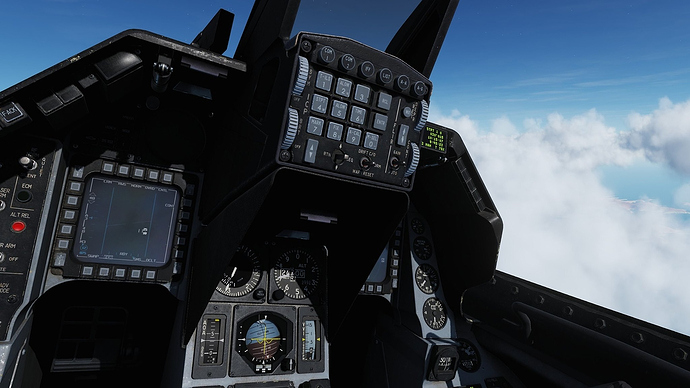 Hell, I am bloody excited, that is my favourite combat jet of all time. The cynic in me wonders about the timing of the pre order and the recent “scandal”. Are they looking for an influx of cash?

It’s all academic of course because there is no way my lizard brain will prevent me from pulling the preorder trigger come May 22nd. 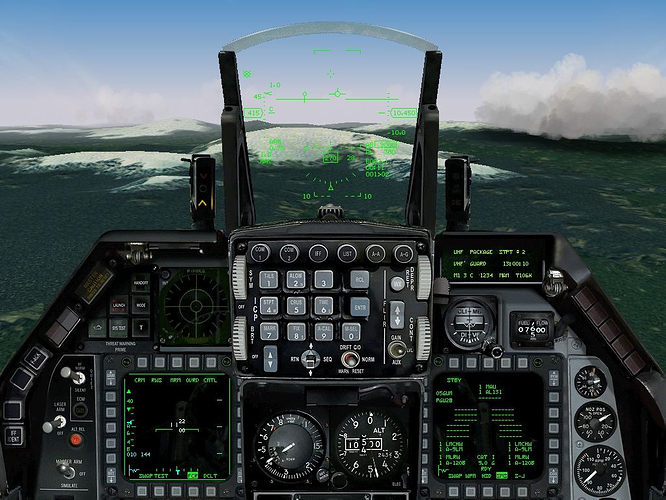 Really… The viper. Hell yeah. It’ll be like coming home. My first sim was Falcon AT on an Atari ST. Played the fuck out of that as a kid. Then I wasted countless hours that should have (and as far as my parents knew were) spent on homework in highschool on Falcon 3.0. 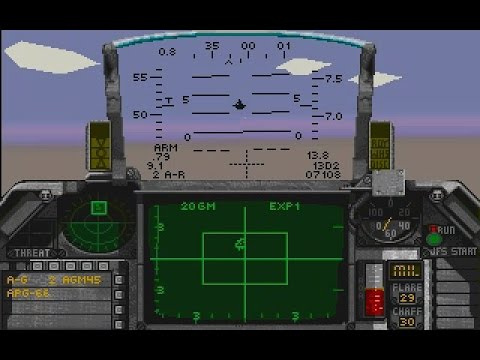 That pit. It’s my home. My happy place. I’ll be overjoyed to return to it once more. 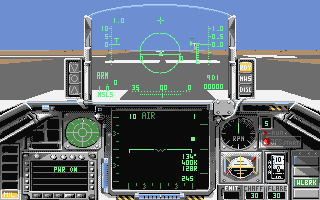 Funny how this coincides with vipers slowly fading from the skies over my house. They are slated to be replaced by the F-35 in the coming years. The upshot of that is that they rage ever harder in their last months :D 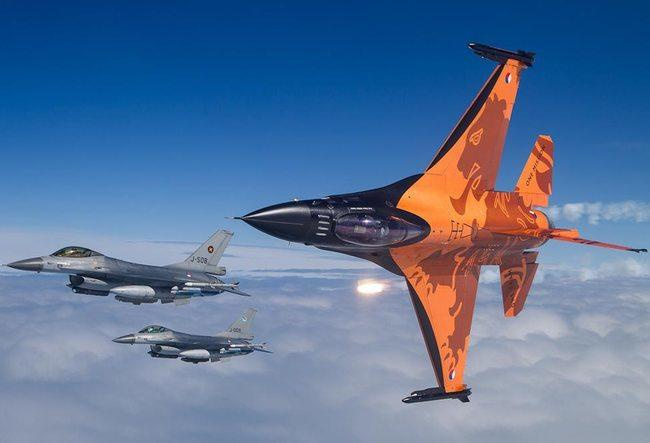