Hah, more or less you are right, as I needed almost 100 hours to beat the game on Hard mode (BC1). Don’t think I’m the bestest at this game.

I’m just saying, there is a big gap of difficulty between BC0 (Normal) and the rest of difficulties, and also, before an update the game BC0 difficulty was actually kind of how BC1 is now.

I was just being snarky, I just assumed everybody here has already done everything a hundred times while blindfolded.

It took me awhile to figure out why the difficulty wasn’t going up on subsequent runs and I could not find an option anywhere to raise it. But by chance I happened to hit the button as I was passing all the jars full of my loot when it gave me the option to do it there. So now I’ve been trying the harder difficulty with the boss stem cell that I found.

Oh and the new ability is kinda grody!

I’m glad to hear it isn’t just me who is terrible at BC1. I really love this game, but I feel like I’m back in the days of playing the first level of Castlevania a million times and never seeing anything else. I have managed to find a couple of the side areas though, which are really cool (and also hard).

The extra challenge really makes the equipment and abilities mean something, though.

I still have to return to this game…

There was a new update yesterday, look: 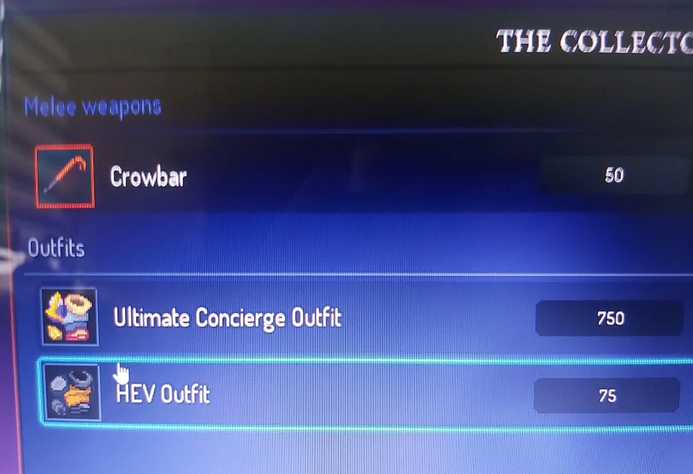 And another bigger update is in the Alpha branch, with new affixes and mobs!
https://dead-cells.com/patchnotes#v18.0

My playing kind of dropped off after I beat the game for the first time. The game was just too hard with the Boss Cell, and without the boss cell, I was able to find the other levels in the game, so once I saw everything, I didn’t feel the drive to come back.

I did want to find out why that huge thing escaped and where it went, and what that giant thing is that they added at the start of the game, where it has escaped past a lava pit that I can’t get past, but I can’t figure out where to go or what to do to advance that story.

Likewise. Playing the base game feels like spinning my wheels now, but I can’t make any progress with the boss cell active. Wish they had done a more gradual difficulty ramp up, but oh well. I got more than my money worth out of it and have plenty to play.

If you were waiting for the day you could play this on Android, that day has finally arrived.

Some balance changes coming in the next update:

This is similar to what I did with my mod.

So can someone spoil me, the new boss they added to the very beginning who breaks through the wall into a lava area, how do you go after him? Is it even possible without activating boss cells (which I’m not interested in, game is too hard and not fun with a boss cell active)?

So can someone spoil me, the new boss they added to the very beginning who breaks through the wall into a lava area, how do you go after him? Is it even possible without activating boss cells (which I’m not interested in, game is too hard and not fun with a boss cell active)?

To access it, the player needs to have downloaded the Rise of the Giant free DLC and to have beaten the Hand of the King at least once. The player must use the Homunculus Rune to bring the Cavern Key, which can be found behind a large hole in Prisoners’ Quarters, to a portal found in the underground section of the Graveyard. Upon unlocking this portal, the passage to the Cavern will remain open forever.

An additional path to the Cavern exists in the Slumbering Sanctuary, but it requires the player to have beaten the Giant at least once and to have 2 BSC active.

I see. Thanks! I’m not sure if I have the Cavern key or not. I’ll have to check that out. If I do, it will still be hard as hell to reach Graveyard. I don’t even remember how I got there, but I only got there once, and was instantly killed. (But I still got the achievement for reaching Graveyard, yay).

You have a nice map here!
https://deadcells.gamepedia.com/Biomes_Map

You fight against the Beholder boss, and in the intermission part between levels, you wall jump until you reach the door for the Graveyard.

I can’t believe this game is on Android. I wonder how the touch controls are. Trying to imagine playing it on my phone…

Oh wow, lots of new areas in that DLC. Maybe I should get that after all. Not being able to make any progress in BC1 had kind of turned me off spending any more money on the game.

Edit: Oh yes, no wonder I’ve only been to the Graveyard once. It requires beating that giant eyeball boss. I’ve always lost that fight, except for the one time.

Happy about the balance changes. I can beat bc0 easily but still have trouble with and have never beaten bc1 despite having lots of upgrades to my forge.

Happy about the balance changes. I can beat bc0 easily but still have

Yep, I’m in the same boat. These changes sound like a big improvement.

Just an FYI to anyone new to this thread, the game came out and is no longer in Early access.

I did a run on the PC (Win10 - Game Pass) version yesterday. That one is in such a weird state because unlike the Xbox version, I didn’t unlock many of the weapons yet. And for some reason I still haven’t found the power to smash the red symbol floors yet, even though that was one of the first powers I unlocked on the Xbox version. I don’t even remember where I found that anymore. (Don’t worry, I’ll find it by accident some day).

Anyway, the run last night was amazing. The default weapon I was given was the Nutcracker, which is a slow ass weapon that I hate. But I think at some point in the past few months since I last tried it, they must have tweaked it. Because now the weapon can’t be interrupted. And I can’t tell you what a HUGE difference that makes. This run was so different from all my other attempts. I still get hit a lot, but since I don’t get interrupted, I still kill the enemy even if they manage to hit me. And over time, I got better and better at the timing on when to press attack. I still can’t avoid hits sometimes, but I avoid a lot of them now.

Anyway, if you haven’t tried the Nutcracker for a few months, give it another go. It feels way better now, even though it’s still a slow weapon.

Well, good time to play again as the 1.9 update has just released

Lots of items & weapons have been nerfed or boosted, with the goal of opening up a wider range of builds, while not sacrificing what made the previous meta builds fun. If you want to know exactly which items have been changed and how, check out the patchnotes (link at the end of the post).

The biggest change that we’ve made is that all the crossbows are now two-handed, have two separate attacks and are Survival only. This lets you take advantage of the bigger health pool to make up for their slower fire rate but hefty damage. We’re going to add some survival mutations to support the crossbows, but we’re just waiting to see how they perform instead of rushing out mutations that will need to be changed right away.

The crossbow changes are:

We’ve also added a backpack that lets you hold a one-handed weapon (but not use it) while you’re holding a two-handed weapon. This way you can change to a cool one-handed item that you find on your travels and you won’t have a useless empty weapon slot.

There’s been a few economy changes in this update too, in short, we wanted to make pricing easier to understand and to allow players at higher difficulties to still be able to change their gear at merchants without spending all their money in one go.
While everything seemed to be fine at low difficulty levels, it got worse and worse in the higher BCs, where if you wanted to buy healing you would have to basically never spend any gold on anything else.
Now, those players will be able to change their approach in the middle of a run without worrying too much about being able to afford health later.

We’ve removed scrolls from ++ and S weapons, but to compensate for this we’ve added more scrolls to the early biomes, enemy damage has been reduced and gear damage has been increased.
This change was made to give gear level more importance again, and in tandem with the economy re-balance it will give you more opportunities (and an incentive) to switch gears during your run.

Damage over time effects were getting a bit of a bad rap for being indistinguishable or underwhelming, so we decided to try and give each of them a unique identity and in the process we added a fourth one, ‘shocked’. Most electric weapons and items will inflict this new shock DoT.

The difficulty curve between Boss Cells has been smoothed out, so difficulty spikes should be less of a problem. Yes, 2BC shouldn’t beat you up and take your lunch money anymore, well, not as much anyway.
We’ve also tried to make 0BC more challenging so new players learn more of the combat styles and to let them collect more gear/runes before progressing to the next difficulty level. Basically we want to stop them beating the ‘tutorial’ too quickly and then just getting smashed.

Damage mutations (those who give a bonus DPS to your attacks) suffered from poor scaling, making them extremely useful at low difficulties while being less and less useful as you progress through the game.
To remedy that, we changed their effect from a bonus DPS to a bonus % of damages. This means that everything that boosts your attack (item level, item rarity, affixes, etc.) will synergize with those mutations.

For example, the Combo mutation used to work like this

And finally, maybe the most important change of all:

The difficulty curve between Boss Cells has been smoothed out, so difficulty spikes should be less of a problem.

I wonder if 1BC is worth trying again or if they’re full of shit.

We’ve also tried to make 0BC more challenging so new players learn more of the combat styles and to let them collect more gear/runes before progressing to the next difficulty level. Basically we want to stop them beating the ‘tutorial’ too quickly and then just getting smashed.

I didn’t find 1BC hard because I didn’t unlock enough stuff yet. Everything, and I mean EVERYTHING was already unlocked by the time I tried 1BC.