It seemed considerate to make a separate thread about the politics of this years World Cup, so we don’t end up discussing these things while people are trying to enjoy a game. (thread)

The Guardian suggests that at least 6500 migrant workers have died during the preparations for the World Cup. Reports across the press suggest that overwork and a lack of protection from the heat has played a major part, as has suicide and preventable accidents on jobsites.

Qatar is one of the world’s richest countries relative to population.

The circumstances surrounding Qatar being awarded the World Cup has led to accusations of corruption.

Qatar does not support freedom of expression, freedom of assembly or freedom of the press, and there have been cases of journalists being harassed while reporting from the World Cup, while ordinary fans are being turned away from stadiums if they wear anything that looks like a rainbow.

Likewise, teams have been warned off wearing “One Love” captain’s armbands to display their solidarity with LGBT groups.

Homosexuality is a crime in Qatar, punishable by 1 to 3 years in prison and legalized torture. Extramarital sex is punishable by death if you’re muslim, but the good news for equality is that that’s true whether you’re gay or straight.

In spite of all of this, FIFA wants us to believe that having major sports events in these countries has a positive influence on hateful and oppressive regimes.

My own take is that having major sports events in these countries has a positive influence on FIFA and their officials wallets.

Yes, but its FOOTBALL, the worlds most beloved sport, so everyone will just forget about that stuff sooner or later…

what if in 2026 a country, or group thereof, decides they want to represent a group/some values we dont like?

“Homophobic stuff” is pretty broad. If you’re wearing anything related to the Qatari regime, you are representing a homophobic group, but I wouldn’t rate that as an attempt to harass or marginalize anyone.

Aggressive displays of homophobia and wearing a rainbow are not the same thing.

Wearing a rainbow isn’t hateful, and isn’t intended to threaten anybody. Displays of homophobia usually are.

Comparing the two relies on a false equivalence that is commonly used by homophobes to try to justify their hatred of others.

If the Qataris wanted to show the world how much they treasure heterosexuality in a way that didn’t seek to harm or marginalize other groups, then I don’t know why we would object.

But that’s usually not how homophobes choose to conduct themselves, funnily enough.

Here’s some of the bullshit you can read on the FIFA website, for that warm nauseous feeling:

Enable a welcoming and respectful environment for all participants and attendees at FIFA World Cup 2022™ sites and events, and promote the attendance of low income groups

For the record, context missing from the quote!

I dislike what Fifa are doing.

I get what you’re saying, I know you’re playing the devil’s advocate, and I think that’s a useful thing for all of us, to examine and challenge the way we think.

I was just trying to put it in plain terms (which I’m not very good at) why those two things would be different.

You guys, @BloodyBattleBrain is not a homophobe!

Yes, but he is a homophone for “BloodyBattleBrane”.

I don’t think people forget about it, it’s just a hopelessness in that fans can’t do anything, so we might as well just enjoy the sports. I follow the Premier League closely and the corruption is a constant discussion. But what can we do? Boycott it? Even if the diehard fans boycott matches, there are tourist to fill their seats and international TV rights to keep things going.

For me it’s getting old. FIFA BS and teams being sold to the richest oil country or oligarch. I still follow my team, but I skip most other matches and this year I am not following the WC for the first time in decades.

My own take is that having major sports events in these countries has a positive influence on FIFA and their officials wallets.

I hold to the belief that if you invite people to your country in order to have a big tournament, then you cede the right to impose restrictions like this.

If I choose to go to Saudia Arabia as a tourist, then yes I would be circumspect about supporting or being gay.

But if I’m being invited over for a supposed festival of earth, an event to celebrate that which unites and not divides us, then effin no.

Amd FIFA have pulled off the great feat of making everyone dislike them!

You guys, @BloodyBattleBrain is not a homophobe!

When I was young I pretty much was, like nearly everyone I knew.

I think the transition for me came about when i started the habit of questioning things, especially religion.

And concluding that religion is…not right about many things.

And so when religion pushes homophobia, I almost instinctively question it.

And then questioning it led to the conclusion, for me, of what’s the big deal who sleeps with who!?

I was also going through a pleasant phase of flouting religious rules on promiscuity, so why should I have all the fun!?

Throw in a healthy dose of selfishness, in the form of “does this issue really affect me, do these actions really affect me, and if not then why should I care” as applied to homosexuality, led me to really not care if some one is gay or not.

Gay is definitely not haram or damage in the mind for me.

Indeed maintaining that it is is arguably the real mind damage.

And incidentally homophobia seems to come packages with other inimical attitudes, and be espoused by unpleasant people.

So not for me, thanks.

It’s the concept of a point extended into higher dimensions.

In string theory and related theories such as supergravity theories, a brane is a physical object that generalizes the notion of a point particle to higher dimensions. Branes are dynamical objects which can propagate through spacetime according to the rules of quantum mechanics. They have mass and can have other attributes such as charge. Mathematically, branes can be represented within categories, and are studied in pure mathematics for insight into homological mirror symmetry and noncommutativ...

So far the best thing about the World Cup for me has been Joe Lycett’s take, but this is up there too. 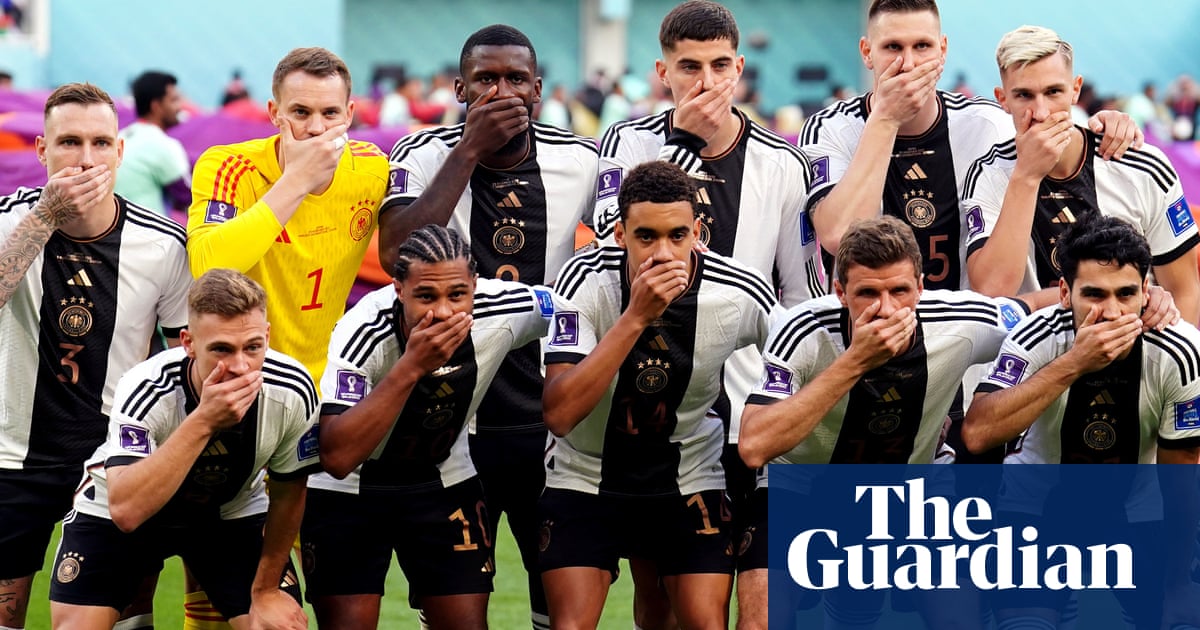 It’s so good that I think The Guardian needs to get Sean Ingle a valium before he starts comparing it to Martin Luther King’s “I Have a Dream” speech.

Indubitably. For generations to come, people will ask each other “Where were you when the German national team took that one pic where they covered their mouths?” 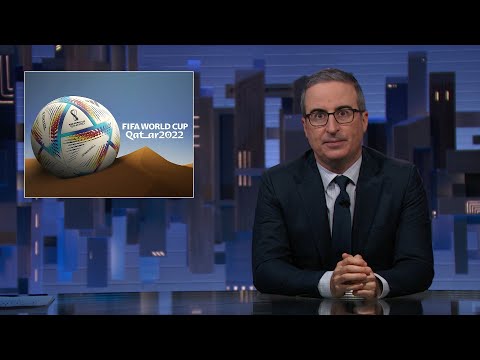 People are harsh against the teams for not standing up to FIFA more directly, but I think they have been placed in a very difficult situation where there was really no good choice. It worth noting that even in such LGBT+ friendly countries as those in Scandinavia - support for this activism is not particularly high. Generally, football fans just want to focus on the games and ignore the politics - support for activism is highest among the young and “casual” viewers.

An example can be seen in how after Denmarks draw against Tunisia, one of the big debate questions was whether all of the focus on activism had spoilt the teams focus on performing on the field.

While obviously not the second coming, I like that the German squad found a way to effectively protest FIFA’s behavior, while leaving the latter no way to retaliate. If I were German, I would be proud of the squad for that.

And I think the squads involved deserve credit for putting pressure on and being willing to talk about this (those that have), because without that willingness, FIFA would have been far more successful in sweeping the corruption and discrimination under the carpet (as Putin was able to, 4 years ago).

If the Qatari are the movers behind FIFA’s actions (as people speculate), they have been incredibly dumb because it would have been a far better strategy to have left the armbands alone.

Generally, football fans just want to focus on the games and ignore the politics - support for activism is highest among the young and “casual” viewers.

I hear where you are coming from, and you make very good points. On one thing though I have to comment, and that’s this whole canard about keeping politics out of whatever it is we are talking about. You cannot. It’s all political, and international sports is by definition highly political. In the case of football it is made even more so by the actions of FIFA and the way countries interact with FIFA. Every international match is a bit of politics in action; you cannot separate politics from the sport, or the sport from politics, except perhaps on the schoolyard or neighborhood pitch.

Oh - don’t take my comment as a defense for that viewpoint. I 100% agree that the “keep politics out of my sport” is at best wilful blindness.

I’ve decided to not follow this year’s world cup.

Come join me in making Canada’s Grey Cup a thing.

Oh - don’t take my comment as a defense for that viewpoint. I 100% agree that the “keep politics out of my sport” is at best wilful blindness.

Yeah, sorry, I wasn’t intending it as commentary on your post per se, more like in general.