Just picked this one up today. I preordered so I got the free digital comic and the soundtrack mp3s, as well as 2 free UMD cases. Have only put about 30 minutes into the game so far, so these are very early observations:

I’ll post more once I actually get into the meat of the game.

Gamespot pretty much panned it.

Death, Jr. lets you play as the teenage son of the grim reaper.

They also panned Fantasy General, so make sure you never play that. 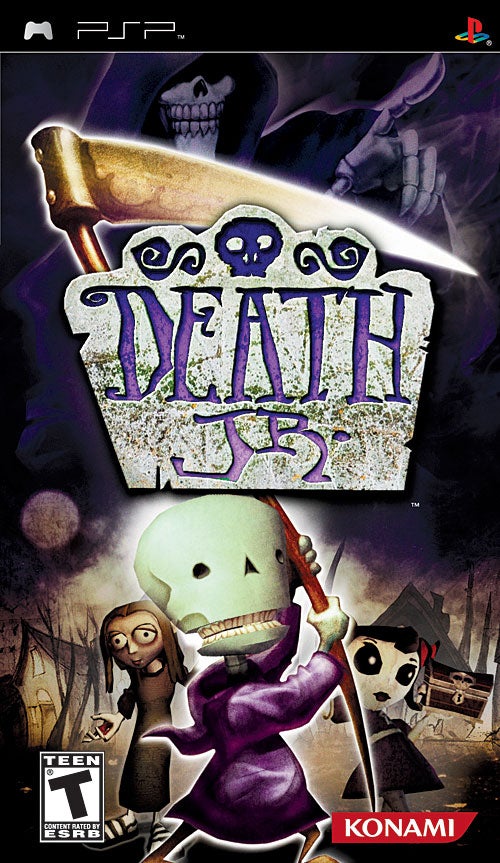 Everything you need to know about Death Jr..

Should everyone ignore these rather mediocre reviews simply because someone that posts here was involved in the game?

I think everyone should ignore any review coming from IGN, whether someone here is involved with the game or not. IGN’s reviews are teh suck, as the kids like to say. Gamespot’s reviews are generally better, but that’s like saying that listening to Muzak is better than listening to someone clean a chalkboard with a cheese grater.

If you’re asking if I’d give more weight to first-hand feedback from folks in this forum than I’d give to IGN and Gamespot, the answer is “yes.”

I can see where the Gamespot reviewer is coming from, but it sounds a bit jaded to me. Granted, I’ve only played this a short amount of time, so I can’t tell right now how accurate the score is.

Does it require a Firmware upgrade? I heard it does and meh to that.

Probably does. I think all new PSP games are shipping with v2.0 firmware now.

I thought 2.0 is the one that has the browser in it and all that. Wasn’t that supposed to be hitting the US like now?

Some time this week. I dont think it has actually been released by Sony yet though you can get the JPN version from ign or something. The sony one may have hit today though but I dont think it did.

You can get the japanese version from the japan PSP site. It installs just fine on a US PSP (I have it on mine). The only issue I’ve noticed since installing it is that I occasionally get a lockup coming out of sleep mode in Wipeout Pure.

EGM panned it as well, I believe. All three of their reviewers. And 1up and OPM. It’s pretty much getting panned across the board.

Which is a shame, because I liked what I read of Whitta’s comic.

Also, I think it’s hilarious that people are going to have to start choosing between new PSP games and emulators, and they’re probably going to stick with the emulators.

Come the European launch, us funny talking petrolheads will be happy though. I mean, we get F1, Colin McRae, Toca Race Driver 2, Ridge Racer, Need for Speed, Wipeout. I think Death Jr could do well in that environment, regardless of quality.

Come the European launch, us funny talking petrolheads will be happy though. I mean, we get F1, Colin McRae, Toca Race Driver 2, Ridge Racer, Need for Speed, Wipeout. I think Death Jr could do well in that environment, regardless of quality.

I heard the PSP is actually scheduled to launch in the Mars colony that the US is eventually going to set up before it launches in Europe.

Entirely possible. They may have released some more games for it by then, as well.

I cheated, went to the US and bought one. I even managed to fit in some other activities to make the trip wortwhile. God, I wish they’d hurry up and release some more decent games though - I’ve disagreed with a lot of the negative press some of the launch titles got and have enjoyed my time with them, but I’d really like to keep up the shiny newness with spangly new things to waste lunchtimes on.

Other guys here at work who’ve been on trips to foreign shores blessed with its release or imported them are feeling the same. This whole early adopter thing sucks this time round.

Anyway, gotta go and talk to my lawyer now, as I expect Sony’s legal team to issue cease and desist orders to me any time soon along with a request to return all hardware due to the impact I’m having on the launch they haven’t done yet.

Gamespot’s reviews are generally better, but that’s like saying that listening to Muzak is better than listening to someone clean a chalkboard with a cheese grater.

I have no problem with Gamespot’s reviews, really, but I do enjoy cleaning chalkboards with cheese graters. Don’t knock it until you’ve tried it!

Does it require a Firmware upgrade? I heard it does and meh to that.

I cant get my psp to connect to any damned wireless network any more so hell, I wont be upgrading.