Ya Snowrunner was what I couldn’t remember. It’s like that for sure. You are doing endless missions that shouldn’t be fun if you think about it, but it totally is.

You’ll look back on ‘doing missions’ so fondly :)

I played the directors cut a bit over the weekend. I didn’t really get to anything new so far going into chapter 2. Or it was so small I didn’t notice. I did notice that have DLSS on will totally crash the game. So ya don’t turn that on for now. I don’t really need it as the game runs flawlessy maxed out anyways.

I did notice that have DLSS on will totally crash the game.

I don’t think that’s normal - I have been playing for 16 hours in 4K with DLSS enabled (quality) and haven’t seen any crash or a bug of any sort.

There were a bunch of people reporting the same issue in the same exact spots. So maybe it’s certain device configurations, but it would totally bomb out on me after the burning the body in the beginning. Not a big deal as it run perfectly without it anyway.

When I played, I would occasionally experience some DLSS bugs where the sky would get that sorta weird looking swirly/mosaic-y effect going on that you can see in AI generated images (dreams).

First time I saw it, it was trippy as fuck - enough so that I thought it was some weird Kojima meta-commentary thing. Alas; just a bug.

Now I’m about to head back east. That fight with Higgs was such a typical over-the-top Japanese nonsense it hurts. First a long battle with a skyscraper monster, then a long not very exciting one-on-one battle (with two phases), then another Mortal Kombat 0-like battle, and then finally, finally a long cutscene including an ubercringe pricess peach beach run…and with all that, I still don’t really know what Higgs’ motivation was. Why did he want to speed up the extinction event? I must have missed something. Unless the answer is “because he went insane”. With Cliff it is simple, he just wants his kid.

All in all this is definitely the most detailed and brilliant fedex simulator, but it is still a fedex simulator. Give me back my witchering or night city mercenarying. 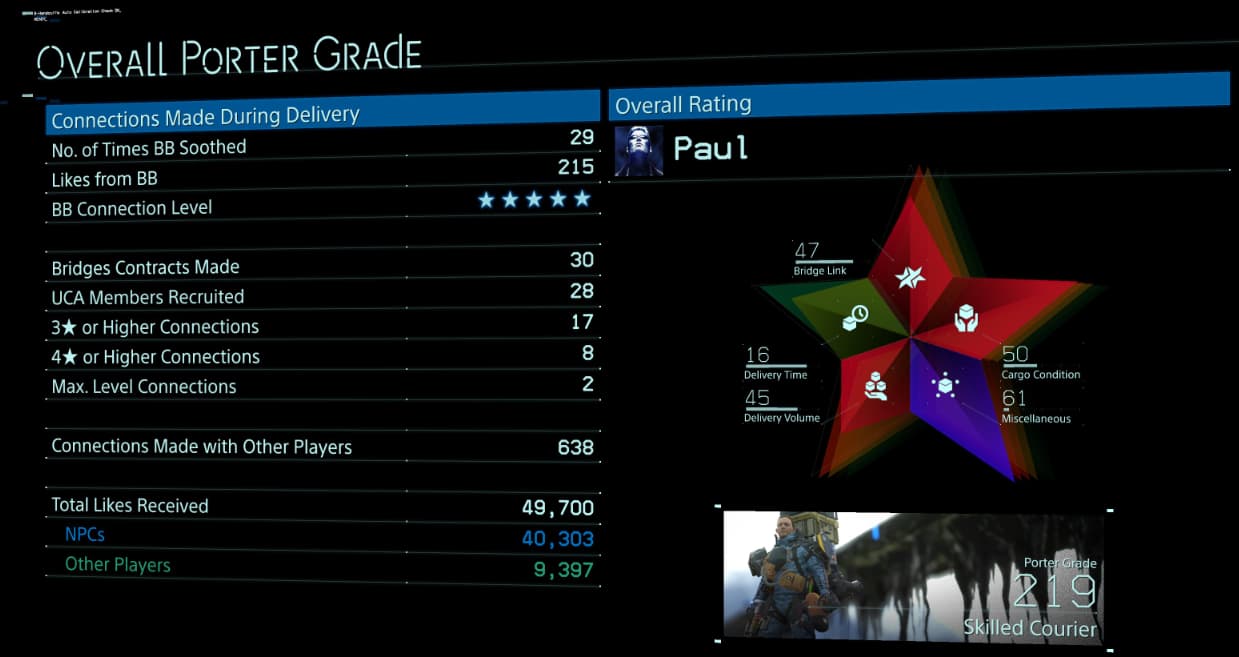 That was certainly… something. I deeply respect it but at the same time don’t quite love it.

13 days, I started playing on 30th march. But yeah, it is still quite fast :)
And about 4 hours were on Steam Deck.
Last 10 or so hours of the game I really, really wanted to be done with it and didn’t bother with any sidestuff anymore.

“Hi, I’m Seven Dead Kids Murphy. Why do they call me that? Oh, it’s a great story. I had seven kids and they all died. The first one died in a car accident. The second one in a climbing accident. The third one was illness… I think? It got hard to keep track after a while. And my first name is Murphy. Like Murphy’s Law, you know? What a coincidence, huh! But I got my name mostly because of my kids. Who are dead. All seven of them. But enough about the tragic backstory, can you deliver these underpants to South Knot city?”

I am re-reading the thread now that I finished the game and this just killed me. Well done!

I think the egregious features - a crazy plot and endless machinima-style non-interactive talky bits - kind of obscure more more basic observations. I.e. I felt that most of the game systems didn’t matter. Some really didn’t (Sandalwood for feet? Urination?) but even the key package-shuffling didn’t really add up to anything. It didn’t really matter how you transported things. Put them on your hip, your shoulder, your vehicle, your transporter, your back. It was all fine. It was harder moving things around UI screens than it was moving them around the world. There are obstacles! Which you can walk round. Hmm. A regular game with a slow walk speed, plus the ropes and ladders, would have been much the same IMO.

Building infrastructure was pretty cool but as you seldom knew where you’d be going next, building infrastructure you might be about to leave behind was kind of disincentivised. If more missions had been explicitly about building and linking, rather than getting a package to location X, I think the better parts of the game would have featured more, rather than the more basic stomping over there on foot.

Talking of the UI… deary me. When you have a bunch of options for any package - store / deliver / recycle / entrust / carry / load - they should all be available from one screen. It’s that simple. That terminal UI was just embarrassing.

If more missions had been explicitly about building and linking, rather than getting a package to location X, I think the better parts of the game would have featured more, rather than the more basic stomping over there on foot.

Yeah, I made a post upthread about the game I wish this had been, and that was more or less the gist of it. Kojima drones on and on and on about “connection,” and I feel like it would have been a much more interesting game if it had been about building infrastructure for other people to use (and I mean in your game, not the “like” system) rather than being a “literal walking simulator, lol” (which honestly it wasn’t). Very interesting but ultimately failed experiment in my opinion.

I started playing. The impression I have is that is a weird game.

You could say this is an easy observation, as both the setting premise is bonkers (but intriguing! alas I doubt it will all tie together in a satisfying fashion at the end) and the gameplay based on being a porter is fairly unique, but I was thinking more in the overall structure. The first 90 minutes are very plot and custcene heavy, as expected of Kojima, but now I’ve reached the point of starting the ‘real’ game, and it seems to be a string a cargo missions that barely will contain any cutscenes or story progression, until I guess I reach at some point a key moment which surely will invert things again and will favor cutscenes over the gameplay.

To be fair, it does actually tie things together. It is a strand game after all. Satisfying is another matter.

You either love Kojima cheese or you do not. Personally I do, although I could have done with about 75% less digitally de-aged Lindsay Wagner breathlessly begging me to “make us whole again”.

For me this game is the opposite, lol. It seems more a game geared towards doing a pair of courier missions / day.

Installed and configured this last night to play during this week off from work, burnt out on Elden Ring and figured something less action-y would be a good break. Do most PC gamers play with M+K or controller for this one?

It felt clunky with M+K, the whole selection of items and the ‘balance yourself’ thing.