I did a few invasions tonight as Julianna , people are getting better at fighting back. 3 losses in a row, then a crash to desktop! I beg you, enable multiplayer in Deathloop and embrace mortality

Don't be afraid of leaving Deathloop in Online Mode, single player fans. Embrace the pain, and receive with warmth that sudden mortal stab in the back.

Sounds exactly like what one of those sociopathic PvPers would say.

I’m personally really enjoying the PvP and have been playing with in on since release. The loot you get from beating Juliane is worth it and the setback when you lose isn’t big, although it does throw a wrench in your plan of course.

This weekend I trapped a Julianna in a very pleasant way. Set up a bunch of turrets in one of the rooms in Frank’s place. It has a ton of turrets and I also had the trinket equipped that gives you extra damage. Then intentionally got into sight of an eternalist which I believe alerts her to your location. You can imagine how quickly she died upon entering the room. Very satisfying.

I did notice while there were not enough invasions at first now the game seems to have maybe a bit too many invasions. When I was playing on Saturday I often had multiple invasions in the same loop. Felt like that balance could be tweaked a little. Max once per loop sounds like a good number to me. Maybe this is actually a sign of my loop stress increasing?

I ended up finding dealing with Julia more annoying than fun. It seemed I’d get invaded less often when it would build tension where I had a lot of residium or a new slab/upgrade and more often when I was trying to to see some story bit. 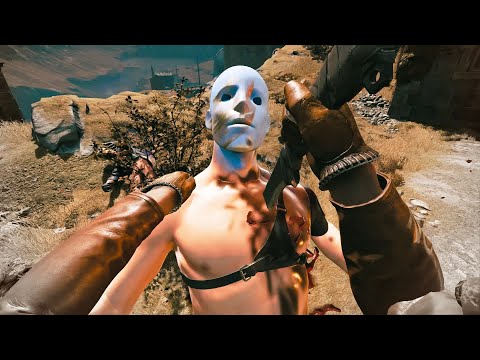 I’m now about 30 hours into this game and I got to say I do feel the loop stress increasing recently.

All of this is slowly making me switch my build to us the more aggressive Slabs and Trinkets. If I get infiltrated by a player I’m pretty much guaranteed to end up in a tough fight.

I’m now about 30 hours into this game and I got to say I do feel the loop stress increasing recently.

But it’s not supposed to be tied to the amount of time you’ve spent in the game. It’s about how many visionairies you’ve killed, and there is a very strict limit on how many you can kill before entering the final map. And at that maximum amount, it makes basically no difference.

I wonder if the game takes into consideration the weapons and slabs you have infused?

I was able to play through the final day without any meaningful pushback. I think I died once over the course of the whole day, and it was due to doing something stupid. Even the party at Alexis’ mansion was a pushover. I just waltzed in and killed everyone. gg

If the concept of “loop stress” was supposed to make the game play any differently or raise the difficulty level, I didn’t see it. Probably because I’d gotten so powerful by that point that it didn’t matter. It reminds me of how Prey petered out; by the time it was over, I could solve everything with a shotgun.

I’m just saying I do notice increased amount of enemies, increased awareness of those enemies and more bullet resilient visionaries at least. If that is a meaningful increase probably depends on how skilled of a player you are and how many power ups you have acquired.

Loop stress is the idea that as Visionaries die and the loop gets closer to being broken, the enemies supposedly get more difficult to kill. Every day, it resets to zero when all the Visionaries are resurrected. How would this be any different whether I’ve played 2 hours or 200 hours?

I’m just saying I do notice increased amount of enemies, increased awareness of those enemies and more bullet resilient visionaries at least. If that is a meaningful increase probably depends on how skilled of a player you are and how many power ups you have acquired.

I’m not following what you’re claiming here. Are you saying you’re noticing the game getting more difficult the longer you play it?

Maybe he’s having microstrokes as he plays and thus his reflexes and skill degrade over time?

Yeah I’m saying that I’m noticing that I get spotted more easily now than before for example. I sort of assumed loop stress carried over from loop to loop and keeps increasing. I think the tool tip said that dying takes the stress down by a large amount. That implies it carries over in some form - right?

But maybe this is all just perception / coincidence then. Could be down to the fact there are way more Juliana’s on the hunt now. Who knows.

Maybe the game was patched since you started playing it, which changed the game somewhat in those subtle ways?

I’m guessing that based only on my experience playing the Raven game Soldier of Fortune back at launch. You could sit in a spot and snipe enemies to your heart’s content and only the women characters would notice, running around, looking for you to shoot you, but the men would be oblivious. But apparently that bug was fixed later after I finished the game.

Owlcat broke Pathfinder, so I figured I’d fire this up again. Unlocked MP, immediately get invaded and one-shot. Tried to turn off online mode, I guess you can’t.

But you know what I can do? Turn off my wifi.

Aggro’d half the zone trying to get back to my corpse to collect my resdium (fuck Dark Souls) and perma died.

I think you are suppose to die in a game called Deathloop.

Hmm ok, In the secluded sexy time hideaway , how do you escape after flooding it, I’ve died twice there now in 2 seperate loops, lol. Or are you supposed to die?

Or are you supposed to die?

If you die, you won’t be able to kill the remaining Visionaries and break the loop! I don’t recall specifically how I got out, but it involved frantically moving upwards.